Britta Byström
Many, Yet One [world premiere performances]
Liszt
Piano Concerto No.1 in E-flat
Wagner/Lorin Maazel
The Ring Without Words

The DSO welcomed James Gaffigan as guest-conductor. He opened the programme with the second outing for Many, Yet One by Britta Byström (born in Sweden in 1977), which is “dedicated to Detroit Symphony Orchestra in return of receiving the Elaine Lebenbom Memorial Award.” The title is partly explained by many musicians becoming one orchestra, and indeed there is an element of this work being a ‘concerto’ for it, sections and individuals highlighted in music that is playful, teasing, mysterious and bright, and attractively coloured throughout, but maybe too diversionary and formless over nearly twenty minutes during which – on a first hearing – greater substance was needed to sustain interest.

Over similar dimensions, Liszt’s First Piano Concerto fits the bill, four movements in one, with ideas transformed as the piece moves along. Stephen Hough gave a classy account of the solo part, majestic and expressive, with plenty of gentleness (meltingly lovely in the slow section) and rhetoric as required, as well as elfin dexterity in the triangle-coloured third movement, and increasing in panache as the Concerto homes into its powerful conclusion. Not that Liszt neglects the orchestra, as some fine DSO contributions demonstrated as part of an absorbing collaboration that reminded of Liszt’s ingenuity. 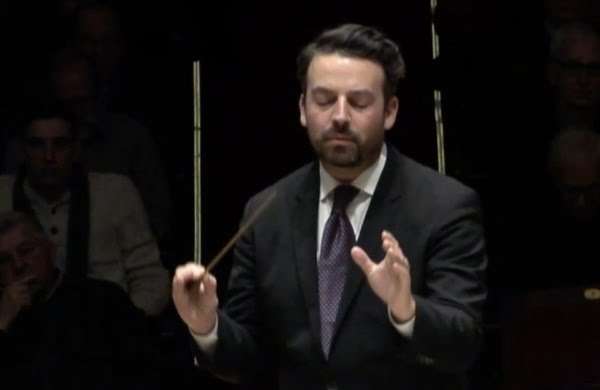 Just a few weeks ago Leonard Slatkin conducted a Mahler 9 that haunts the memory; here’s another DSO blockbuster, Gaffigan working wonders with the late Lorin Maazel’s seventy-minute Ring Without Words, Wagner’s many-hours music-dramas compressed and, as has been suggested, the forerunner of Tolkien and Game of Thrones.

This everyday tale of gods, dwarfs, deceit and manipulation, featuring Wotan, Brünnhilde and Siegfried, begins in the depths of the Rhine and enjoyed very secure horns (and, when needed, Wagner tubas) and powerful waves of string sound. The imagination was gripped and continually preyed upon for the rest of the journey. Kenneth Thompkins’s contributions on trombone are worth a mention, but whether in solos or togetherness, the DSO was on sizzling form, Gaffigan creating and driving a theatre of sound in this Maazelian condensing of Wagner’s tetralogy, most of the ‘hits’ in place – ‘Ride of the Valkyries’, ‘Forest Murmurs’, ‘Siegfried’s Rhine Journey’, ‘Siegfried’s Funeral Music’, ‘Brünnhilde’s Immolation’ – for a musical banquet both thrilling and moving. Maybe it’s to Gaffigan that Slatkin will pass the DSO music director’s golden ring of office.