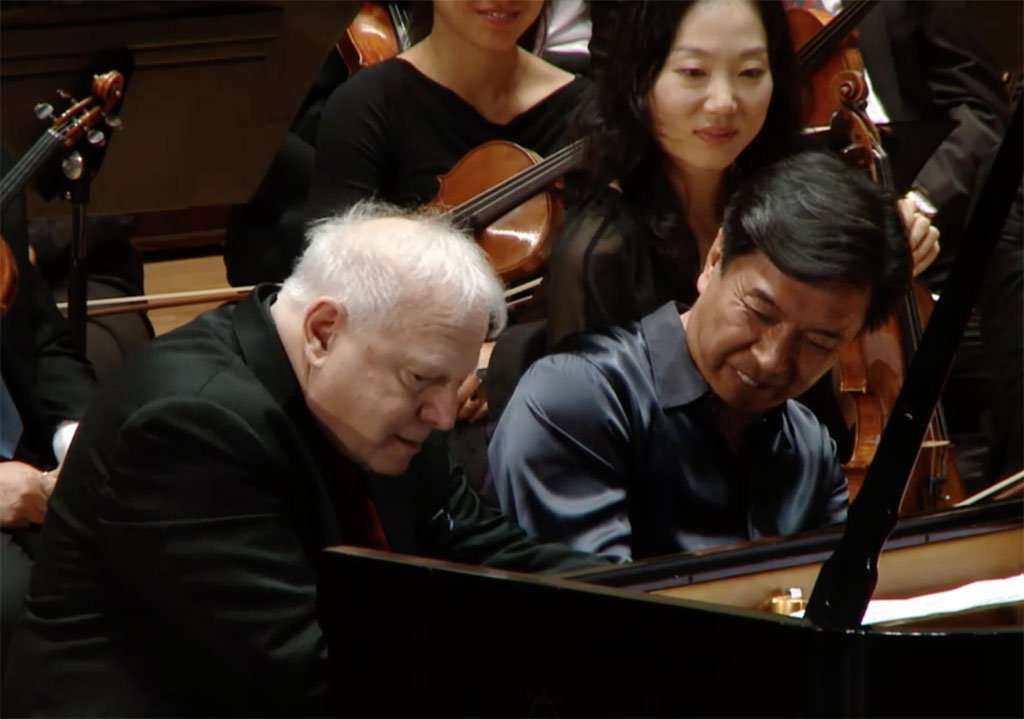 It is said that oil and water do not mix. Introduce an upper-case O and W, and an ampersand, and you get Juliet Palmer’s Oil & Water. However these ingredients are musically represented, if they are, the New Zealander (born 1967 in Auckland) has composed a sizeable piece in terms of length (seventeen minutes) but not necessarily one of substance. In this work, here given the third of three premiere performances, Palmer has responded to a DSO/Lebenbom commission with the impression of painterly if discursive brushstrokes, and effects, and therefore not adding up to a full canvas.

The piece’s genesis is illuminated by the composer’s written intro (extracted from): “Water flows between the Great Lakes cities of Detroit and Toronto, where I live. Looking at the map, I am reminded of the powerful work of Ojibway Elder Josephine Mandamin, who has walked around each of the Great Lakes to honor and pray for the water. Her dedication made me wonder how a piece of orchestral music could weave together places and stories relating to the struggle for clean water. Oil & Water journeys through field recordings chronicling the ecological and the political watershed: the voices of protestors at Standing Rock, holding steadfast against police water cannons; the shouts of Detroit’s citizens blocking the water shutoff trucks; mechanical hums and thrums of Toronto’s water pumping station; the exuberant rhythms of Crazy Woman Creek in Wyoming’s Bighorn Mountains; the chants of citizens defending the Salish Sea from increased oil tanker traffic; and the rhythmic counterpoint of spring peepers in Ottawa’s Mer Bleue wetland. Traditional teachings remind us that water never gives up, overcoming all obstacles in its way. May we do water justice.”

Laudable aims, ecologically and politically, but musically somewhat diffuse, doodles, surreal musical-theatre rather than symphonic reach, and incorporating recordings of protesters. It’s music that each one of us will make something different of (there was though little picturesque or musically engaging for me, shouting voices no more than that, their words mostly indistinct anyway). Whether the piece stirs any one of us to go beyond it and play a part in reducing pollution, who’s to say, but I hope so; important subject though, and Palmer is to be applauded for bringing these issues to our attention; and it’s that message that stays in the consciousness, so too the work’s desolate ending, a chilling warning made through music.

Makoto Ozone is best-known in the jazz world, although he plays the classical stuff too – including several Mozart Concertos as well as Leonard Bernstein’s Age of Anxiety, George Gershwin (Concerto in F and Rhapsody in Blue), Ravel (G-major) and Prokofiev (No.3). He’s new to me in terms of knowing his artistry and I understood in advance that he is prone to adding bits of his own, which is what he did during Paganini Rhapsody. Maybe the end of that sentence demands an exclamation mark; and, given Rachmaninov’s score is through-composed, rigorous, and ingenious on its own terms, if Ozone was going to punctuate the work with some improvisations, how? (Why?) 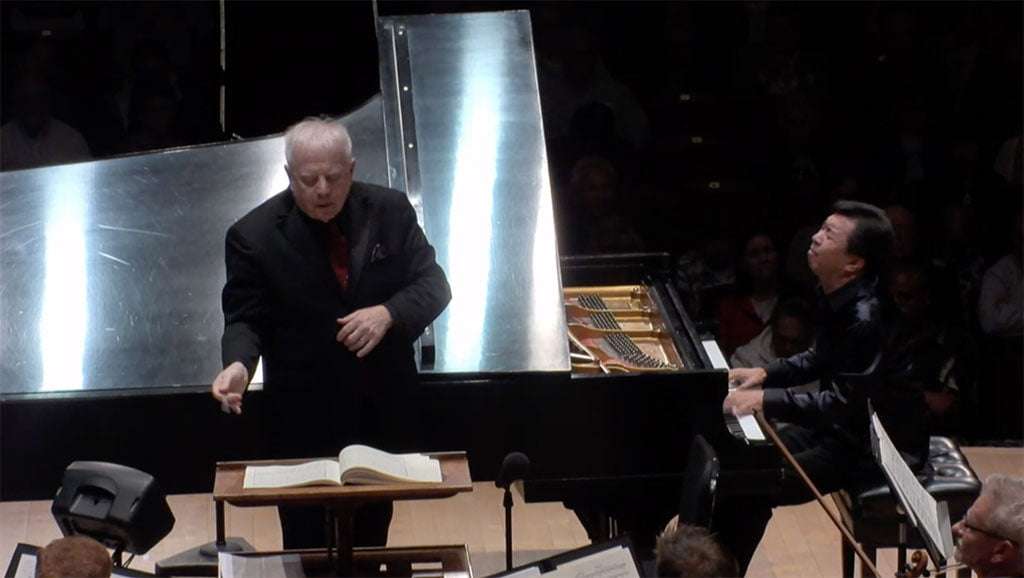 Well, in league with Leonard Slatkin, who of course had to know in advance where Ozone’s diversions would occur, such additions proved inoffensive and, in some respects, integral – but why interfere with a masterpiece (although Cameron Carpenter has been playing ‘Pag Rhap’ on an organ of late – I wonder if the composer is now that bit more of Stravinsky’s identified “scowl” these days).

Nevertheless, praise where it is due, for Ozone was superb in his handling of Rachmaninov’s notation and demands, a masterclass of non-showy playing, and he displayed an unobtrusive mastery of the notes.

With my ears on red alert, I mostly heard a personal reading of the piano writing – thoughtful, expressive – rather than twists and additions, although there were some of the latter, such as cadenza-like departures, and chords with an extra ‘blues’ note: stylish in effect, certainly inoffensive if also without adding anything significant. There was more to admire in Ozone’s playing than not, an engaging personality at work, at once sensitive to the task at hand and bringing freshness to something familiar, not least Variation XVIII, here seductive and rapturous, Ozone going his own way at the end of it, musing on what had gone before. There was much that scintillated, too, including a brief passage in the home-straight that suggested Liszt and Oscar Peterson had got together, without Ozone claiming bragging rights; and he couldn’t have had a more open-minded or sympathetic collaborator than Slatkin. I guess, given Rachmaninov often disregarded his own directions, and brought distinctive re-creation to other composers’ music, maybe the Russian would have understood Ozone’s endeavours. I for one would like to hear this performance again … cue DSO Replay.

Encore time. Ozone and Slatkin then teamed up, piano/four hands, for George Gershwin’s Prelude No.2 – but not as any of us know it: musical cabaret; musical chairs, too, Slatkin starting alone at the bass end and ending up at the treble – was that a bit of Vaughan Williams that Slatkin stuck in at one point. Rhetorical question, for probably not, but I heard something that called to mind that composer; and as the camera scanned the watching DSO its members looked spellbound at what their Music Director Laureate and guest pianist were up to.

This was a ‘complete’ concert in that it embraced something new, had an intriguing slant on a repertoire staple, a tasty encore, and – for the Bartók – a mention for and illustration of the Concerto for Orchestra’s original ending. Bartók wrote Concerto for Orchestra in 1943 (the year Rachmaninov died) for Koussevitzky and the Boston Symphony. The premiere occurred late the following year (and the piece reached Detroit in 1953 conducted by Antal Dorati). The conclusion in Boston had been rather brusque, pithy, whereas Bartók’s revision is much grander; we got that too in Slatkin’s intro.

Naturally enough, in the complete performance, Slatkin wrapped things with the latter ending, but it was instructive to hear again (he recorded it in St Louis) the composer’s first thought prior to the whole thing, and this account from Detroit was terrific, Slatkin and DSO at the top of their game. Indeed, from the first bar to the last, it was an utterly compelling reading, digging deep into the first movement’s expression, emotions, contrasts and exultations, in music overall that is more akin to a five-movement Symphony (ideas, developments, direction) if orchestrated in a manner in-keeping with the official title. It was good to hear ‘Game of the couples’ given its Allegretto marking (Solti thought he was on to something when he speeded it up); from Slatkin it was time for syncopation and a touch of ribaldry; how different the solemn brass chorale at the mid-point – beautifully played – but then the DSO, whether solo or tutti, was in great form, not just for a virtuosic rendering of the notes, but for a collegiate range of dynamics, touches and colours.

At the heart of Concerto for Orchestra is the shadowy and (scream-of-pain) eruptive ‘Elegy’, really explored here, with significance; and if you want to know Bartók’s reaction to Shostakovich, and his to Hitler’s Lehár, as in the Russian’s ‘Leningrad’ Symphony, then all is revealed in the ‘Interrupted Intermezzo’, including through trombones’ ‘raspberries’, bookended by Bartók’s homesickness for Hungary, intensely moulded here. There was a festive feel to the final movement, its articulacy intact, and making a virtue out of formal procedures, before exhilaration, then a descent to mistiness, from which – like a phoenix rising and with the already-established musical through-line maintained – it was clear that something momentous had been saved for the end. ★★★★★

This was not only the final concert of the DSO’s 18-19 subscription season but a farewell to concertmaster Yoonshin Song who is off to Houston to take a similar position. All the best to her.

DSO 19-20 opens October 4-6, Michael Francis conducting Oberon Overture and Beethoven’s Fifth together with Concertos for Two Pianos (Mozart) and Three (Bach), with the Naughton sisters plus a friend, and Leonard Slatkin returns November 15-17. Here’s to another wave of webcasts.