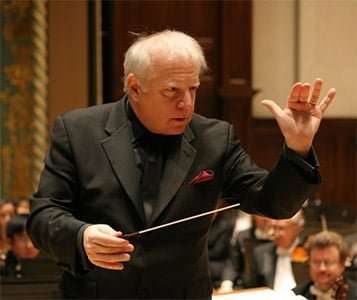 Given the recent extravaganza of introducing David Del Tredici’s Dum Dee Tweedle (review-link below), you might have fancied that this week the Detroit Symphony Orchestra and Leonard Slatkin would have opted for familiar fare. Not a bit if it. In front of Brahms’s final Symphony was further Americana, an Aaron Copland rarity from 1934 and Mason Bates’s recent Violin Concerto written for Anne Akiko Meyers.

The Copland is a substantial ballet score, lasting here 35 minutes (a little longer than in Oliver Knussen’s recording of it). The original version for large orchestra seems no longer performable due to the parts being illegible. So Slatkin conducted the version that the composer made the following year for a smaller ensemble. All the orchestral sections are represented, however, the music itself vivid and varied, from racy to seductive, to match the detailed courtroom scenario. “A parody of the judicial system”, said Slatkin in his introduction, we aurally witness a nightclub murder case through this exhaustive score, with lawyers, the accused, and the witnesses with conflicting evidence.

Opening with a flurry, it’s soon clear that this is a jazzy piece, dating from the 1920s or 1930s, George Antheil (like Copland, born in 1900) perhaps the most likely candidate. Mechanistic Paris might also come to mind (Copland studied there with Nadia Boulanger), and one could speculate that the creator knew some Prokofiev, Chout (1921) maybe. Hear Ye! is a fascinating score, full of character, wit and whimsy, always moving forward and also bringing in local colour, such as the bang of the Judge’s gavel, and it swings too – flashbacks at the trial allow for a cabaret atmosphere and dancing girls – another George, Gershwin, coming to mind. Hear Ye! was done proud here and it was good to hear it (again). Come the end, I felt a rumble of West Side Story, then twenty years away. 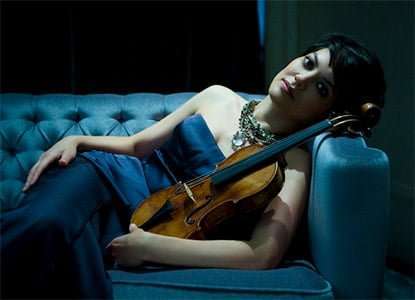 Good too to catch Mason Bates’s Violin Concerto (2012), which seems to be doing the rounds. Understandably, for the slinky rhythms of the first movement (‘Archeoptertyx’) immediately grab the attention. The soloist emerges from the exotic texture and from there the rhythmic variety, interplay and soaring lyricism (the latter attractively oldie-worldly, reminding of Menotti’s Violin Concerto, lovely work) engage the senses. This segues nicely into the slow movement ‘Lakebed memories’, which is peaceful and enchanted. The finale of this continuous 25-minute piece, ‘The rise of the birds’, returns to rhythmic fecundity; the movement grows and grows, re-visiting lyrical material via a freewheeling cadenza. Anne Akiko Meyers gave a musically innate and technically immaculate account of this entrancing and arresting work, slickly accompanied here. Good to report that Bates’s Violin Concerto was recently recorded in London by this violinist and this conductor (who were both present at the Pittsburgh birth) with the LSO; expect a release September time together with music by Samuel Barber and John Corigliano.

Slatkin’s view of Brahms 4 was overall direct, formal and stoical; no sigh at the very opening, the first movement was bracing and ardent, yet also given ebb and flow and light and shade, the coda intensified rather than accelerated through. The second movement proved really special, very much taken on the moderato side of Andante the music glowed with heartfelt expression on a magic carpet of sound. By contrast the scherzo was robust and also ribald enough to justify Brahms’s giocoso marking. As for the great Bach-related passacaglia finale, this was deeply expressive, grand and granitic, with David Buck’s playing of the flute solo especially beguiling.

This was a two-concert day for the Detroiters and their maestro; this review is of the morning showing, there is a second shot tonight and a third tomorrow evening.