The lyrics are Bob Dylan’s, the music is John Corigliano’s, the shared title being Mr. Tambourine Man. Thus in 2000, for Sylvia McNair, with piano, Corigliano re-set (with permission) some of Dylan’s iconic texts, already used in his hit songs, which Corigliano was not familiar with, and three years later he made this orchestral version for Hila Plitmann.

Of the seven settings, the titular opening is very expressive, the words set with care and sung here with feeling and clarity, different of course to Dylan’s version, but no less valid or communicative, especially with an orchestration so vibrant and colourful. From Corigliano ‘Clothes Line’ corresponds musically to Samuel Barber’s Knoxville in terms of nostalgia and to Leonard Bernstein at his most-tender and poignant, whereas ‘Blowin’ in the Wind’ shares solemn brass chords with Shostakovich and builds a palpable increase of intensity. ‘Masters of War’ – angular, agitated, anguished – was shaking with commotion and emotion by its close, and ‘All Along the Watchtower’ (later covered by Jimi Hendrix) is darkly coloured and includes a night-time-suggesting baritone saxophone. ‘Chimes of Freedom’ proved to be equally mesmeric, scored with sets of bells on the platform and at two points in the auditorium, whereas the final ‘Forever Young’, partly unaccompanied for the singer, carries with it the aspirations of ‘Make Our Garden Grow’ from Candide. 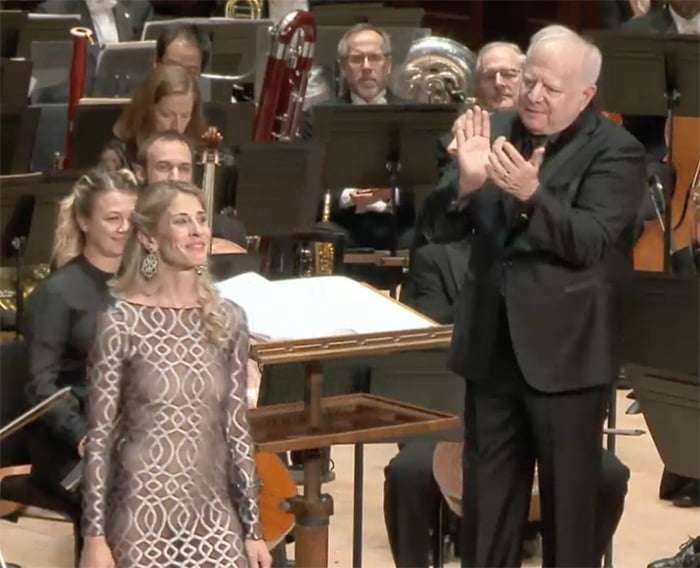 This was a first performance for me of Mr. Tambourine Man, although there is a recording with this singer on Naxos (8.559331), JoAnn Falletta conducting. Hila Plitmann in Detroit was amazing. Whether she needed to move around is one thing, for through the clearly enunciated words and unstinting devotion to the music – the one made indivisible from the other – she was anyway vocally and dramatically unassailable. Mr. Tambourine Man is an inspired piece and sustains its near-on forty minutes completely and compellingly. Corigliano (born 1938) and Dylan (1941) proved made for each other, so too Plitmann and Leonard Slatkin; together they conspired something special over the airwaves, aided by the Al Glancy Control Room.

Beethoven 9 was the perfect complement in also expressing timeless objectives. Slatkin led a spacious and majestic outing for the first movement – articulate, assured – the tempestuous climax inevitable, with often-obscured string detailing shining through, the conductor as attuned to the intimacies of the music as to its outspoken ones. The Scherzo danced with vitality, and the second repeat was observed (I am always glad of that), while the Trio lilted with grace and resonated with Elysian expression … and then the return of the Scherzo, minus, this time, its opening bars (as Slatkin had done in 2013 as part of the DSO’s complete Beethoven cycle); don’t tell the composer, but this rather surreptitious homecoming works very well.

The Adagio glowed – Gesangvoll – with the Andante contrasts nicely gauged. Poetic woodwinds and soothing strings, not forgetting a mellifluous fourth-horn solo from Joanna Yarborough, contributed to something blissful … blown away by the straight-in confrontational dissonance that opens the Finale, requiring the eventual moderation of Peixin Chen, commanding with Beethoven’s words “O Freunde, nicht diese Töne”. The rest of the ‘Choral’ is Schiller, of which Slatkin led an earthy and optimistic reading – cosmopolitan – with the Turkish episode swaggering nicely, Sean Panikkar, wide-eyed of voice (so to speak), the whole developing and enveloping to a joyful coming-together, the UMS Choral Union swelling such fraternal feelings.

If Slatkin took a traditional view of the Symphony (not dissimilar to Klemperer, try a great concert performance of his on Testament SBT1177) then there were also numerous individual touches to appreciate, the whole satisfying and celebratory: just what the doctor ordered if better than anything available on prescription, let alone not on one. This was the second of four presentations of this DSO programme: Saturday evening and Sunday afternoon remain.