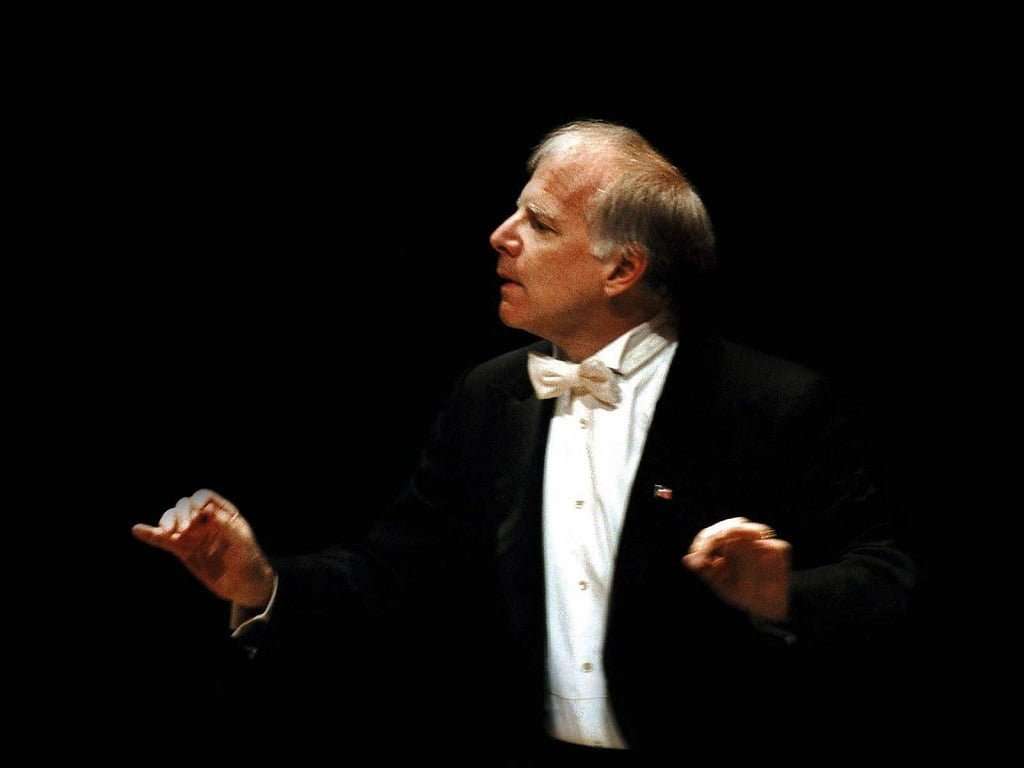 “Most of us don’t want to be outsiders.” Maybe Charles Ives wasn’t worried about being so when it came to his music (experimental, visionary, and rarely performed during his lifetime). In any case, he was a successful businessman, and he was also a sports fan, both playing and watching it. An alumnus of Yale, in 1897 Ives took part in a football match against Princeton. He set the game to music, with crowd cheers, indigenous ditties, and heavily annotated the score with written descriptions. As read out by Leonard Slatkin, “blue-stocking girls and men” stays in the memory. Was this the post-match entertainment? As Slatkin said, he took longer to introduce the piece than it takes to play, not quite reaching three minutes. The music is recognisably Ivesian, as physical as the fixture itself, dissonant but image-forming, starting in mists, ending in mid-air, those popular songs embedded intrinsically into the piece: a sort of Fourth of July or Decoration Day for the sports field. By the way, Yale won Six-Nil.

Cindy McTee’s Solstice (completed on that day in 2007) is for trombone and an orchestra of strings, brass and percussion. This is ambient and active music, the trombonist requiring agility, but no mutes of any kind, the rhythmically engaging first movement leading to an intense Adagio, trombone as yearning tunesmith and private muse, also a little filmic, and then to a rumbustious finale, the soloist issuing a wake-up call after the previous lonely night. Here the music is industrially coloured, syncopating into big-band territory as this capricious 20-minute score strides confidently to a grandstand finish … but no, McTee has a rug to pull from under the listener’s ears, for the music dissolves to musing again and fades to nothing. Good piece, superbly played by Kenneth Thompkins (principal since 1997) and backed to the hilt by his DSO colleagues.

Indeed, all of this (morning) concert’s front-of-stage soloists are DSO members, and they each distinguished themselves. Confession time, I misappropriated the quotation that heads this review. It’s from Julian Fellowes and in fact tops Leonard Slatkin’s programme-note for his Endgames, the title (if no more) owing to Samuel Beckett, and which one might read into it some sort of pessimism. Not a bit of it, for Slatkin, who composes “for fun”, and was here found as a conductor and a creator talking to one another in a wacky filmed introduction to this second performance, the world-premiere having been the previous evening.

Endgames celebrates those instruments “that fall slightly under the orchestral radar” and the musicians that play them. To my mind, the opening ripieno (strings) and its recurring variants recall the beginning of Messiaen’s Turangalîla. Each of the woodwinds is introduced in turn, sultry alto-flute, plaintive cor anglais (English horn)… as part of a jaunty, delightfully whimsical first movement. The slow one that follows tenderly expresses itself and sucks the listener into something generous and poignant, the sort of heart-tugging eloquence that American composers do so well; I was reminded of William Schuman. As for the finale, in which the soloists get little turns with quotations from other works as scored for them, I can (shamefully) only name two: from Strauss’s Till Eulenspiegel (E-flat clarinet) and Dukas’s The Sorcerer’s Apprentice (contrabassoon); I am on the hunt for the other four! As it is the cleverly titled Endgames (on a par in this respect with Slatkin’s Housewarming, played during the 1998 BBC Proms season) is a feel-good gem. Slatkin the composer revealed to Slatkin the conductor that he has an idea for a piece with Mahler and Johann Strauss II connections … Das Lied von Alten Wien, Des Knaben auf der Donau, maybe. I expect he’ll trump me in the titular stakes.

After the interval, music by Benjamin Lees (1924-2010), his Concerto for String Quartet and Orchestra, composed in 1965 but not a score I have come across before. What a discovery! For all of Lees’s use of a large orchestra, he never overpowers the string-players, not even in the brusque and invigorating first movement, neoclassical in style and brightly and lucidly scored, inviting correspondences with Hindemith and Stravinsky as the music pursues its energetic course. Perhaps Walter Piston is a closer reference; I wonder though what his ‘status’ currently is in his homeland. Lees’s expressive (rather mournful) slow movement has an Oriental feel to it (by coincidence, Lees was born in China), and the finale is as energetic and focused as the opening movement, marching proudly to its conclusion, with increasing animation.

Finally, to close this enterprising and rewarding programme, a joyous account of An American in Paris, my desert-island George Gershwin masterpiece – music that Slatkin has in his blood and bones. Street scenes, boulevards, romance, exhilaration, different times, sites and locations; they were all here, conducted masterfully and played stylishly with swing, scintillation and sensitivity. As it happens, Gershwin includes at least three of those ‘outsider’ Endgames instruments – piccolo, bass clarinet and cor anglais (the latter being French to us Brits, yet English to the Americans) – and not forgetting three saxophones.