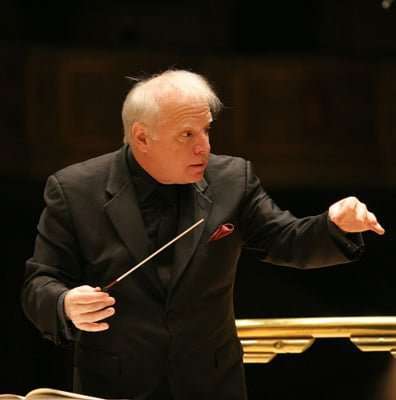 This “Super Saturday” (morning) concert went very well, a fine introduction for young folk to the joys of music and the untouchable experience of the concert-hall … being there. Leonard Slatkin was an avuncular host – and a granddad, too; read on. A burst of Leroy Anderson’s Sleigh Ride made for a lively and seasonal start. This cued some visual horse-play: a big screen was present in the Hall, which the Internet viewer was cut into. Bumblebees, Swans and Elephants also came out to play, courtesy of Rimsky-Korsakov and a Carnival-minded Saint-Saëns.

Slatkin invited members of his orchestra to imitate animals – well, through their instruments. (You couldn’t make this up!) Ergo, Kevin’s double bass became a seagull’s cry (very real), Jeren’s oboe reed was a rooster (a wake-up call) and percussionist Joe was active on the Lion’s Roar (should have played some Varèse). Returning to the front of the orchestra, our matinee maestro invited the concertmaster to turn his violin into a mouse; not sure about the snap of the trap though, too realistic, and just to emphasise the ah-factor, a cute little Mickey popped up on the screen.

For Peter Schickele’s A Zoo called Earth (1970), Slatkin returned to one of his many premieres. It’s not an alien piece, well, in fact it is: “an alien comes to visit the planet earth, trying to decide if he should move here!”. Plenty of images were projected, there was a deep resonant voice, from outer space – maybe a leftover from Star Trek or Doctor Who – describing fish, amphibians and dinosaurs, to music hypnotically chiming, jazzy, rhythmically hip-swinging, eerie (dinosaurs, presented as watercolours). For us two-legged beings, Schickele musically seemed to look to Copland’s score for The Red Pony; well, it is an animal.

Then came more Leroy A, his Waltzing Cat, with audience participation. Meow! (News flash, Slatkin has recorded all of Anderson’s charming and inventive orchestral music for Naxos.) There’s a cat in Peter and the Wolf (Петя и волк, Petya i volk), composed in 1936 by Prokofiev to his own text in order to introduce the orchestra through a good story. No screen images this time (good idea); this is music for the imagination. With DSO soloists semi-circled in front of the conductor – flute as bird, oboe/duck, clarinet/cat, bassoon (the granddaddy of instruments), horns in a wolfish starring role, gun-shot timpani as its hunter nemesis, and Peter with plenty of strings attached.

Narrators for Peter and the Wolf have included Bill Clinton, Sophia Loren, David Attenborough, Dame Edna Everage, Sharon Stone, Patrick Stewart and Sting. It was now the turn of Damon Gupton, a musician and actor (Suits, The Divide, Prime Suspect, Newsroom, Law & Order). He related the tale without exaggeration, but invitingly, and the whole went swimmingly, not least the LOL moments when Leonard Slatkin revealed previously unsuspected thespian skills … yes, you’ve guessed it, he was Grandfather.

Eighty years young, Peter and the Wolf is still a winner, for children of all ages. It here completed an hour’s nourishing entertainment. Me, going on older, I had a whale of a time.