A Symphony written during World War Two and music composed to commemorate the First such conflict bookended one of the greatest solaces in musical literature, Beethoven’s poetic, lyrical and (finally) sparkling Fourth Piano Concerto, its middle movement representing Orpheus taming wild beasts, Liszt and others imagined. In this painterly scene, Ludovic Morlot’s forceful challenge, DSO strings appropriately brusque, found Hélène Grimaud with a rather matter-of-fact and even messy response, gradually suppressing the aggressors (of course, the music is written thus) if without consequence on this occasion. 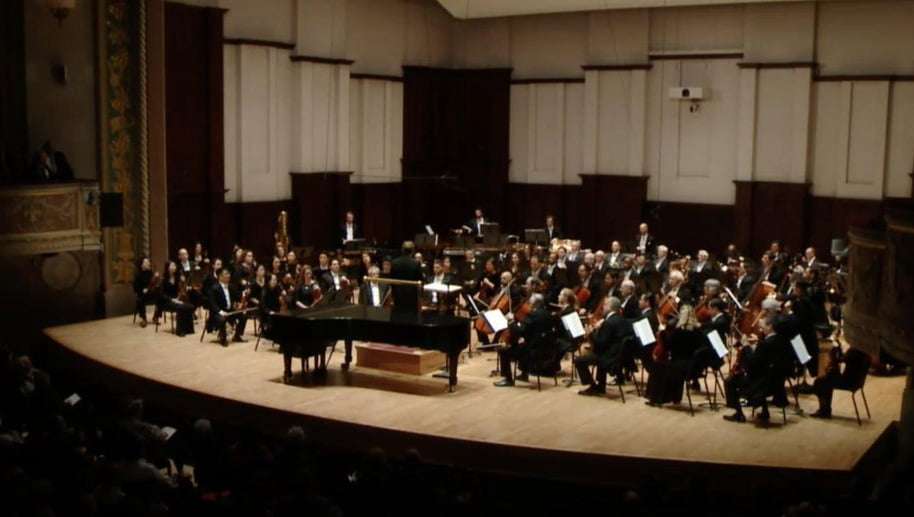 But we didn’t get the expected live performance due to a “rights issue”. Instead it was a “live audio recording” from the day before with these artists. I was happy to listen (LvB PC4 is a desert-island choice), yet this is not the first time that a DSO webcast featuring Grimaud has been scuppered; however it’s an improvement on the Brahms No.2 (February 2016, Leonard Slatkin conducting) which, although it took place, we didn’t get at all. So, as recorded, if with a lack of presence for the orchestra and with a thin-sounding and noisy-pedal piano, Grimaud and Morlot conspired some sort of spaciousness (there was some restlessness too) for the first movement. Grimaud opted for the ‘usual’ cadenza of Beethoven’s two, a shame for the other one rarely turns up; it used to from Gilels (deceased) and Brendel (retired). The Finale was a bit scrambled and thumpy. On a commercial basis, this recording would stand no chance; even as a one-off gap-filler, I am surprised Grimaud approved its usage. Despite cheers and bravos from the Friday-morning crowd, this was an undistinguished account. Maybe Grimaud anticipated it getting worse for Saturday-evening; ironically, during the interval, Charles Greenwell (co-host) seemed bowled-over by what he’d just heard and us viewers had been denied!

Meanwhile, back at the concert’s commencement, the Seattle Symphony co-commissioned (Morlot, music director) Sebastian Currier’s Divisions (2014, the centenary of the start of WWI; divisions, a word for disagreement leading to hostilities, also a militaristic term and a musical one). Currier (born 1959) issues many a mood-swing – warnings, agitation, desolation, even lightness; quite filmic in cut-crossing descriptions and somewhat dissonant in language, such a quick-change approach rules out any chance to find wholeness, although War itself is of course on red-alert unpredictable danger, and this large-orchestra sixteen-minute piece enacts a drama and (cue lone trumpet and lamenting strings) a trepidation that is the music’s justification, with consonance sorrow for the fallen – poignant – and emotional clamour against outrage. As a human response to inhumanity, Divisions does its job while leaving a sense of menace lurking.

Now, fast-forward to the concert’s conclusion, Prokofiev 5: “I conceived it as a symphony of the grandeur of the human spirit”, the composer wrote in 1944, not knowing that WWII would cease the following year (a few months following the Moscow premiere). Although Prokofiev is true to his stated intentions, there is also an ominous and eruptive slow movement, and the Symphony ends with a mechanistic sting in the tail. (If not necessarily all of these things here.) Morlot looked into the music’s endeavour, gloom and vision, the DSO responsive to his dynamic conducting (if not as exacting in matters of ensemble as it can be); an expansive, lucidly detailed first movement, pensive, lofty and cathartic, with a sure sense of contour, direction and climax; a pointed, balletic Scherzo (if a laboured Trio and with an exaggeratedly gawky start to the coda); a rather too ‘easy’ Adagio (here leaning to Andante moderato), although greater gravitas did arrive, emotional tables turned; and a Finale, introduced eloquently, that danced gracefully and reached a spirited/playful last lap, violins unusually prominent.