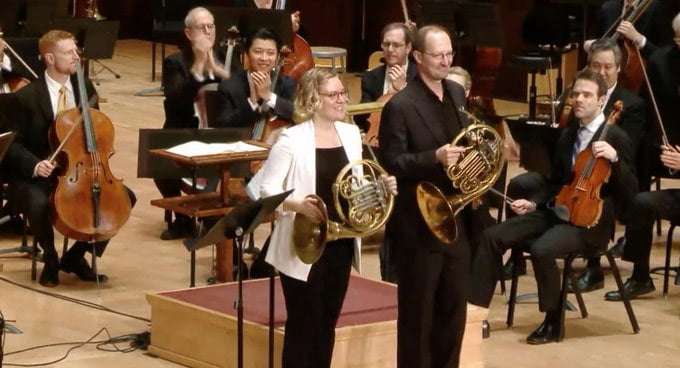 Passacaglia – an ancient form, newly approached by Anton Webern in 1908 and utilised with Baroque reverence by Johannes Brahms in 1885 to conclude his ultimate Symphony.

To open this DSO morning concert, beamed free to the World (après-midi for me), Simone Young led an organised account of the Webern (only now with this piece did he feel he’d written music worthy of publication; even Im Sommerwind didn’t make it into his select catalogue of thirty-one pieces).

Following a seductive opening flute solo from Sharon Sparrow, and ten minutes of scrupulous attention to detail to match Webern’s rigorous approach if (at that stage of his creativity) without him ditching over-spilling romanticism, a quality made much of by Young, his large-orchestra scoring allowed certain players to pack their instruments away and depart the Hall.

This particular Concerto for Two Horns (its history worthy of Sherlock Holmes’s magnifying glass) might be by Joseph Haydn. It could equally be by his brother Michael, and Antonio Rosetti (1750-92, Bohemian by birth as Franz Anton Rösler) is also in the running. Whoever composed it (with strings, pairs of oboes and a couple of orchestral horns as accompaniment) – and, if him, it’s far from being vintage F. J. Haydn – the three-movement Concerto is attractive enough if also forgettable. More pertinently it’s a challenge for the soloists with lots of notes (plenty of them stratospheric) and decorations to negotiate, which Karl Pituch (DSO principal) and his colleague Johanna Yarbrough essayed with distinction, whether rasping or being mellifluously tuneful, the latter applying most to the serenade-like if darkly-edged middle movement. The Finale is the epitome of a-hunting-we-will-go music.

The Brahms received a flowing, lyrically-inclined account, one of ardour and robust symphonic thrust, sure of itself – until the speed-up for the coda, electrifying at first (if a bit scrambled) but then braked-upon in less than dignified terms. The slow movement was a little stodgy and somnambulant, if not without impetus and tenderness when required. The Scherzo powered along (hard-pressed) – not much sense of the giocoso marking – and with some elephantising (not a word, but it’s appropriate) of a few measures that came across as out of context. Greater success with the passacaglia Finale, its ebb and flow (reflection and energy), and solemnity, and tragedy (according to Karajan), well-fitted, and flautist Sparrow was again notable. The coda was edge-of-the-abyss stuff … but did it all add up?