Wagner
Rienzi – Opera in five Acts to a libretto by the composer after Edward George Bulwer-Lytton’s novel Rienzi, or The Last of the Tribunes [sung in German, with German and English surtitles] 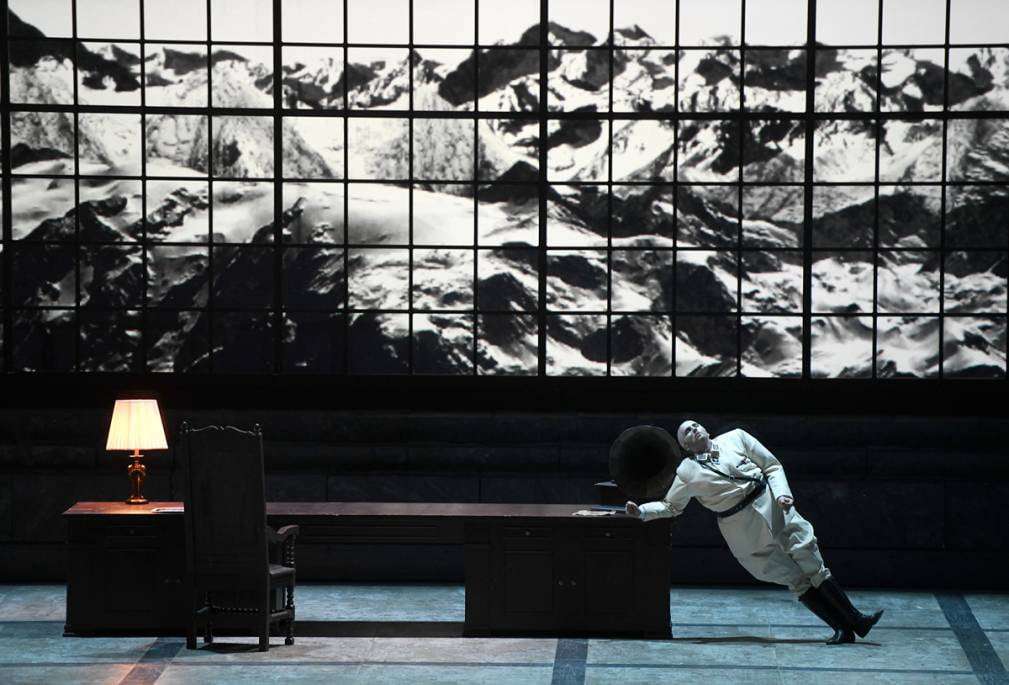 Although Rienzi does not belong to the canon of Wagner’s Bayreuth-worthy operas and does not receive many performances anyway, its Overture is encountered frequently enough in the concert hall. Another fact well-known to music lovers about Wagner’s early attempt at grand opera – a format he soon superseded in favour of his more innovative theories around the organic unity of the arts in Gesamtkunstwerk (Total Art Form) starting with The Flying Dutchman – is that Adolf Hitler strongly identified with its heroic narrative of a would-be leader of the people in a time of social and political chorus, offering “strong and stable” control (for want of a better term).

In a time of more hopeful, untainted idealism, as Wagner lived through in the decades immediately preceding German unification, one can indeed see the appeal of the historical episode concerned, as Rienzi promotes himself as the tribune of the Roman people during a power vacuum in fourteenth-century Rome whilst the Papacy resided in Avignon, only to be brought down by a conspiracy of the aristocratic old-guard. After so many failed attempts at revolution in so many countries, promising to usher in Utopia, in the century-and-half or so since its composition, the opera may well be fair game for directorial subversion, interpreting the title-character’s claims to leadership as demagoguery and populism. 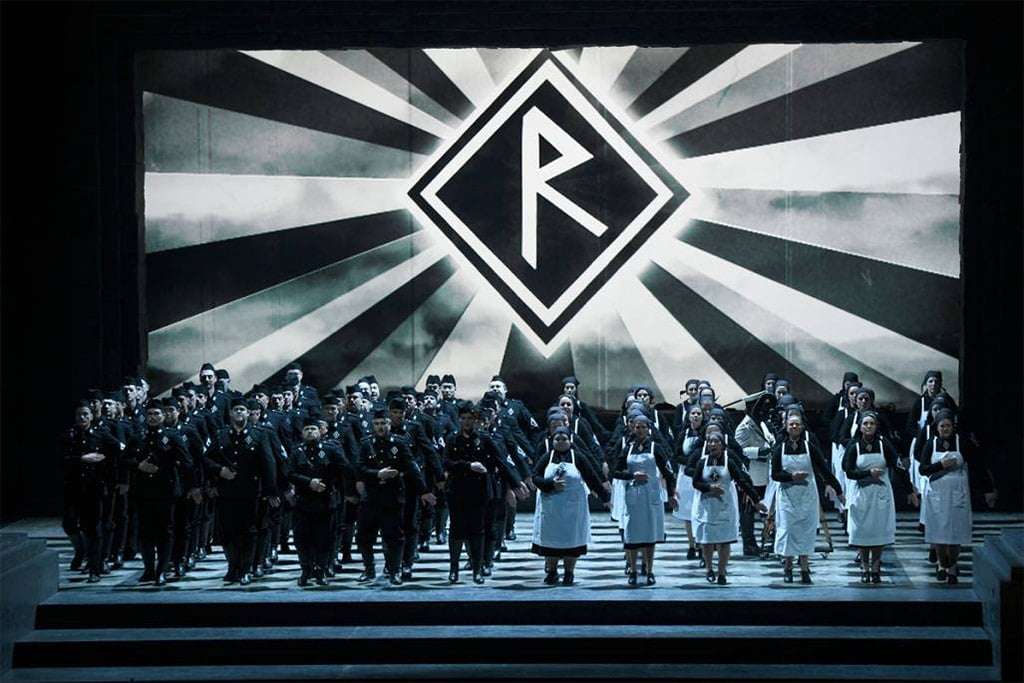 Philipp Stölzl’s production will automatically lose the sympathy of those who would only countenance a ‘normal’ or ‘straight’ realisation. Locating this staging in the Nazi era will doubtless lose the interest of a few more who think that all has been said about that period that can be. His conception is not quite so obvious as that, insofar as Rienzi is not made up as Hitler – although, if Torsten Kerl’s heavily-built, uniformed double (Gernot Frischling) who is seen brooding and then leaping around his study during the Overture, looking out to the Alps, as though from the Berghof in Berchtesgaden, resembles anybody, it is Hermann Goering; there are no “Sieg Heils” from the crowds, and no mass of flags or Swastika signs. But the whole aesthetic is that of 1930s fascism, with its well-drilled crowds like a political rally, banners with “R”, backdrops with sketches for monumental buildings, a replica model of Speer’s plan for a people’s hall (Volkshalle), and Rienzi acts as though he is Hitler, projected on a screen whilst giving public speeches and addressing the people with characteristic wild gesticulations.

The infamous Berlin bunker forms the lower part of the set for the second part of the performance, in which a visibly aged Rienzi hobbles around on a stick, with a jittery right hand, exactly reminiscent of Bruno Ganz’s portrayal in the film Untergang (Downfall) – the same bunker in which, incidentally, Hitler apparently kept with him Wagner’s manuscript score of Rienzi, resulting in its evident destruction. Historical contingencies aside, Stölzl’s production draws a telling and ironic parallel between the ill-fated regimes of Rienzi and Hitler, and in purely dramaturgical terms it is compelling, the choreography on-cue and slick. 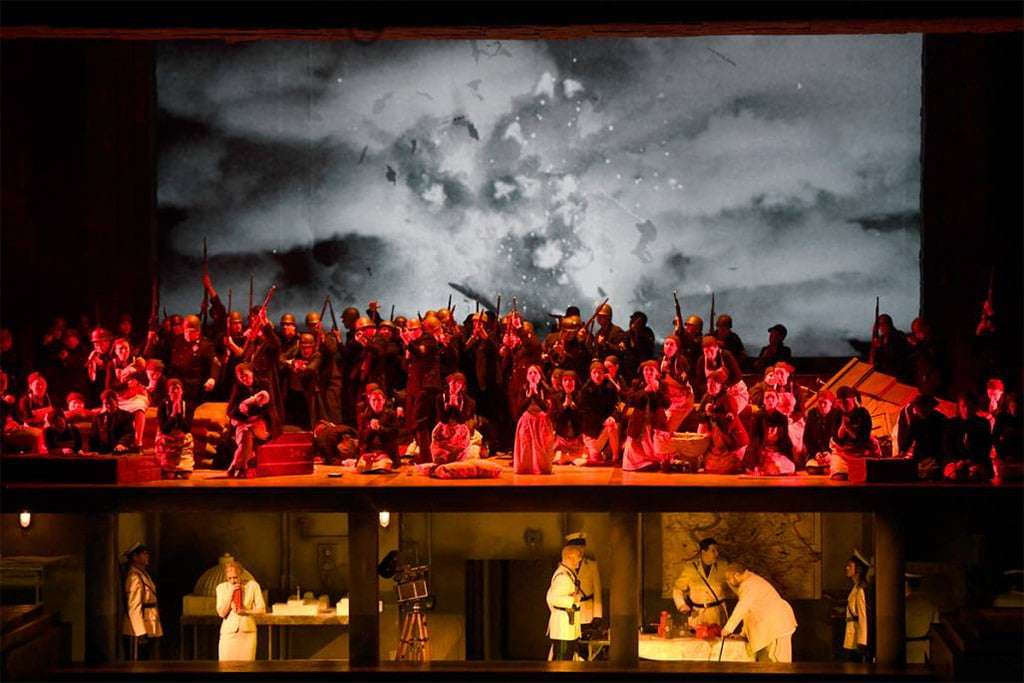 It does less justice to Wagner’s work, however, as quite a lot has had to be cut in order to fit the narrative within that concept, rendering the action confusing as little attention is given to the scheming of Colonna and Orsini against Rienzi. If performed complete, it would be Wagner’s longest score (which is saying something, put alongside Die Meistersinger, Götterdämmerung, and Parsifal) and judicious cuts are probably preferable to make the work intelligible now, but here they are merely wilful.

Musically the performance thrives under Evan Rogister’s conducting; the initial bars of the Overture sound limp, perhaps, but it leads into an account of it and the work at large that is generally measured and solemn. It integrates the score’s stylistic diversity well by handling the transitions in recitative-like or arioso passages with as much tension as the set numbers they link (one can even speak of arias and choruses) so as to make the musical dimension, at least, more compelling than what happens in the staging. In some of the arias Rogister sustains a lucidity with the orchestra which reminds that Wagner had gained experience of conducting, and even re-orchestrating, some of the classics of bel canto such as those by Bellini. 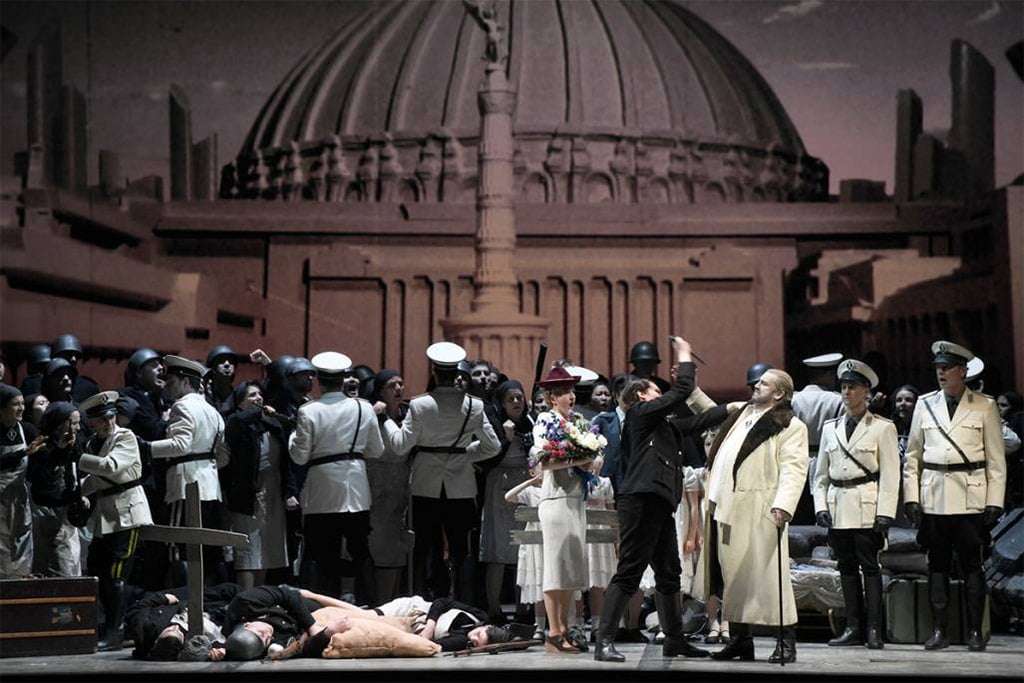 Thorsten Kerl leads the way amongst the singers with a portrayal that tends to carry such lyricism along, rather than achieving a strictly Heldentenor heft, and even if with something of a nasal edge that is not entirely mellifluous he does cultivate earnestness and urgency. Likewise Annika Schlicht sings passionately the trouser-role of Adriano, who struggles through a contradictory course in this drama between his love for Rienzi’s sister, Irene, and loyalty to him, and filial duty to his father, Steffano Colonna, as the latter leads an opposition to Rienzi. As the object of that love interest, Elisabeth Teige’s Irene is notably more tender, until her more vociferous expression of loyalty to her brother at the work’s denouement, even after Adriano’s abandonment – Irene here perhaps fulfilling a similar role to that of Eva Braun, to draw a historical parallel, and possibly presaging a sibling love like that of Siegmund and Sieglinde, if looking for a foreshadow of Wagner’s later oeuvre.

Andrew Harris’s Colonna is rightly dark-voiced, even sinister, like a proto-Hagen, compared with which the Orsini of Dong-Hwan Lee and Cardinal Orvieto of Derek Walton take on a more halting, uncertain character, though their machinations are given rather short shrift in Stölzl’s production which concentrates more on the relations between Rienzi and the public, and the confrontation between public and private duties, more like one of Verdi’s historical operas. Hans von Bülow remarked that Rienzi was Meyerbeer’s greatest opera, but here Wagner is made to look as though he is playing Verdi’s game of furthering the cause of the Italian Risorgimento. 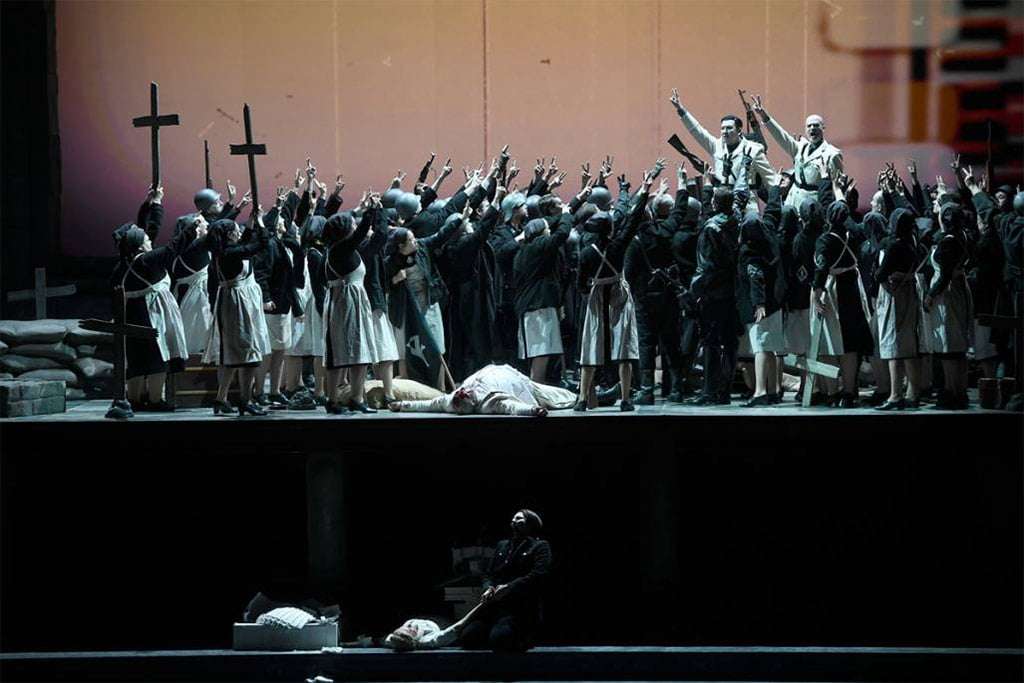 Rienzi is, then, a fascinating musical document, in which one can see Wagner’s many dramatic ideas coalescing, presaging virtually all of his music-dramas to follow (be it the requirement for redemption by romantic love as heralded by Dutchman and Tannhäuser, the need of a populace for charismatic leadership of some kind as explored in Lohengrin, the messiness and shortcomings of political and legal orders as examined in The Ring, and the enlightened individual as in some sense always remaining an outsider from the community, as Hans Sachs in Meistersinger, and Parsifal).

The score reveals a burgeoning symphonic complexity, even if the recurring themes (such as the pregnant opening notes on the trumpet, signalling revolution) are developed with less malleability than his later leitmotif technique, as well as a masterful handling of orchestral colour and stylistic imitation of German Romantic opera, Italian bel canto, and grand French opera with its choruses. Those facets are in evidence here, but not cogently enough melded together to argue the case persuasively for a work that constitutes an important hinge in the history of opera.