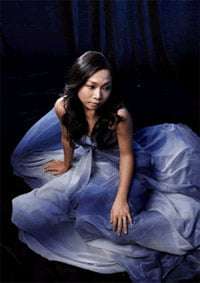 Di Xiao here made her debut at Wigmore Hall. The opening Adagio of Beethoven’s ‘Moonlight’ Sonata presented a convincing flowing tempo, a beautiful soft tone, and subtle dynamic contrasts. The remaining movements were not as ideal or as impressive; the Allegretto (with too long a gap before its commencement) needed a lighter touch; and the rapacious finale required even cleaner playing and less romanticising – once started, this should be a non-stop rollercoaster; and if you’re going to repeat the movement’s first half, you really have to do the same with the second, to even things out. However, Di Xiao did show great presence of mind when she had a memory lapse (during the development) and manufactured some invention not found in the score but which got her back on track very quickly.

Of the two Chinese numbers, both Chinese Moon Songs from 1935, the first one – however charming – was over-elaborate, while the second delighted in its simplicity; both were played with affection and total identification. Like the Beethoven, the Chopin also started well, the limpid opening strummed with much feeling. Yet over the work’s course, for all the unaffected and confident playing, the music’s complex emotional sub-current wasn’t fully evident.

Di Xiao seems to be making something of a specialism of Ravel. On one of two excellent CDs – privately produced but not homespun (details no doubt on her website, link below) – she has recorded three of Ravel’s Miroirs, and recently set down for Somm (due for release halfway through 2012, it seems) is the complete set (plus Sonatine, Le tombeau de Couperin, and Jeux d’eau). In Wigmore Hall only ‘Alborada del gracioso’ didn’t quite come off – too much a straight line rather than zigzagging and not voluble enough (but then the incredible experience of a liquidly crystalline Sviatoslav Richter in even a snippet of this piece – on Bruno Monsaingeon’s film, Richter the Enigma – makes life harder for any pianist when presenting this music). Otherwise Di Xiao was great, really inside one of Ravel’s most original and deep cycles. ‘Noctuelles’ rippled and darted, and ‘Oiseaux tristes’ peered inwards, which this most-interior piece demands. In the most scenic section, ‘Une barque sur l’océan’ (which Ravel orchestrated, as he did Alborada), Di Xiao found oceanic depths and crashing waves; and ‘La vallée des cloches’ gently pealed its ambience and exoticism.

It was then an inherent step to three of Olivier Messiaen’s Huit Préludes (1929), the 20-year-old composer, a descendant of Ravel and more-so Debussy, already having found his distinctive if limited voice, erotic rather than exotic, and over-extending some pretty thin material. Certain details stood out: the gamelan-like tenths of ‘La colombe’ (but Saint-Saëns had pre-empted this effect in his Fifth Piano Concerto) and the ripples and clangour of ‘Un reflet dans le vent’, which seem to be signalling the piece’s end, until it carries on! But no-one could doubt Di Xiao’s commitment to the cause. Encore time: following Messiaen’s machinations how unusually grateful was Sibelius’s atypical Impromptu (the fifth piece of his Opus 5 collection), if with a deep-rooted chorale and translucent soundworld; and another Chinese tune – Shepherd Boy Playing His Little Flute, by He Luting – proved an upbeat and smiling finale. Do try Di Xiao’s CDs; really very good, well recorded, with a range of repertoire (Mozart to Elgar via Nielsen, Grieg and Albéniz) that make for revealing calling cards.