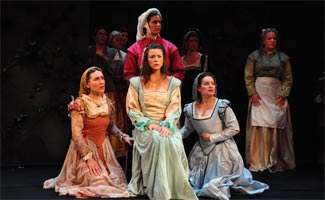 Iolanta, Tchaikovsky’s final opera, was last performed in New York City in 1997, also by Dicapo Opera. The current performances are of a new production. Tchaikovsky intended this 90-minute opera to be paired with The Nutcracker. After the premiere, the critics regarded the opera as the finer of the two works, but it has never shared the ballet’s success. Perhaps this is because of its lightweight, fairy-tale plot in which a fifteenth-century French princess, blind from birth, is kept unaware of her disability by her father, the king, who orders his court to keep the secret. Iolanta discovers the truth from a count who falls in love with her, and this later becomes the key to her miraculous recovery. Despite its implausibility, the storyline seems to work, with everything falling into place, both musically and dramatically.

In this production, John Farrell’s set represents the garden walls by somber-toned panels covered with dark, almost-black roses, with a gloomily lit gate at one side. Near the end of the opera, however, the panels spin around and reflect the blinding light with which lighting-designer Susan Roth bathes the stage – perhaps too obvious a representation of Iolanta’s blindness and recovery. The costumes combine effectual light and melancholic hues and give a traditional feel to the opera. 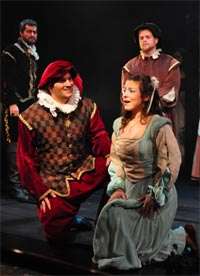 In the title role, Corinne Winters used her shimmering soprano to marvelous effect, singing with uncommon allure, and convincingly portraying the heroine’s blindness and naïveté. Her radiant, resonant instrument was a perfect match to the title role, and her Russian diction was excellent. Winters brought equal measures of hope and despair to Iolanta’s arioso confiding to Marta, her nursemaid, that something was lacking, and she conveyed incredulity and passion in the love-duet with Count Vaudémont. Alex Richardson was an ideal Count, singing with gorgeous tone in the duet and in the ‘romance’ in which he pledges his love for Iolanta.

Seth Mease Carico’s plangent, melodious bass-baritone, with ringing top notes, was especially effective in King René’s aria, in which he prays for his daughter to be cured by the physician, Ibn-Hakia, sung by Brandon Coleman in a wonderfully resonant bass voice. He handled with clarity Tchaikovsky’s tricky modal tonalities, in the aria ‘Two Worlds’, in which the physician advises the king on how Iolanta can be cured. All of the singers with smaller roles contributed to a night of engaging, splendid singing. Among them it was Gustavo Feulien’s admirable baritone, and mezzo Rachel Selan, that most impressed. The chorus was also marvelous, especially when a cure for Iolanta’s blindness seemed near. Pacien Mazzagatti’s conducting showed complete comprehension of the dramatic points of Tchaikovsky’s score while eliciting richly textured, expert playing. In the opening scene, a violin and cello duet was exquisitely performed, and clarinet solos throughout the opera were especially appealing and stimulating. Dicapo has done a great service in making this little-known opera available to the public.