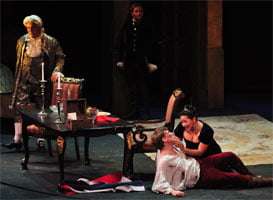 With the premiere of its new production of Tosca, attended by such luminaries as Renata Scotto and Eve Queler, the resourceful Dicapo Opera Theatre triumphantly kicked off its thirtieth anniversary season, preceding the performance with a short film depicting the company’s history. Dicapo’s wonderfully intimate 206-seat theatre gives the audience the unusual sensation of being part of the opera itself, almost as if sharing the stage and orchestra pit with the performers.

The opera’s three best-known arias – Cavaradossi’s ‘Recondita armonia’ and ‘E lucevan le stelle’, and Tosca’s ‘Vissi d’arte’ – were all augustly sung, both singers demonstrating superb timbre, vibrant clarity of sound, and steady voice control. Kristin Sampson’s Tosca was an imposing figure, full of plausible pathos, explosive anger, and unbridled joy. Her commanding stage presence was never more apparent than when Tosca, in a pious moment after murdering Scarpia, places candles around his body and then drops a crucifix onto it. 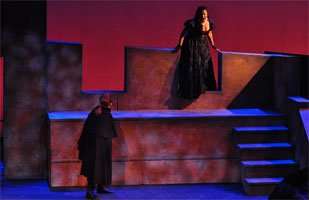 Peter Gage Furlong was equally splendid as Cavaradossi. His effortless singing, especially at the top range of his handsome robust voice, made for good listening. His flippant approach to Tosca’s jealousy in Act One was novel, but he carried it off credibly. Tosca and Cavaradossi’s love duets were all beautifully sung, the attraction between the lovers palpable.

Guido LeBrón was a first-rate Scarpia, his lustrous, expressive baritone rendering his arias with persuasive panache and foreboding iniquity. He conveyed every nuance of the character’s nefarious intentions. Even when the revolving stage unexpectedly jerked a bit during Act Two, causing LeBrón to fall into a chair, he remained in character, the scene proceeding as if the glitch had never occurred.

Of the other singers, Richard Cassell made the Sacristan’s initial entrance memorably delightful, and Brandon Coleman put his pleasing bass voice to good use as Angelotti, lucidly evoking the fugitive’s dread of capture and execution at Scarpia’s hand. The remainder of the cast more than held their own. The chorus and children’s chorus were terrific, richly and vividly rendering the ‘Te Deum’ at the end of Act One.

From the opening three-chord motif associated with Scarpia’s evil, to the concluding orchestral peroration of ‘E lucevan le stelle’, Pacien Mazzagatti kept tempos and dynamics on an even keel, never overwhelming the singers as he led them gracefully through their paces. The orchestral playing was captivating. The traditional staging and costuming were effective, with somber hues and mostly constrained lighting to complete a smooth and splendid production.