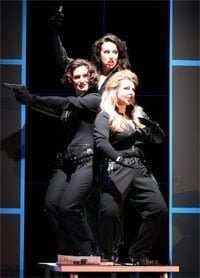 Stephen Barlow’s RAM staging of The Magic Flute refers back to the gormless hedonism of the 1970s with some gusto. It’s a period that might just as well be prehistoric as far as the singers are concerned, but that vigorously vacuous decade still has the power to make older people cringe – especially on the fashion front. There are many US-based cult points of reference – the Three Ladies resurrect Charlie’s Angels; the Three Boys wear the red berets and windcheaters of the Guardian Angels, a vigilante group formed to patrol crime in New York; the opening takes place in Studio 54, a groovy nightclub once the acme of cool; the Queen of the Night is the Gorgon-like editor of a style mag called Nightlife; and the temple of enlightenment has been taken over by Scientologists, an organisation said to be notoriously sensitive to criticism, led by the L . Ron Hubbard-like Sarastro. The all-important Magic Flute is a cassette played on one of those hideous ghetto-blasters.

However far removed from the land of Isis and Osiris, most stagings of Magic Flute manage to retrieve some sense of morality and spiritual growth from Mozart’s heady mix of pantomime, conversation and opera seria. Barlow’s staging, though, sustains an exclusively high level of light-hearted, cynical send-up, with Tamino and Pamina’s trial involving their walking fully clothed into and out of a sauna (another, usually decidedly non-purifying, gift of the 1970s) and their being married into Sarastro’s cult, presented as far from benign or enlightened. It’s a gleeful concept, but its cynicism is so complete that all else is eclipsed. Still, Mozart proposes; Barlow disposes. 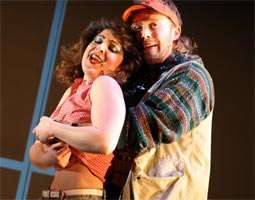 And Barlow’s view had at its disposal some of the consistently best singing I’ve heard from the RAM Opera Course. I wasn’t convinced that Rupert Charlesworth’s preppy, unworldly Tamino might have been predisposed to linger longer in the sauna of experience, but he looked personable enough and sang beautifully, a tenor with an attractive hint of baritone weight and a graceful higher register – he made his mark with a seraphic ‘Dies Bildnis’ and just got better. 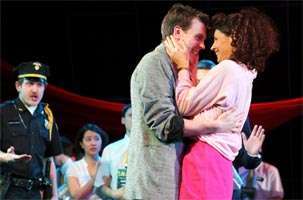 His Pamina was Aoife Miskelly (a terrific Despina in RAM’s staging of Così fan tutte last year), a fine Mozart singer, whose presence hinted at areas of Flute denied by Barlow, and who sang a painfully luminous ‘Ich fuhl’. Johnny Herford’s show-stealing Papageno (cast as a paparazzo) was impressively sung and acted with a sharp sense of comedy. The first of Ruth Jenkins’s Queen of the Night arias sounded slightly cautious, but ‘Holle Rache’ was very fine, with crisply articulated, pin-point accurate coloratura and easy control of fluid decorations. The direction and design could have made her more of a malevolent presence, but she was in the right area of loopy hysteria. Her three ladies struck Charlie’s Angels-type poses to the manner born and were a great ensemble, as were the three boys, although the sight of them grooving half-heartedly to their Magic Flute ghetto-blaster during the Overture didn’t work. Frederick Long’s creepy, oleaginous Sarastro was a wonderful realisation; Monostatos was portrayed as a Village People reject by Samuel Furness as a (fully-clothed) hen-night-style New York cop and seductively sung. Nathalie Chalkley’s Papagena eventually turned out to be a siren in hot pants, delivering a sweet duet with Papageno. Adam Marsden’s Speaker was memorably camp.

The choruses were thoroughly well directed and sung with an almost baroque intensity. The RAM Sinfonia’s playing warmed up after a slightly scratchy Overture. The German dialogue flowed freely and idiomatically.