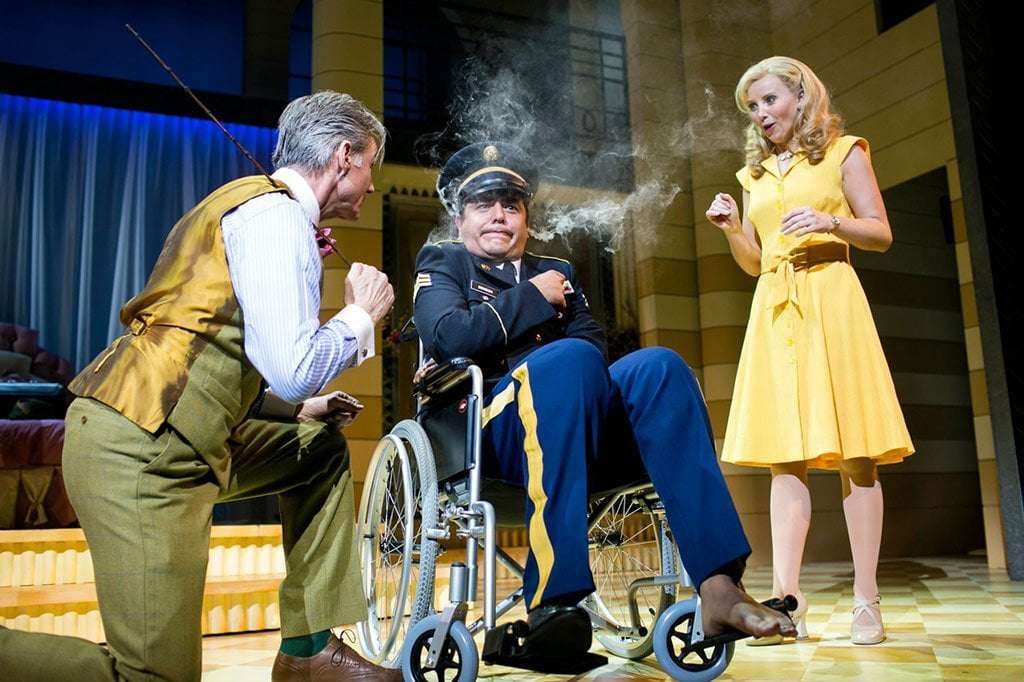 In a seemingly never-ending race to bring new productions to Theatre-land, producers have turned their attention to popular films – with mixed results. Dirty Rotten Scoundrels is based upon the Michael Caine and Steve Martin film. Set in the French Riviera, the story is about two conmen – Lawrence and Freddy – and their efforts to swindle wealthy women.

The 1988 film, itself based on Bedside Story with David Niven and Marlon Brando, has been followed closely but with a couple of sub-plots – the romance between André, Lawrence’s right-hand man, and Muriel for instance – added along the way. David Yazbek says “we took what we needed and changed what we wanted.”

Yazbek’s score, though derivative, is none the worse for it and doesn’t take itself too seriously. ‘Nothing is too wonderful to be true’ is a 1980s’ power-ballad in everything but name which Noel Sullivan and Carley Stenson (perhaps better known as Steph Cunningham in Hollyoaks) understand – enjoying the song’s parody with some cracking singing along the way.

The comedy moments are rib-tickling good. Mark Benton’s comic ability is well-known and he puts it to good effect. The relationship that his character (André) builds with wealthy Muriel is masterful. Michael Praed oozes suave sophistication and elegance – more like Niven than Caine. Noel Sullivan as the wide-boy Freddy captures the essence of Steve Martin’s portrayal and adds to it – superb.

Dance routines are added for the UK production. Some are energetic while others take on a slower ballroom-swing – a form that gives Benton another chance to practice the steps he learned while on Strictly Come Dancing in 2013.

The band consisted of two keyboard players (Ben Van Tienen directed from the piano), bass, percussion, reeds and brass – all of which, at the start, was amplified to such an extent as to blur the individual sounds and drown the singers who were also amplified. Someone found the volume control and a more reasonable balance ensued.

Dirty Rotten Scoundrels is unlikely to attain longevity but it does offer a couple of hours of family fun (though there are a couple of expletives in one of the songs, so be warned if you are easily offended). The lyrics are inventive and the tunes enjoyable though you would be hard pressed to call them memorable, but the show has an excellent cast and put a smile on your face.