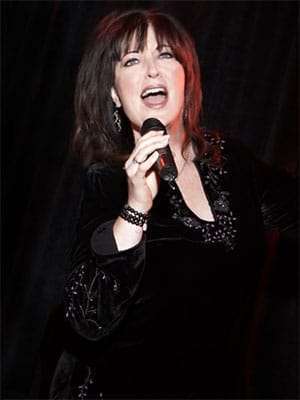 Ann Hampton Callaway is noted for her ceaseless promotion of the golden age of popular song, having grown up in a home where music was foremost – her father was a famous broadcaster and journalist, and her mother was a singer, pianist and vocal coach. “I thought every girl’s father sang scat and every mother sang torch songs.” As well as interpreting songs of yesteryear, she is the only composer to collaborate with Cole Porter (she provided the melody for an unpublished set of lyrics), and her songs have been embraced by Liza Minnelli, Patti LuPone and Barbra Streisand. Her numbers for the latter include ‘I’ve dreamed of you’, the ballad that she sang to James Brolin at their wedding.

It is thirteen years since Callaway was last in London (she performed a double-act with her sister Liz, entitled Sibling Revelry) and now she is back. She says of her sister that, when they were growing up, Liz favoured the chirpier numbers while Ann herself was drawn to emotional material, and her programme, saluting the great divas from Ella Fitzgerald and Billie Holiday to Carole King and Joni Mitchell, allows her to run a gamut of moods and styles. Her middle register reminds of Annie Ross, but her voice has much more power and is capable of blasting the rafters.

‘How high the moon’ includes her own lyrics for part of the scatting section, and demonstrates a keen aptitude for impersonation, not least for Holiday in a segment of ‘God bless the child’ and is uncannily accurate, even though “This is when she was on drugs.” The sober Holiday is celebrated Callaway-style with a bouncy ‘All of me’. She also gives us a few bars of ‘Misty’ in Sarah Vaughan mode before sliding into her own distinctive styling for ‘Tenderly’. Cleo Laine is honoured by a strutting ‘Ain’t misbehavin’’, with stride piano, prior to a highlight, a heartfelt rendition of the lovely ’La vie en rose’, for which Callaway provides a verse. I think Piaf would have approved, and we were then coaxed into joining Callaway in a lively chorus of ‘Milord’.

In contrast Callaway’s tender ’The folks who live on the hill’ is a beautiful tribute to Peggy Lee. With such a warm rapport with the packed room Callaway then had us singing again, Carole King’s ‘You’ve got a friend’, followed by Mitchell’s ’A case of you’, which inspired Callaway to become professional. It was a surprise to hear the great Harry Warren & Mack Gordon standard ‘At last’. Callaway’s soul-styled belting transformed the number into something very different to the version by Glenn Miller, who introduced the song in the film Orchestra Wives (1942).

Callaway then did something unusual and daring – she asked us to help her write a song, then solicited names, places and incidents to make up an instant ballad, which she performed to a rousing reception. Inevitably, Streisand was the next singer to be welcomed. Callaway was undecided how to present ‘People’ until Sondheim suggested she merge it with his number from Company, ‘Being alive’. The combination benefited both. For an encore Callaway introduced Judy Garland with a moving a cappella rendition of ‘Over the rainbow’ and proved a moving climax to a rich and varied show.