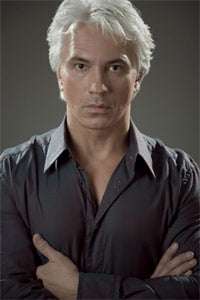 When Dmitri Hvorostovsky gave a recital of Russian song at the Barbican Hall in October 2008 I found him under-powered for the size of the auditorium and outgunned by his accompanist Yevgeny Kissin in volume and even in musical personality. On this occasion both venue and judicious accompanist Ivari Ilja were properly matched to the singer and the frustration of that concert was replaced by fulfilment, full justice given to the songs both verbally and tonally. How much larger Hvorostovsky’s voice seemed in this hall and how much greater his confidence in using it to apply his interpretative ideas. Here he was entirely at home. We could have been back at St David’s Hall, Cardiff in summer 1989 when he burst onto the vocal scene. He entered the platform with something of the confident gladiatorial manner he had adopted all those years ago. For the adoring audience time seemed to have stood still. And vocally it had: Without any need to force the voice came through without blemish.

From the opening song we were reminded of his ability to mesmerise. In Tchaikovsky’s “Again, as before, I am alone” he uttered the repeated opening phrases in a semi-paralysed mezzo-forte. There followed a build-up of passion through the ever-rising phrases and an accompanying crescendo which revealed the voice at its most resplendent. But it was not just the instrument which impressed in the singer’s performance but his structural appreciation and the ability to shape the argument of a song. In this and even more so in the less commonly heard “The heroic deed” the ringing peak of the song came as the measured climax inherent in the poet’s words.

The pairing of these two composers was based on the overlap in time of their respective vocal writing: Tchaikovsky attended rehearsals of Rachmaninov’s early one-act opera “Aleko” in the year of his last collection of songs (and his death). There is a danger when programming their works for voice and piano that Tchaikovsky’s style will seem a sort of superficial perfumed lyricism compared to the asperity of Rachmaninov, the accompaniments invented by the virtuoso pianist much more stimulating than those of the symphonic composer.

Hvorostovsky could almost have set out to state the case against the critical suspicion of Tchaikovsky’s song-writing, the belief that he is better at creating a general mood than a detailed response to the poetic text. “Don Juan’s Serenade” lacked nothing in macho display, the tone hard and the references to conquest in love unashamedly tied to weapons and blood, but the treatment of the contrasted section after each verse gave more than a hint of first the softness of romantic love, then finally surrender to the woman he was serenading, Hvorostovsky may have been in command vocally but the character was not.

In Rachmaninov’s songs the interest is unarguably more evenly distributed between voice and piano. This is not a question of the vocal line being short-changed or of the piano part being awarded a role independent of the voice. In his best songs they enrich each other. In “As fair as day in blaze of noon”, the piano figurations, particularly the rocking ones, balanced the melismas in the latter lines of the vocal part. The singer finished this song with a perfectly executed messa di voce. “Do not sing for me, fair maiden” found the singer in complete harmony with Ilja. The baritone’s initial appeal was stronger than one normally hears, its repetition at the conclusion noticeably softer, while the prelude and postlude were played as hauntingly as I can ever remember.

Hvorostovsky’s approach was consistently theatrical. The songs were milked for their emotional potential and in the 545-seat Wigmore Hall the singer possessed sufficient vocal energy to release the excitement, pathos, despair and other visceral feelings present in both words and music. Not all native speakers even articulate the Russian language with the precision and relish with which he treated all these poetic settings. This came out with particular effect in Rachmaninov’s “When yesterday we met”, the setting more recitation than cantabile.

This text-led approach was immediately contrasted in the next song, “In the silence of the secret night” by a performance which seemed to be sustained on a single continuous line, the final note drawn out to masterly length. The early-twentieth-century songs from the post-interval group which surrounded this familiar romance showed other features of the composer’s progressive style, the influence of Mussorgsky in the Musset excerpt “Loneliness” very redolent of the “Songs and Dances of Death” with its atmosphere of foreboding and haunted visitation.

There was more refinement in this group, with Hvorostovsky taking every opportunity for subtle colourations of tone. Ilja brought out Rachmaninov’s skill in writing accompaniments which are pianistically rewarding but which allow the singer’s sound and words to be heard. The balance of singer and pianist at the climax of the final song, “Christ is risen”, was a fine example. The encores came from the same composers and included a particularly elegant account of Tchaikovsky’s “Serenade”.

It is unfortunate that Hvorostovsky’s career continues after more than two decades to be defined in terms of his contest with Bryn Terfel in that renewal of Cardiff Singer of the World. The Welsh baritone has proved to have the larger voice and consequently to have developed a portfolio of heavier roles, notably in the Heldenbariton Fach. Hvorostovsky has struggled to keep up, his operatic repertoire limited, attempts to enlarge it meeting with a mixed reception. This was his field of action. The recital (dedicated to the recently-deceased mezzo Irina Arkhipova, who gave a recital at Wigmore Hall at the age of 69) was an unqualified success.