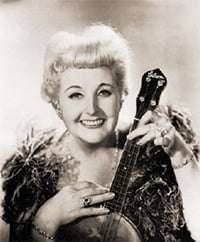 For over thirty years Tessie O’Shea was one of the greatest of music-hall performers. In the heyday of the London Palladium O’Shea and Gracie Fields were the only British women to top the bill. The talented countertenor Dominic Mattos, last seen at The Pheasantry paying tribute to Ethel Merman, describes himself as a “music-hall obsessive”. He has fashioned an affectionate tribute to Tessie in her centenary year. Along with her ebullient trademark numbers, Mattos provides interesting facts about her life along with some less expected ditties that she introduced, notably ‘I left my heart in San Francisco’, which she was singing twenty years before Tony Bennett thanks to meeting George Cory and Douglas Cross in a Greenwich Village bar in 1954 and they gave her the song. She achieved further fame in 1963 when she won a Tony award for her Broadway appearances in a role written for her by Noël Coward in his musical, The Girl Who Came to Supper, from which Dominic Mattos chooses the affectionate ’London is a little bit of all right’. 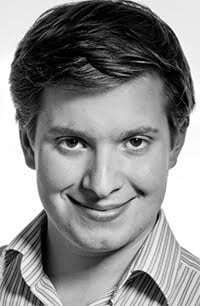 Unlike his Merman show, which was performed in drag, Mattos does most of this show in male attire apart from some outlandish wigs, though it is somewhat startling when the young man first bursts into song as a soaring soprano. He opens with a rarity, a lively number written specially for O’Shea in 1937, ‘I’m Two Ton Tessie from Tennessee’, which Mattos sourced from the estate of one of its creators, Lou Handman. It is one of several unfamiliar gems that Mattos has found in archives or through the domains of those who worked with Tessie. One of the prime influences on the young O’Shea was an earlier music-hall headliner, Lily Morris. Mattos gives an appropriately bawdy rendition (wearing a wig of red curlers) of Morris’s best-known song, ‘Don’t have any more, Missus Moore’.

The biggest influence was Sophie Tucker. Mattos manages a superb imitation of her singing ‘Nobody loves a fat girl’, telling us “that’s the deepest I’ll ever sing.” Another rarity, ‘You’re at Blackpool, by the sea’ and a touching ‘Wish me good luck, kiss me goodbye’ precede some standards O’Shea popularised, including Frank Loesser’s ‘Slow boat to China’ and the 1946 hit by Sammy Cahn and Jule Styne, ‘Five minutes more’. There are though two elements missing from Mattos’s tribute – O’Shea had ferocious energy and her high-kicking choreography was an indelible part of her act, and she had one indispensable prop – a banjolele, which she strummed vigorously to accompany her cheeky songs. But Mattos, not attempting an impersonation, bluntly tells us he bought the instrument, but couldn’t master it. Instead he gives audience members paper bags which we are asked to strum while he sings ‘I’m looking over a four-leaf clover’. There is a lot of audience participation, and it is a mark of Mattos’s command that those of us who shudder at the very phrase found ourselves happily joining in. Further numbers in a shrewdly varied selection include ‘Nobody loves a fairy when she’s forty’, ‘A little on the lonely side’ and ‘Young at heart’, the last an apt description of Tessie, who was performing almost until her death at the age of 82. She doubtless would have revelled in this loving and vastly enjoyable tribute.