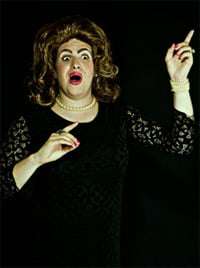 The last few years have seen the emergence of a new cabaret star in Dominic Mattos. A former theology graduate, he has a day job in publishing, but is also an actor, voice-over artist and freelance writer. And he does what he calls a one-man sitdown comedy act. His main claim to fame in London, Aldeburgh, Edinburgh and elsewhere has been his performance as Ethel Merman. Blessed with a countertenor voice he is able to belt out the songs made famous by that legendary superstar of Broadway. Add-in a big hair-do and a florid dress, and the vision is complete – it is the nearest you will get to seeing and hearing the late, great real thing.

Mattos does a straight (as opposed to camp) tribute to this legendary lady of song whom, generally speaking, always sang the best numbers from the Great American Songbook, most of which were written for her by the likes of Cole Porter, Irving Berlin, Jule Styne, Stephen Sondheim and George & Ira Gershwin. In Merman guise he tells of the first time Ethel met George Gershwin – he offered to change anything in a song if she, Merman, did not like it. Mattos devotes one-third of his current set to Merman material, the main part of which is her famous medley of the songs she sang in the parts she played which, she says: “were cast in a similar mould”. She was always the bold and brassy heroine of such shows as “Annie Get Your Gun”, “Girl Crazy”, “Panama Hattie”, “Anything Goes”, “Red, Hot and Blue” and “Gypsy”. 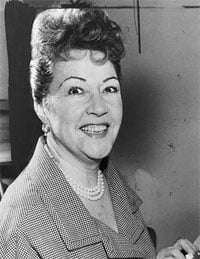 This medley spills out hit after hit, such as ‘Doin’ what comes natur’lly’, ‘The hostess with the mostes’ on the ball’, ‘Life is just a bowl of cherries’, ‘You’re an old smoothie’, ‘Let’s be buddies’, ‘De-lovely’, ‘Small world’ and ‘Everything’s coming up roses’. Merman may not have always worked on the film versions of her stage shows, but she was there in the beginning and she sang the songs first. Sometimes she was also there last, such as with “Hello, Dolly!”, which Jerry Herman initially wrote for her but she was too tired after touring to take on another Broadway engagement. However, later on she did play Dolly Levi, singing two extra numbers that Herman had written for her, and went on to close the show in its final run, something that Ethel insisted upon – she never left a show unless it was closing.

Mattos gives a perfect presentation as Merman – it is not a slavish imitation but more an impression of the great lady, touched with humility, grace, pride and not a little humour. He gets the sound, the look, the waving arms and the abiding talent to a T in his tribute and it provides a timely reminder that we really do not have stars of Merman’s magnitude any more.

Set II is called “Comedy”, even though it opens with ‘As if we never said goodbye’ from Andrew Lloyd Webber’s musical version of “Sunset Boulevard”. Dominic arrives in the long gown and head-dress so beloved of Gloria Swanson as Norma Desmond. This set of songs is described as: “looking at forgotten, misunderstood or undiscovered gems and songs with a story”. This takes in ‘It’s oh so quiet’, once a hit for Betty Hutton and latterly for Björk and then the comedy comes roaring out with ‘Why do the wrong people travel?’ from Noel Coward’s “Sail Away”, then silliness is personified in ‘When it’s night-time in Italy, it’s Wednesday over here’, while the late Tessie O’Shea is evoked in ‘Two ton Tessie from Tennessee’, followed by ‘Where in the world is my prince?’ from Herman’s unproduced show “Miss Spectacular”, and ‘As we stumble along’ from “The Drowsy Chaperone” – an eclectic collection, all sung in Mattos’s signature, high register. This Set ends with a magnificent rendering of ‘Climb ev’ry mountain’, for which he hits those top notes with utter aplomb and seemingly total but effortless abandon, so that the combined forces of Constance Shacklock and Lesley Garrett could not better the interpretation.

The Third Set (“End of the Evening”) is, as Mattos explains, “an experiment to see whether it works to juxtapose my higher voice with a quieter style, in my own clothes.” His piano accompanist, the excellent Kaffy Rice-Oxley, also tries a spot of cross-dressing between sets. For his final section he chooses some Berlin and Porter, Irving Gordon’s ‘Unforgettable’, a signature hit for Nat “King” Cole, Sammy Fain and Lew Brown’s ‘That old feeling’, and a terrific quartet of Jule Styne songs, with lyrics by Comden & Green. Coming right up to date he sings ‘If I ever say I’m over you’ by John Bucchino, but for an encore it is back to ‘You go to my head’, first recorded by Teddy Wilson in 1938 – and by everybody else since, most notably Judy Garland in her Carnegie Hall concert. It is a brilliant finish.

Mattos has a terrific voice, albeit unusual, which he puts to good effect in whatever he sings. His repertoire is extensive and includes material not usually heard. An evening in his company is such a pleasant experience. Look out for him when he comes your way.