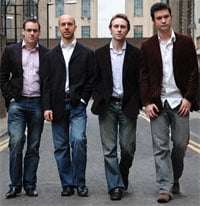 Beethoven’s ‘Harp’ Quartet, so-called because of the pizzicatos in the first movement, occasionally suffers for its stand-alone position in the composer’s output, coming as it does between the three ‘Razumovsky’ quartets and the celebrated late works.

The Doric Quartet gave a performance of vivacity and charm, successfully uniting the classical approach of the genial first movement and the hurrying, frenetic scherzo. Alex Redington enjoyed both the exuberance of the first movement and the soft restraint of the slow one, successfully juxtapositing the major- and minor-key sections – the former given with quiet lyrical charm, the musicians using less vibrato when the harmony turns sour, emphasising links with polyphonic chant.

Only in the scherzo was there a shortfall of projection, for while the introduction was busy and well defined the slightly manic violin idea that follows was too introverted. The musicians made an effective transition from this to the finale, where close attention to dynamics and phrasing ensured the Theme and each of the Variations were nicely articulated.

A fiery performance of Janáček’s Second String Quartet followed, inspired, like so much of his later works, by Kamila Stöslová. It was an interpretation of vivid contrasts, making the most of dynamic extremes, and particularly sensitive in the use of silence, so important when punctuating the work’s frenzied outbursts.

The range of colours achieved by the Doric Quartet was most impressive, from the quasi-orchestral sonorities experienced at the finale’s climactic point to the detailed sul ponticello writing. Simon Tandree made the most of the viola’s elevated role – it takes on the expression of the composer’s desire – whilst all the instrumentalists were well-drilled.

Some extraneous audience-noise disturbed a rapt closing page in the second movement and the sheer energy of Janáček’s more exuberant writing jumped off the page in the big, sweeping melodies of the opening and the stolid folk-theme with which the finale starts.

The Doric Quartet achieved a most satisfying (lunchtime) programme, notable for interpretations given with impressive unanimity