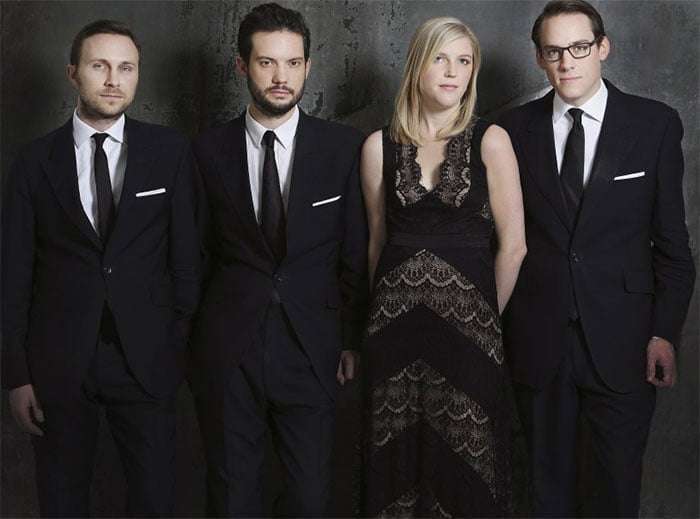 To programme six of Haydn’s very greatest String Quartets over two days was an adventurous and exciting project which was rewarded by almost a full Wigmore Hall each night. In his perceptively written notes Misha Donat gave anticipations of what we were to hear. He pointed out that in the opening movement of the ‘Emperor’ Quartet, Haydn’s putting the coda at a faster tempo is effective only if the second repeat is made – and sure enough this was so in the Doric Quartet’s performance. Less convincing was the apologia for the Minuet of Opus 76/1 when the writer said that the scoring of the trio “…suggests that it needs to be played at a slower tempo …”. Sadly the true reason for relaxation of speed at this point is that the Presto Minuet is frequently taken too fast leaving it impossible to obey Haydn’s score which indicates no tempo change. Fears were realised because the Minuet raced frantically (and for a few moments untidily) so that the poor Trio did not stand a chance – it was performed much slower but with so much expression that no basic tempo was definable; added to that, the first but not the second repeat was made after the Trio.

All this suggests that shape, form and contour are not important factors in the Doric approach to Haydn. However there were many other elements which caught the attention – often challengingly so. One characteristic of the playing was especially interesting, an individual’s freedom of phrase. This was obvious from the start of Quartet No.1 when the cellist gave a ‘lift’ to the initial theme yet, when echoing the phrase, the violist played it ‘straight’ and this difference was evident at every recurrence of the pattern. Similarly the cellist’s exaggerated weight near the end of the movement was surely his own idea and it gave a delightful peasant-like drone-bass which I had never been aware of before. The slow movement highlighted a typical Doric effect in that reflective moments were played with the utmost quietness – the repeated sequences of notes from bar 25 and again from bars 61 and 83 were at the brink of audibility, to great effect. The Finale was also very free but with the danger that quiet means slower and loud means faster.

Quartet No.2 was more balanced in approach although in the opening movement there was always the tendency to move forward whenever Haydn was loud and cheerful. The Andante più tosto allegretto never came near to its allegretto option and in the Minuet the Trio though not basically slower varied enormously in pace and the powerful moments were heralded by a dragging emphasis which served merely to overstate a dramatic point that Haydn had already made perfectly clear. In the Finale the essence of Haydn was captured, especially when at bar 8 there are fermatas on each of the first two notes inviting the first-violinist to slide from one to the other. Alex Redington did so delightfully, recalling the great Alexander Schneider at this point but more than that, Redington also used portamento in the bars both preceding and following that moment on each of its appearances.

The ‘Emperor’ Quartet was a little more stable in terms of tempo although predictably the ‘bagpipe’ effect in the lower strings (from bar 65 onwards) was massively exaggerated and a slower tempo imposed. Then came the great ‘Emperor’s Hymn’ which is incorporated into the variation movement marked Poco adagio – cantabile. We have heard this melody hundreds of times but great music can never seem hackneyed and this performance was the most beautiful, indeed the most moving that I have ever heard. This was superb musicianship and was rewarded at the end by a long stretch of silence. The Minuet was not perfectly steady but solid enough although again the Trio was over-expressive. The Finale went at speed and worked well but with predictable lingering at thoughtful moments: within a reading favouring freedom of tempo it made interpretational sense.

This ended the first concert but there was an encore, a beautiful performance of the slow movement of Opus 76/4.

The second evening opened with a very subjective reading of that whole work, entitled (not by Haydn) ‘Sunrise’ – for very good reason since the gracious rising idea with which it commences can reasonably be thought to conjure up such a visual image. The Doric members encouraged this romantic notion, I do not recall the theme ever having been played this slowly and great loveliness was achieved. Perhaps the subtitle need not be dwelt upon because soon the sun fairly hurtled across the sky. The beginning therefore sounded like a slow introduction but because the passage (or its inversion) returns several times, the movement constantly changed tempo (Haydn’s requirement is simply Allegro con spirito). Despite becoming more a fantasia the result gave an alternative view of the music. There followed the Adagio, played with the same sensitivity as before. Coming to the Minuet, there is the comfort that its final note leads firmly into the Trio so there could be no risk of tempo variation here. True the speed was relaxed at the very end of the section but the unusual decision to accelerate back to tempo through the first bar of the Minuet’s repeat was surprisingly effective. Later there came the fermata before the final summing up; it was given a gigantic slow-down and huge emphasis (even the players smiled when applying it). A surprise certainly but a delightful effect and I wondered what would happen when the section was repeated but, despite a post-Trio first repeat, there was no second one. The marking Allegro non troppo for the Finale was respected and breadth did not mean any lack of liveliness in this cheerful reading.

The form of the opening movement of Opus 76/5 is unusual, starting Allegretto but at bar 76 switching to Allegro and this suited the Doric’s tendency to stress contrasts of tempo and helped further to underline the depth of the following Cantabile e mesto – a most sensitive interpretation – the subsequent silence in the Hall enhanced the rapt mood. The Minuet has a charming Trio featuring a rumbling grandfatherly theme on cello – the approach was to break up the melodic line into individual phrases – a little eccentric but it worked. The Presto Finale was taken very swiftly indeed and incorporated both brilliance and accuracy.

Opus 76/6 found the Doric musicians again being less ‘personal’ in their approach, the one exception being the phrasing of the opening variation movement. It is reasonable for the first two bars of the theme to be followed by a softening of tone in the similar next two – but also to make this echo effect slower was unsettling. Nevertheless, this proved to be a passing whim. The unexpected later outbreak of a Bach-like fugue was played with extraordinary precision. The Adagio – marked ‘Fantasia’ – was aptly suited to these musicians and their very quiet playing was spellbinding – Haydn at his greatest. Preceded by a Presto Minuet the central section is marked ‘Alternativo’ rather than Trio and consists of a repeated downward scale followed by an upward reversal. Here the musicians split the phrases and ended in a hush. The Finale featured virtuosity – far faster than usual but every detail remained clear.

The encore was ideal – the Adagio from Haydn’s Quartet Opus 1/1, here presented with gentility, sensitivity and ideally elegant tone, the movement sounded as mature as those we had heard composed a generation later.