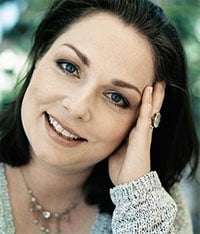 For once in the Wigmore Hall’s Song Recital Series, the voice was the thing. Dorothea Röschmann has an instrument of creamy consistency but without the blandness that can be associated with that epithet. It is solidly resonant in the chest register but not hard, and exciting around and above the top of the stave without slipping into stridency. The middle of the voice is sensuous and could be enjoyed as sheer sound, though Röschmann does nothing to encourage such superficiality: words are kept admirably in balance with sound and tone, and colour and sonority are always the servants of interpretation. At the same time the latter does not draw attention to itself.

Röschmann’s operatic repertoire has been that of a light lyric soprano and predominantly a Mozartean. Now, in the current season, she is undertaking the Marschallin and Elsa, suggesting that the voice is gaining in strength. Her policy of covering her top register promises vocal security and career longevity.

Schumann’s ‘Mary Stuart’ cycle was relatively low-key and speeds were generally brisk but the whole was carefully shaped as an arch of emotion. In the initial farewell to France the singer’s mezzo-ish timbre suggested a mature women, while her use of rubato confirmed the pathos of her situation. The poem written after the birth of her son had a flavour of subdued realism: one felt that her plea for his future was hoping against hope. The central climax came in her letter to Elizabeth, the belief in its effectiveness undermined by doubts, her agitation reflected in the turbulent continuity of the music and encouraged not to settle by Graham Johnson’s dotted phrases. After reaching a climax at the heartfelt metaphor of the ship struggling against a nocturnal storm, she sank into arid despair. With all hope now gone, ‘Abschied von der Welt’ was interpreted as abject acceptance of fate, as a noble settlement with enemies and supporters, personal and political. Röschmann, her eyes closed, as she was wont to do at moments of emotional intensity during this evening, with only falling elegiac phrases among the simple chords of her accompanist, needed nothing more explicit than the warmth of her tone to convey the predicament of the doomed queen. The ending poignantly reflected her insecurity: “Frieden!” was a cry of desperate desire. Then, in the final prayer, Röschmann allowed us to glimpse the fear beneath the courage traditionally attributed to Mary as she faced death.

The teamwork of the two musicians was central to the success of the Wolf group. In ‘Nimmersate Liebe’ the wit of the song was clinched by the pianist’s final notes; in ‘Erstes Liebeslied eines Mädchens’ it was the insistence of the accompaniment which induced panic in the girl and in ‘Begegnung’ the wind swirling in and out of focus was vividly depicted by Johnson’s account of the piano part. Wolf left it up to the performers to choose the order of the songs. Here flippancy and intensity were both represented, as were subjectivity and detachment, the mundane and the philosophical. Richard Stokes, in his programme note, made great play of the bawdiness within the ‘Mörike Songbook’, the obscene quibbles often referring to the reproductive organs, sometimes very close to the surface of the poetry and clearly recognised as such by the composer. A plumpish figure, Röschmann fitted most naturally into the schoolmarm-like role posited by the opening of ‘Nimmersatte Liebe’ but a twinkle entered her eye when sexual innuendo reached the agenda!

The two deeply nostalgic songs received the full organic treatment. Never was the thread lost in ‘An eine Äolsharfe’ while the focus switched from the piano’s tinkling crystalline high register through the singer’s emotional overflow to the long postlude. ‘Im Frühling’ was beautifully shaped, with sweeping phrases, spotlighting of individual words, propulsion and relaxation of momentum all culminating in a suitably bardic delivery of the key final words “Alte, unnennbare Tage”.

In the “Des Knaben Wunderhorn” songs Röschmann broadened her characterisation of the artless rustic figures that make-up this basic, metaphor-free oral verse. She turned her top notes brash, her chest notes crude for ‘Rheinlegendchen’, was as uproarious as any animal imitator in ‘Lob des hohen Verstandes’ and suggested a skilled radio actor adapting his or her voice for the dialogue of the warring characters in ‘Verlorne Müh’. The runs of ‘Wer hat dies Liedlein erdacht?’ were executed with military precision. Amidst all this boisterousness both artists achieved something close to sublimity with ‘Wo die schönen Trompeten blasen’; dream intertwined with reality in this deeply ironic narrative. Röschmann’s richly romantic tone-colour suited perfectly the ghostly soldier’s plea to be admitted and share the warmth of his lover’s arms, while Johnson’s meticulous articulation of the instrumental figures, distant and overlapping, astonishingly effective in mimicking the orchestra, spread a layer of foreboding which ultimately came to dominate. This was truly haunting.

The recital’s title implied at least equal status for Brahms with the other composers. In fact, his ‘Gypsy Songs’ were more of a fun way to end the recital than a peak of its musical quality; demanding though they may be for singer and pianist, these are rather hollow pieces. Röschmann exhibited real charm in ‘Wisst ihr, wenn mein Kindchen’ and uninhibited spirit in ‘Rote Abendwolken ziehn’. Her chest register was particularly well-suited to the tessitura of some of these songs, while the voice opened out beautifully in the czardas section of ‘Brauner Bursche führt zum Tanze’. The most worthwhile of the songs was ‘Kommt die manchmal in den Sinn’, where rather than impersonating an artificial character she could give sincere expression to feelings.

By contrast the encores restored a level of profundity that the Brahms had forsaken: Schubert’s fourth and most arid version of Mignon’s “Nur wer die Sehnsucht kennt” (D877), Wolf’s ‘In der Frühe’ (from “Mörike-Lieder”) and the rarely-performed ‘Selbstgefühl’ (Mahler); both artists revelled in the mordent wit of the latter.

This was not a recital that made the heartbeat race: Röschmann did not plumb the depths of Wolf and Mahler, nor did she release all restraint in the ‘Gypsy Songs’. On the other hand, her partnership with Graham Johnson showed what rewards can be enjoyed through moderation. They seemed to have a warm rapport and projected joy in their combined music-making. I suspect this evening will be seen as evidence of the development of a progressive singer, enriched by her alliance with a master accompanist.