Drifting and Tilting: The Songs of Scott Walker 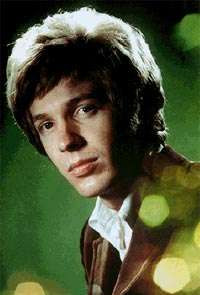 The path of Scott Walker has surely been the strangest of any major artist working in what can now only loosely be called ‘popular music’. Whereas, say, Captain Beefheart made his quantum leap from blues to avant-garde early on in his career, and Talk Talk passed rapidly from the new-Romantic to the experimental before calling time on theirs, Walker moved intently from quality chart to highbrow pop before losing his way (though not necessarily his touch) in a period of easy-listening covers prior to reinventing himself (though not therefore the Walker Brothers) with 1978’s “Nite Flights”. Thirty years on and – an admittedly increasing number of side-projects apart – he has released just three solo albums, during which time he has passed from being one of pop’s many has-beens to an icon of the progressive without equal among those of his generation who still have the urge to make music.

During this period, Walker has often spoken about taking his latter-day songs on the road (the Queen Elizabeth Hall having been mentioned as a venue of choice), but nothing has ever materialised – and it seems unlikely he will ever break his now 30-year moratorium on live appearances. Thus the non-stated premise behind “Drifting and Tilting” – a selection of his songs sung by artists who he admires or who admire him, and in a mixed-media setting such as throws a new light onto their underlying concerns, Walker’s songs ceasing to be the preserve of the recording studio and taking on a life of their own.

Which premise is fine as long as the presentation and, most of all, the performances can do justice to the music. Sadly this was not always the case here though, one or two instances excepted, it was not for want of trying. Part of the problem stems from the actual choice of songs: eight had been selected to make a continuous sequence of just under 70 minutes, six of them from Walker’s most recent album “The Drift” (2006) and two from its predecessor “Tilt” (1995). While it was unrealistic to have expected either of the astounding epics he wrote for Ute Lemper near the turn of the decade, the inclusion of songs from “Climate of Hunter” (1984) or even “Nite Flights” might have given a greater perspective on Walker’s legacy; without them, the evening tended to an unvaried seriousness that is only this music’s most obvious quality: there is humour here, too, though not as ‘we’ might know it. 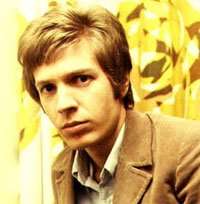 These performances certainly drew upon some notable talents. Ann-Christin Rommen enjoys a formidable reputation as director and installation artist – her stark direction well matched by Sam Collins’s sombre sets and A. J. Weissbard’s often interrogatory lighting, with choreography by Aletta Collins and costumes by Shanti Freed similarly intending no compromise. Moreover, the musical team that made possible “The Drift” was on hand – musical director Mark Warman, arranger Philip Sheppard (the band situated behind a gauze to the rear of the stage, with the string-based orchestra down in the pit) and, behind the console, Peter Walsh and Scott Walker jointly controlled proceedings as they have been doing since their first collaboration a quarter of a century ago. Whatever else may have seemed out of joint, the quality of the instrumental element was always equal to that on the albums: crucial in that Walker’s later songs make frequent reference to a range of post-war composers, in terms going way beyond the merely anecdotal to an integration of their particular idiom into his own work – the often diverse musical fabric being held together by the unifying presence of ‘that voice’.

The evening opened with ‘Cossacks Are’ – its tensile guitar motif and charging percussion (‘iconic’, a ridiculously overused word these days, was never more applicable in musical terms than it is here) presaging one of Walker’s most immediately communicative numbers. Yet as Jarvis Cocker – suited and looking out from behind a newspaper – alternately spoke and gasped his way through the vocal line, however, one likely pitfall became clear: Walker may not wish to sing his songs live, or even be interested in hearing them after they have been set down, but the quality as well as the inimitability of his voice places a heavy responsibility on those who might attempt them. Adept live performer though he is – and one whose Walker-credentials are long established (he made a signal contribution to Stephen Kijak’s outstanding documentary “30 Century Man”), Cocker did not really come close here.

Next came ‘Jesse’, the imagined dialogue between a careworn Elvis and his stillborn twin-brother set against a background of ‘9/11’. Mustering the sorrow as well as the anger necessary, Gavin Friday gave a powerfully sustained if overwrought performance – though the visual apparition of the Presley brothers, that of Jesse Garon rising up Nosferatu-like behind a screen before being transformed into a coffin which itself metamorphosed into the twin towers, was only the evening’s first instance of verbal imagery losing its ambiguity and thus its resonance on being rendered this matter-of-factly.

On to ‘Clara’, a breathtaking evocation of the hanging then the mutilation of Benito Mussolini and his soul-mate Claretta Petacci. Owen Gilhooly was more than able to convey a sense of doomed romance in his exchanges with Dot Allison’s plaintive Clara, with Nigel Richards a model of detached intensity as ‘the witness’ – the whole duly enhanced by Alasdair Malloy’s obsessive tom-tom and the graphic video imagery – but Lorena Randi’s balletic rendering of events and Lee Adams’s laying into a pig’s carcass as though a boxer’s punch-bag left little to an imagination that Walker’s music effortlessly incites. 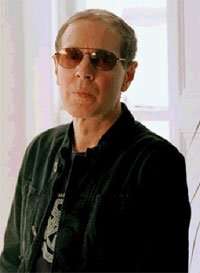 With ‘Patriot’ (‘A Single’ that never was) came the first track from “Tilt”. This was a fine vehicle for Mike Henry and one he dispatched with only minimal overstatement, Owen Gilhooly complementing him as the drunken adherent of the Luzerner Zeitung. Sad such offstage excellence was not matched by what occurred on it: Philip Herbert’s debauched transvestite was pathetic in the modern sense only as he chased after Jonathan Storey’s kite-like newspaper, with Andy Jones and Stephen Wibley a piccolo and drum combo that twice traversed the stage as though an outtake from “The Third Man”.

In the case of ‘Buzzers’, sound and vision fused far more effectively. This despairing contemplation of the failure of humans meaningfully to evolve is the more moving for its restraint, which Dot Allison (still one of the best-kept secrets among singer-songwriters of the present era), situated under her tree of coat-hangers, rendered with real poignancy. Andy Jones and Lorena Randi emerged on either side of the stage in an oblique representation of horses lengthening their faces as a more meaningful response to biological necessity, while Alasdair Malloy provided atmospheric ‘water bucket’ percussion.

This was followed by ‘Jolson and Jones’, the most derided of Walker’s recent numbers but a paradigm for his approach to song-construction in which lyrical – and hence musical – references are allowed to drift between tracks and across albums as a whole. Nigel Richards made a gallant and, for the most part, successful attempt at another ‘extreme’ Walker vocal; his tendency to over-act at least given context by a dehumanised monochrome backdrop against which this semantic confrontation between inter-war pop singers – as well as a sense of bodily descending into something ‘other’ – is played out.

By comparison, ‘Cue’ is likely the most admired number of the recent Walker songbook – not least for neutralising the distinction between humour and horror, as its initial witticism and subsequent verbal punning make plain. Abetted by the mechanistic offstage crash of Alasdair Malloy and Stephen Wibley on cinder block percussion, and ghostly presence of the flugelhorn player, Mike Henry, gave the vocal performance of the evening – not least in remaining steadfast against the extremes of texture and dynamic conjured by the orchestra. If any rendering here transcended the ‘Walker factor’, this was it.

Which sadly cannot be said of the last song. The second selection from “Tilt”, ‘Farmer in the City’ finds Walker at his most emotionally, though not therefore lyrically, direct. As if to evoke the existential lottery, auctioneer and bidder were represented by the ‘wicker’ images of Jonathan Storey and Andy Jones at either end of the stage, their call and response powerfully taken by Nigel Richards and Owen Gilhooly. Against a portrait of the Italian football team (to evoke the ‘Remembering Passolini’ of the subtitle!), Damon Albarn strode forth in ‘wellies’ (to evoke the actual title!) and gave a performance of cringing inadequacy – such as many of those in the audience could no doubt have bettered. One of Walker’s most eloquent vocals was thus reduced to a shadow of itself: had Albarn a genuine respect for this music, he would have passed the song on to another performer and avoided such a travesty.

It is always a pity when the worst is saved until last, but this failing was itself symptomatic of the difficulties in realising such a venture. No-one unfamiliar with what they were hearing could have been other than intrigued, while aficionados will not have regretted the chance to hear ‘in performance’ some of the most singular music created by anyone anywhere over the past two decades. Ultimately, though, this is Scott Walker’s music in every sense: written by and for him, it needs his voice for its essence fully to come through. However much he may now prefer to think of himself as a composer rather than a singer, the maintaining of a unified perspective is all but impossible when other singers – whether or not equal to the challenge – are brought in to take his place. It says much for “Drifting” and “Tilting” that, despite all its failings, it at least offered a glimpse of what might have been possible.