This eclectic programme drew strong audience support. The film items were not well documented; no details were given of which of the Pirates of the Caribbean movies this snippet was taken from, or its title, and the combination of Hans Zimmer and Klaus Badelt as composers was contradicted elsewhere in the programme as “Badelt, arr Ricketts”. Whatever we heard, and whoever it was by, it was a stirring and soulful starter, played with enthusiasm. Equally accomplished was Out of Africa (opening the concert’s second half) – one also had to dig around to find that this was the “opening number” from the Sydney Pollack-directed motion picture. John Barry’s evocative expanse of affecting melody was swept through with deep feeling.

After which the ‘Pathétique’ Symphony was more of a challenge to these instrumentalists, reminding that however familiar and often-played a piece of music is, the virtuosity needed to realise it can often be considerable. It would seem that the two film-score excerpts are relative plain-sailing, because the Tchaikovsky exposed some problems of intonation, tuning and ensemble. Yet it was a performance that clearly meant much to its committed charges, guided skilfully and sensitively by John Gibbons. His view of the score was integrated. Personable woodwind solos and a sturdy brass department informed this account, and the strings could soar. One curiosity was the few bars of silence before the ‘thunderclap’ introduction to the first-movement development section. Gibbons made few concessions to his players, although his quickstep tempo for the second-movement waltz sounded harried and awkward, but his very deliberate speed for the succeeding march worked a treat, on a par as a conception with Leonard Bernstein, Celibidache and Mikko Franck (all as recorded); it was steadily built and maintained to a determined close … and, mercifully, no applause. Gibbons’s unsentimental approach to this Symphony was confirmed with a flowing view of the closing Adagio lamentoso. It was well-managed, and if the gong stroke was less audible and doom-laden than ideal, the fading to nothingness was finely tapered into a long-held silence. 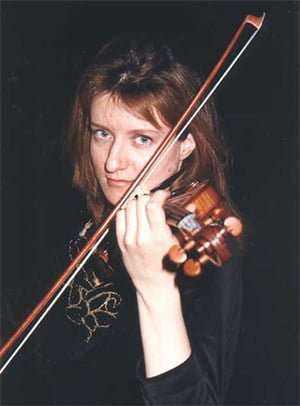 For many this concert’s main attraction will have been the belated premiere of Robert Still’s Violin Concerto. Londoner Still (1910-71) suffered a fatal heart-attack following a game of tennis. It seems that his Violin Concerto from 1969 was laid aside when the composer could not foresee a performance; hence the full score, although completed as an A-Z, is sometimes without dynamic indications and the last two movements have no tempo markings. Also there are no orchestral parts, which had to be produced for this first performance. In three movements totalling 30 minutes, this resurrection was well worth the effort, for Still’s Violin Concerto is a fine piece, the fast outer movements suggestive of Alan Rawsthorne’s music. Much activity informs the opening Allegretto, a great deal of energy needed by the soloist, amply supplied by Efi Christodoulou who had clearly mastered what seems unstinting demands. The ESO accompanied well, although tuning wasn’t always exact between soloist and orchestra, worth noting in tonal music that is nevertheless unpredictable in this regard. The slow middle movement is desolate, deeply expressed, with some solace perceived at the end and curiously reminding (me at any rate) of the Largo from Dvořák’s ‘New World’ Symphony. The finale, dance-like, suggests a jig, en route to a resolute coda. One might wonder at the loudness of the cymbal clashes, and the composer’s use of them to herald the outer-movement cadenzas, but there was no doubt as to the success of performing this work and that Efi Christodoulou was fully prepared and unswerving to her task, with perceptive conducting by Gibbons.

Although Robert Still’s Third and Fourth Symphonies have been recorded, it seems that his Second (1956) remains unperformed. If practical so to do, there would seem a perfect opportunity for John Gibbons and his players to unveil another Still premiere, one imagines.