Solos, duets and trios from the operas of Nicolai, Mozart, Puccini, Rossini, Bernstein and others, including Flotsam & Jetsam 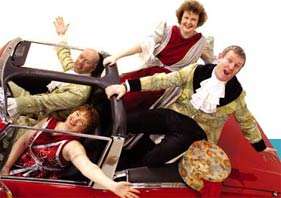 Hatstand Opera was a riot – a romp with a serious, professional intent. The purpose is to render high moments of opera entertaining, accessible and, above all, enjoyable. This was tuneful and expert singing, presented with the stylishness of cabaret.

Kirsty Young, the founder, was our ebullient Mistress of Ceremonies. She introduced herself, cheekily, as a singer destined to land the role of the maid or some other also-ran – namely, as the mezzo of the outfit. She introduced Toni Nunn as an Australian – a credit to her culture but not irretrievably of it.

Together, as Mistress Ford and Mistress Page from Otto Nicolai’s “Merry Wives of Windsor”, they sang melodiously and extravagantly – two women whose forthright talk gave the evening spring and melody, in most accomplished and pleasing voice. They were at home on the stage, too, their broad gestures, bubbling expressions and swirling movements having wit and assurance.

Then Jochem van Ast appeared. He has a most pleasing smooth baritone, light in timbre, and introduced us to a waggish Leporello, a rather more earnest Figaro, a stern Count Almaviva and a rescuing Papageno. Kirsty Young sang Berta the maid’s aria in “The Barber of Seville” and then, as Carmen, vigorously approached the city’s ramparts, courtesy of Bizet. Toni Nunn sang Puccini lusciously by the piano, accompanied by Mr Jeremy Fisher (no relation to Beatrix Potter’s imagination).

The two ladies again joined forces in the ‘Flower Duet’ from “Lakmé” and as the two heroines in “Così fan tutte” before moving to Venice for the ice cream of the ‘Barcarolle’. Jeremy Fisher ‘sang’ of how he longed to sing in opera, providing evidence of why this might not occur! We also had an assortment of one-liners in from “Peer Gynt” before pretty much concluding – and why not? – with ‘Life is happiness indeed’ from Bernstein’s “Candide”.