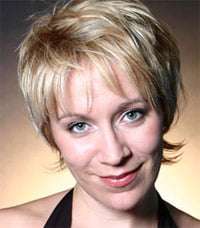 Carolyn Sampson is much admired and very busy. Her engagements have an international scope; her recordings are mostly of Baroque music, much of it in association with The King’s Consort. Hence, this concert was something of a departure. Jonathan Papp is her teacher at the Royal Academy of Music, her accompanist – and a soloist in his own right.

What strikes one very soon is how excellent her training has been. She sung in three languages (English, German and French), with a keen ear for the characteristic sounds and inflexions of each. Furthermore, she has a very clear notion of the musical form of each song and its disposition as a musical adventure. She gauges its emotional structure with self-possessed assurance, building up with steady pulse to the emotional climaxes, so that they resonate ringingly. She has, too, a clear notion of musical idiom – differentiating nicely and exactly between, say, the flowing early-Romantic lyricism of Mendelssohn, the more luscious Late-Romanticism of Richard Strauss and the cooler melodic reticence of Samuel Barber.

Sampson’s voice has much to commend it. Its glory lies in her ability to sing in soft tones when appropriate – beguilingly and enchantingly, especially so when a degree of inner emotional power is required. These she expresses in velvet strains, without artifice or tension. Two examples stand out: Barber’s “A Green Lowland of Pianos” and Haydn’s “She Never told Her Love”. Both were softly voiced and sustained private lament quite exquisitely. Her encore, Reynaldo Hahn’s well-known “A Chloris”, was of the same calibre – entrancing. Many of the other songs began in such an arresting, spellbinding way. You could have heard a pin drop.

At louder moments, her voice was less fully satisfying, and coarseness broke into some of the tones. Clearly, much work had been done on this aspect of her voice, seeking ways of diminishing the rasp without, at the same time, diminishing the impact – or, indeed, her magnificent sweep as she soared up to a song’s heights. (I noted, too, that this feature was less marked in the climaxes to the French songs: while she reached them with vitality, she sang with Gallic restraint. Something less than full, open throttle suited her voice well.)

A further feature of her voice that appeared only briefly, but delightfully, was her impish sense of humour. This appeared deliciously in one of Poulenc’s “Fiançailles pour rire” – a cabaret-style song of syncopated sophistication, requiring and receiving a soft blues-edged voice with the hint of a gurgling laugh. Just as enjoyable was the tour de force of the official end to her recital – Walton’s “Old Sir Faulk”, syncopated and quirky. Carolyn Sampson visibly relaxed during these numbers: not only was she palpably enjoying herself – she was visibly on her home ground.