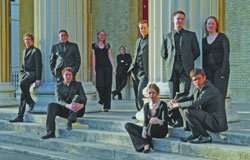 This year sees the second series of Eaton Square Concerts and includes appearances by distinguished artists such as the Allegri String Quartet, pianist Leslie Howard and soprano Carolyn Sampson. Consortium – a mixed-voice choir of professional singers – was formed in 2006 by director Andrew-John Smith and have made a most favourable impression in the repertoire of German Romantic choral song, although the choir’s roots are firmly in the music of the sixteenth-century.

This intelligently planned programme was ‘framed’ by the two sets of “Zigeunerlieder” (Gypsy Songs) by Brahms, in which the choir was joined by pianist Christopher Glynn who negotiated the sometimes tricky writing with considerable panache. The dash and drive of the songs from Opus 112 opened the proceedings and one was immediately struck by the powerful sonority invoked by the mere fourteen singers. Precision and attack were noteworthy, as were unanimous word-endings. The delicacy of ‘Rote Rosenknopsen künden’ was not overlooked, however. The three quartets that make up Brahms’s Opus 64 followed. The opening ‘An die Heimat’ conveyed all the yearning nostalgia that the composer poured into his setting of Sternau, as if the Vienna-based Brahms was longing for the North Germany of his birth.

Schumann’s first group of “Romanzen und Balladen” for mixed voices was given a rendering of uncommon sensitivity and response to the demands of both musical line and projection of the text. The contrasting elements within and between each song were aptly realised, with the concluding German translation of a Robert Burns poem – “John Anderson” – really touchingly poignant – being perhaps the quiet highlight of the concert. 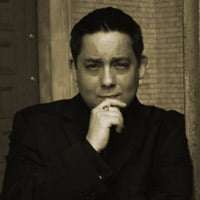 Felix Mendelssohn was, in many senses, the originator of this kind of repertoire, though in direct comparison to his successors’ music presented here, his own offerings in this genre might be considered rather ‘plain’, though it should be borne in mind that many of these Choral Songs were intended for amateur and domestic usage. There was certainly nothing amateurish about the quite estimable way Consortium handled Mendelssohn’s “Sechs Lieder”. The gentle lilt of the songs placed in the middle of the grouping contrasted admirably with the expansive ‘The vale of rest’ (‘Ruhetal’ by Johann Ludwig Uhland) and the concluding volatility of the ‘Hunting song’ (Eichendorff), with its almost breathless suggestion of the chase.

The all-Brahms second-half started with three of the remarkable Kanons for women’s voices, which might potentially be considered a merely academic exercise on the part of the composer. On the contrary, these little gems are most expressive and the last – ‘Ein förmi ist de Liebe Gram’ – quite eerie with is almost direct reference to ‘Die Leiermann’, the concluding song of Schubert’s “Winterreise”. Whether the allusion is intentional or not, the interweaving voices created a well-nigh ghostly effect. The intense part-song “Dem dunkeln Schoß der heilgen Erde” gave one pause for thought as to the variety Brahms was able to conjure from his comparatively modest forces with unison phrases contrasted with affecting harmonic writing perfectly suited to the colouring of the words. Brahms’s first set of “Zigeunerlieder” brought the concert to a stirring conclusion, though again the more reflective settings made their mark without ever descending into sentimentality.

If there was one caveat, it was that the generous acoustic of St Peter’s was not always ideally suited to music which was intended for a smaller, less reverberant, space or – in some instances, such as the Brahms part-song sung at the dedication of Schumann’s tombstone – for outdoor usage.

But the singing was consistently praiseworthy, as was the unfussy, purposeful and insightful direction of Andrew-John Smith. Consortium’s first recording, under Smith, is to be of Brahms’s secular music. I look forward to that.