Occasionally one is privileged to attend a concert that lies outwith the normal parameters of reviewing, almost hors de concours.

Alfred Brendel’s final appearance in the Usher Hall (he retires from the concert platform at the end of this year, in Vienna, also with Sir Charles Mackerras conducting) was one such event. Brendel has long enjoyed a special place in the affections of Edinburgh audiences, and so this event had a special frisson. Accompanied by one of long-term musical collaborators, the Scottish Chamber Orchestra and Mackerras, this was less a performance in any conventional sense, more an intimate act of communion with the composer.

If the demonic “Don Giovanni” – a dramma giocoso in Mozart’s description – is arguably the most profound of the operas, this darker side of Mozart finds its most complete counterpart in the G minor Symphony and the C minor Piano Concerto which made up the programme’s first half.

Launching without ado into K550, we were immediately plunged in medias res. Mackerras’s way with the work strikes an ideal balance, pressing forward urgently in all four movements, unflagging in its momentum but at the same time never sounding hurried. Unusually, Mackerras re-balanced the symphony’s emotional apex towards the finale that – with both of its repeats observed – occupied the same structural importance as its counterpart invariably does in the Jupiter Symphony. By contrast, although observing the first movement repeat, he eschewed repeats in both the slow movement (taken swiftly) and in the Minuet (which drove implacably forward with formidable impetus). The overall effect was of a constant onward motion and set one thinking of Shakespeare’s sonnet “Like as the waves make towards the pebbled shore so do our moments hasten to their end”. It was as though from the very outset everything was hurtling forwards with an unstoppable momentum towards the finale’s crunching discontinuities. The Scottish Chamber Orchestra, with rasping natural horns and elegant wind playing, responded magnificently. 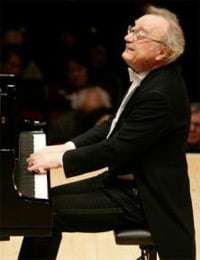 Of Brendel’s ‘assumption’ of the solo role in the C minor Piano Concerto it is difficult to write dispassionately. Whatever the (very) minor lapses, they were entirely inconsequential when set against the essential rightness of the conception. In Brendel’s questing hands is there a more quintessentially Mozartean moment than the first movement’s close with arpeggios rippling unnervingly to a muted tense standstill. The slow movement had the gift to be simple and yet there was also an impassioned almost operatic lyricism too, whilst the finale was stern, swift and unbending but shot through with shafts of major-key sunlight all the more poignant for their brevity.

There have been many magnificent performances of this concerto – I vividly recall Clifford Curzon, George Szell conducting, in this same hall – but where the combination of Brendel, Mackerras and the SCO undoubtedly scored above almost all others lay in the very completeness of their rapport. There was an all-round unanimity between soloist, conductor and orchestra, a rare sense of barely suppressed tensions seething just below the surface. In both works there was an unerring ability to strike exactly the right tempo in every movement and, just as important, to sustain it.

Minor-key Mozart found its perfect complement with Dvořák at his most uplifting and joyous. Mackerras may have first conducted at the Edinburgh International Festival in 1952 (this was evidently his eighty-seventh appearance) but even before then his studies had taken him to Prague and the great Václav Talich, creator of the Czech Philharmonic. Nearly sixty years later Mackerras remains an unparalleled interpreter and authority on Czech music (although he wears both his authority and his years lightly).By comparison with his serenades – one for winds, one for strings – Dvořák’s Czech Suite has suffered a degree of neglect. Here it emerged fully their equal with the insidious third movement ‘Sousedská’ (a dignified slow dance), the ‘Romance’ superbly played by the SCO’s glorious strings and the exciting closing ‘Furiant’ whose cross-rhythms fairly crackled with energy, working up a real head of steam. Earlier as a gentle lead-in we listened to the gravely beautiful Nocturne.

Following the concert, Jonathan Mills (Director of the Edinburgh International Festival) announced that Sir Charles had agreed to become Honorary President of the Festival, a position unfilled since the death of Yehudi Menuhin. Modest as ever, Sir Charles characteristically responded that he had no idea what these “duties” might entail but that he would do his best to discharge them. The audience rightly gave both him and the Scottish Chamber Orchestra a standing ovation.