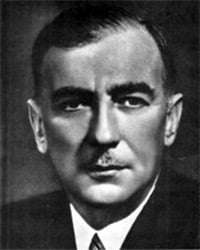 Karol Szymanowski’s opera “Król Roger” (King Roger) is rarely heard outside the composer’s native Poland, let alone seen in a staging. In the UK there have been concert performances under Simon Rattle at the Proms and under Jacek Kaspszyk at Sadler’s Wells as part of the visit there of Polish National Opera; both are available on compact disc. So the inclusion of two performances of a Polish staging adopted by the Mariinsky Theatre and given under Valery Gergiev was most welcome.

From an orchestral perspective this was a wonderful evening. Gergiev is not one to moderate the obvious eroticism of the score nor temper its more grandiose passages, and his sure sense of theatre meant that the drama – much of which is heightened by what goes on in the pit – never flagged. The Dionysian moments had an appropriate mix of allure and danger, and the final orchestral blaze as Roger greets his new dawn had shattering intensity.

Overall the performance might have built to an even greater climax had not there been two intervals; the last act is so short that it must have been hard to rebuild the necessary tension in the time allotted. But Szymanowski’s highly individual palette, particularly the woodwind colours and percussion effects, were vividly brought to life by the excellent Mariinsky players. 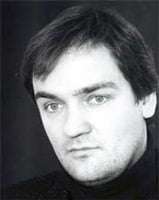 Vocally there was much to enjoy, too. Andrzej Dobber charted with intensity Roger’s passage from monarch to self-doubter and eventual renewal, his big bass-centric baritone blazing out across the footlights. He’s a magnetic performer. Queen Roxana has some pretty stratospherically high music to sing which needs an ethereal and seductive quality of its own; Elżbieta Szmytka’s interpretation is familiar from Rattle’s recording, but her voice has now developed a beat and a slightly hard timbre that no longer suits the part as well. She is, though, a compelling figure, and was appropriately emotionally aroused yet intellectually confused in her varied responses to the shepherd. 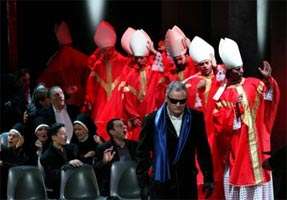 Pavlo Tolstoy as the shepherd turned out to have the necessary vocal guns for this treacherously high and strenuous part. More honey and slightly less insistence to the tone quality would have made it even better. He certainly caught, like the orchestra, that sense of menace that underpins what seems to be the character’s attractive credo. Is there any other part like this in opera? In opera, most seducers of steadfast men are women – here in essence we have a male-male seduction.

The modernist production certainly made no attempt to conceal these homo-erotic elements. The opening cathedral scene was set in some dark church space and the opera started in silence as the chorus, dressed in drab, modern-day costumes, gradually filled the pews. When Roger arrived with Roxana they were dressed in chic modern clothes; their henchmen indicated that the state was probably repressive. Only the king’s advisor Edrisi, dressed rather flamboyantly, had any colour. In Mariusz Treliński’s production Edrisi is less the provider of political guidance and more an agent provocateur. He seems physically attracted to both king and queen and to the shepherd, and almost goads Roger to become entangled with liberated attitudes espoused by the shepherd.

The shepherd himself enters the cathedral dressed in white and relentlessly spot-lit, making him seem bright, white and almost unearthly. It is a deliberately potent image. His initial rejection by Roger and the churchmen is violent and repressive.

Act Two takes place on an breezy outside terrace, with a curtained screen leading elsewhere: other places in the palace, the Dionysian world and, sometimes, most unsettlingly, to a black void – perhaps the deep recesses of the mind. The spaces-beyond change by means of subtle use of lighting and projections. The lurid bacchanalian dance is seen through the screens – it was perhaps not as excitingly choreographed as it might have been. There was also an odd audible crunch that emerged from the stage as Roger entered the fray and was stripped of his clothes – it sounded almost as if a microphone had been torn off – and careful observation did reveal other singers to have what looked like microphones taped to their costumes. Were the singers being amplified or was this for recording purposes? I do hope it was the latter.

The final act finds Roger in his hospital-bed wrestling with his inner demons. At the end of the opera we find Edrisi, dressed in white, left mourning beside a covered body in the bed. Whether this body be that of the shepherd or of Roger is left hanging, although Roger himself is seen on the stage at this endpoint – but perhaps only as a ghostly observer of his dead self. These directorial uncertainties are certainly matched with latent ones in the score and libretto, but in the end it perhaps undermined the hopefulness of the opera’s final moments.