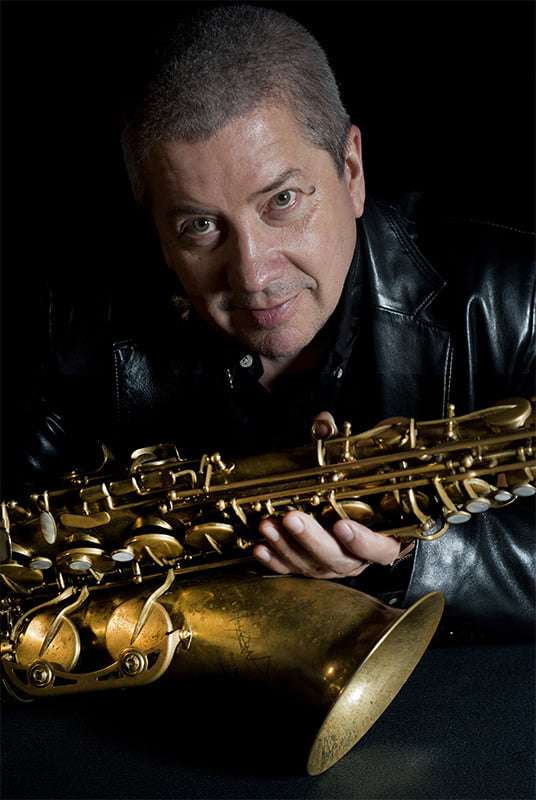 No surprise that Andy Sheppard’s latest album, promoted here, is on ECM: menthol-cool saxophone improvising on folk-like melodies, effects-drenched guitar, spacious bass and minimalist drumming – all hallmarks of the label. Jan Garbarek might seem an inevitable touchstone, but such a comparison would be unfair to a saxophonist who’s spent decades carving his own path through solo, big band and classical music.

Eivind Aarset’s guitar-playing ranged from the harp-like to richly textured and reverb-laden atmospherics, occupying a space somewhere between Terje Rypdal’s quieter moments and the ambient musings of Robin Guthrie of Cocteau Twins fame. Anyone familiar with Sebastian Rochford’s energetic drumming with Polar Bear and Acoustic Ladyland would probably be wondering how he could fit into such a hushed setting, but he played with a featherlight touch using mainly brushes and mallets to dab in cymbal splashes and muted rolls. One exception was an extended solo, which built from moth-breath softness to full-kit battering. Michel Benita’s biography states that he is “neither the most vehement nor the most intrusive double bass player around” – especially true in this setting, where he provided unobtrusive support somewhat reminiscent of ECM bassist Arild Andersen.

As if aware that all this quietness could be soporific, Sheppard joked that the second number was called “Forever and a day – because it takes so long for a bar to go by!” No chance of nodding off, though, with a later number that emerged from a snarly and sinister guitar solo which, when the bass and drums joined in, could almost have formed the soundtrack to a Scandi crime movie, before Sheppard’s intense soprano provided a searing descant. In contrast, Sheppard’s later tenor solo was an artful blend of melodic fragments and dense multiphonics. ‘And I love her’ (The Beatles), played with the sleepy insouciance of Fleetwood Mac’s ‘Albatross’, provided a delightful finish to this charming set.

As a warm-up act, Estonians Kadri Voorand and Mihkel Mälgand provided a marked contrast to Sheppard’s set, playing a style of music almost impossible to describe: a bit Joni Mitchell at times, a bit cabaret at others, sometimes plain bonkers. Scatting, vocal looping, piano-playing, xylophone tinkering, bouncing around the stage cajoling the audience with repartee, Kadri Voorand was a force of nature, Mihkel Mälgand playing a good-natured supporting role on bass. Estonia’s population is only 1.3 million – all credit to the London Jazz Festival, and Andy Sheppard, for promoting artists for whom gaining a wider audience must be a challenge.