The great saxophonist’s collaborative project with pianist Marilyn Crispell and Carmen Castaldi on drums creates jazz remarkable for its flowing lyricism, delicate texture and inspired interplay. Grammy Award-winning composer, saxophonist and producer Joe Lovano’s innovative compositions for Trio Tapestry are ‘some of the most intimate, personal music’ he has recorded to date, in Lovano’s own words. ‘We play together like an orchestra, creating an amazing tapestry. I brought in the material, but there’s an equal weight of contribution, creating music within the music, and harmonising it in a really special way,’ Lovano says.” From Southbank Centre website

Why a support act for a trio with Joe Lovano and Marilyn Crispell, and hence plenty of pulling power? We got a hint from all the ECM merchandise in the foyer, confirmed by the stage announcement that the famous jazz label was celebrating its fiftieth anniversary by taking over the entire South Bank Centre for the day. ECM superstar Jan Garbarek had bagged the Royal Festival Hall, but a packed Queen Elizabeth Hall felt right for a fellow saxophonist revered by jazz cognoscenti, even one who’s only just debuted on ECM. And it was commercially smart to use the same stage to promote the lesser-known ECM artist and Albanian vocalist Elina Duni. 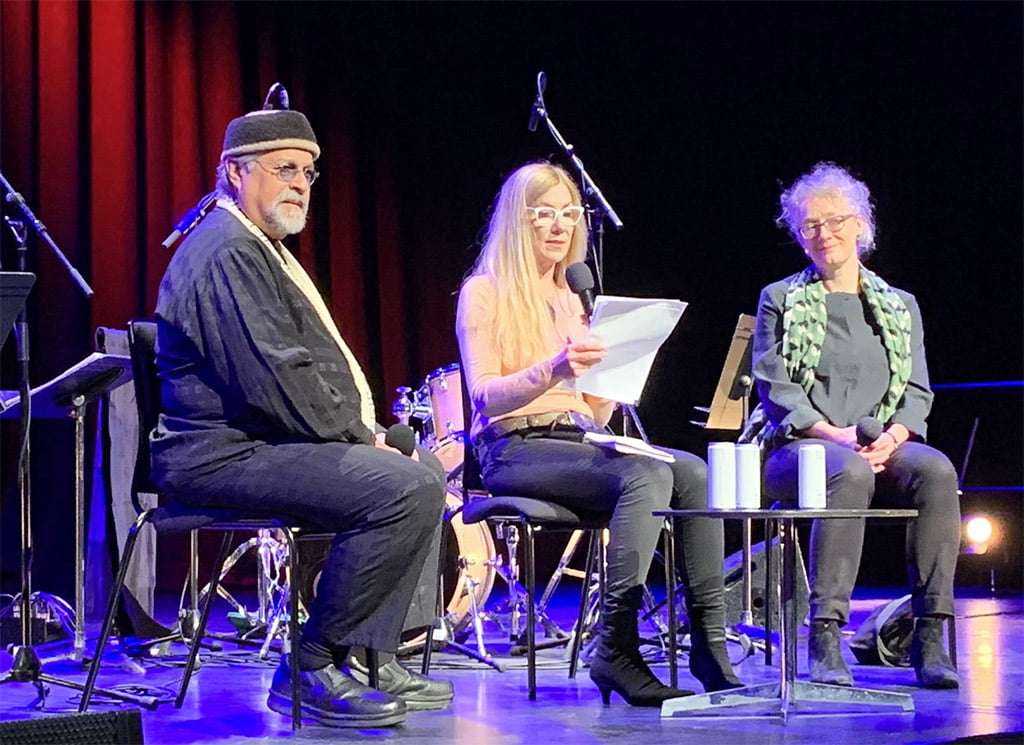 And she deserves to be better known, judging by her exquisite performance with guitarist Rob Luft. Much of the duo’s repertoire was traditional Albanian songs ranging from plaintive to dance-like, Duni as expressive with her body as with her voice, fingers dancing while she scatted as if playing an invisible trumpet, entire body swaying when singing a dance-like tune. Luft is a subtle accompanist, his nimble fingering and rack of pedals providing everything from effects-drenched colour washes to solos over looped riffs, to dervish-like runs matching Duni note for note. This year, Luft became a BBC New Generation jazz artist, and I hope we’ll be hearing a lot more of both him and Duni.

Following such a sensual and playful opening act, Trio Tapestry sounded austere – they even looked austere, all three players dressed in black and grey and the lighting never changing from muted orange, Lovano’s bright-red neck strap a lone thread of colour. And musically, the threads felt loosely woven, hints of melody unravelled by atonal scrabbles and flurries. In a promotional video, Lovano explained the trio’s name by saying that the absence of a bass “creates an amazing tapestry” and this lack of ballast made the music often feel aerial – shifting, atonal, restless. A saxophone gust here, a rustle of agitated piano there, prodded by Castaldi’s sparse drumming.

Castaldi’s been compared to Paul Motion, and he’s undoubtedly similar in how he hints at rhythm rather than laying down a beat. I thought of a much earlier ECM recording on which Motion was the drummer, Paul Bley’s 1986 album Fragments: Castaldi as Motion, Crispell’s piano a thunderstorm compared to Paul Bley’s raindrops, Lovano’s saxophone more hurried than John Surman’s. I would have liked the quartet line-up of Fragments, a Bill Frisell equivalent on guitar to provide a warmer sonic weave. Or a bassist, perhaps, to provide wood for the sparks of melody that barely flickered before being gusted into new sparks, new directions.