“Swedish bassist, cellist, composer and arranger Lars Danielsson teams up with an all-star lineup for the London première of Liberetto; with the talented French pianist Gregory Privat bringing his powerful storytelling and rhythmic sensitivity thanks to his Caribbean and Creole influences, the former e.s.t. drummer Magnus Öström carrying his broad style and with British guitarist John Parricelli’s wonderfully subtle sound. Together, the band discovers new musical spaces and the freedom of music between chamber jazz, classic and European folk music.” from Wigmore Hall website

Anyone unfamiliar with this music gets a hefty hint from its name, a portmanteau of ‘libretto’ (hence classical music) and ‘liber’ (the freedom of improvisation). And sure enough, this performance was European chamber jazz par excellence – and what better setting for that than the church-like intimacy of Wigmore Hall? 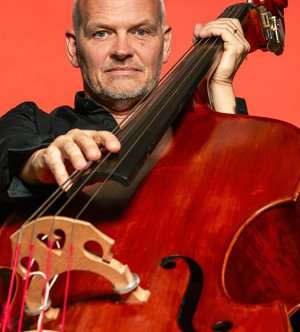 A pre-performance message projected above the stage asking people to suppress coughing drew a good-humoured chorus of coughs and laughs, but the audience soon settled when Lars Danielsson opened with a gently plucked melody over Grégory Privat’s rippling piano and Magnus Öström’s swishing brushwork. Öström stuck to brushes throughout both sets, his drumming often as lowercase as e.s.t., the trio that brought him fame. Brushes were a wise choice, as sticks would have risked overwhelming both the music and the venue’s acoustics.

Even more muted in the opening number was John Parricelli’s guitar, swelling like a plaintive seagull cry over the folk-like melody picked out on bass – then submerged when Privat unleashed a torrent of notes on the second number, clave riffs drifting in then out like a warm breeze from his birthplace of Martinique. Parricelli led the next tune with a lovely flamenco-tinged opening over subdued piano and bowed bass. Then it was back to Privat for ‘Lviv’, whose piano melody was catchy enough to hum until Privat’s complex solo full of knotty harmonies – unknotted for ‘Passacaglia’ (despite its name, played in 4/4 not 3/4), whose clean counterpoint suggested J.S. Bach but with a jazz sensibility, and so felt like a nod towards Jacques Loussier.

And speaking of nodding, Privat did plenty of that on the second-set opener, throwing his whole body into his solo, head pumping rhythmically as he crouched above the piano stool like a jockey out of the saddle urging his fingers to go faster, faster. Then perhaps the most dramatic mood switch of all, as Danielsson turned the musical lights down with a solo full of tapped harmonics and melodic quotes from Joni Mitchell’s ‘Two Sides Now’ – before turning the lights up again with another of his tunes pretty enough to hum, ‘Agnus Dei’, which he dedicated to his mother.

Only one tune in this varied and beautifully performed concert risked outstaying its welcome, a piece towards the end that started with a promising sultry groove but climaxed with uninspired blues-rock riffing on guitar. No matter, because the encore gave us in the audience a lovely lilting lullaby to send us home after two hours of happiness, and earned the band a standing ovation.