“Pianist and composer Nik Bärtsch collaborates with visual artist Sophie Clements to explore the interplay of light, water and sound in a new audio-visual piece. In the piece, inspired by a zen poem titled ‘The Moon in the Water’, light reflects on a body of water and we discover a serene beauty at their meeting point – still, yet full of movement. Balanced on seemingly infinite water and light, Bärtsch’s solo piano translates the elemental into sound. After meeting at a festival in 2015, the pair found a mutual direction in their different practices – a focus on simple forms. Bärtsch’s minimalist approach to the piano, full of ritualistic melodies, mirrors the simple beauty found in Clements’s striking set design and hypnotic images of waves and skies.” From Barbican Centre website 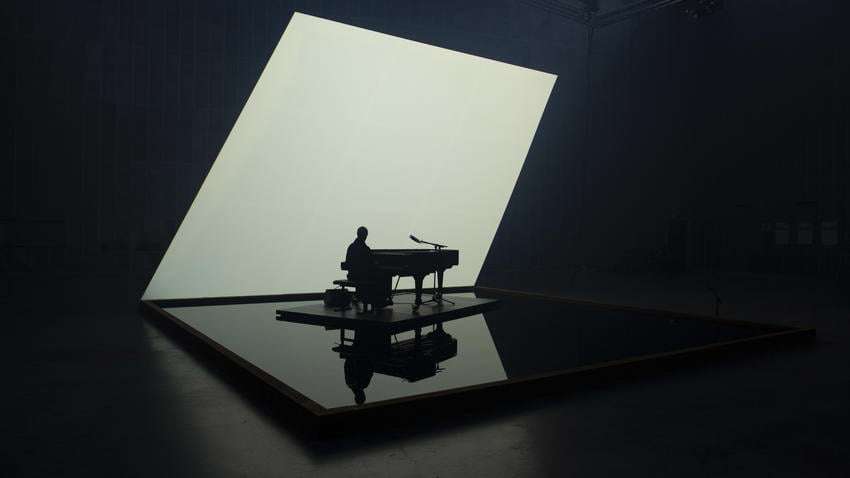 When you’ve fled the blackness of a cold wet night in London, newspaper pulped to a mush by the rain and coat beaded with raindrops, it’s slightly unnerving to sit in the darkened cavern of the Barbican’s concert hall – and see spotlights slicing the darkness into triangles and cones of dry ice, languidly shifting like rainclouds. Then to see a spotlit grand piano on a platform in the middle of a water-filled moat, mirror-black and still but later agitated into ripples, or into ringlets as if pecked by invisible fish or pocked by water drops.

Moody visuals, then, and a clever feeling of bringing the outdoors in, but what about the music? Before Nik Bärtsch stepped over the temporary gangplank to his islanded piano, a couple behind me were talking about Steve Reich – and that’s a fair comparison. Bärtsch’s playing is all about hypnotic minimalism, often minor-key and pentatonic, often rippling like the water effects and the grainy 16mm analogue film footage that gradually emerged behind him on an enormous rhomboid screen.

After starting with single-note percussive hammering, Bärtsch shifted the mood to suit the visuals: ostinato ripples for footage of waves, spacious chords with long sustain for cloud footage, occasional dips inside the piano’s belly for zither-like strums across the wires. The film footage was cropped such that all you saw were waves or clouds, sometimes with the camera fixed on one spot, sometimes gliding above the surface as if filmed by a drone. It gave a sense of going anywhere – or nowhere. Even time was ambiguous, the film’s lighting such that it was hard to tell whether we were seeing the sea in sunlight or moonlight, at dawn, midday or dusk. Timeless too in that the deliberate visual pops, flashes and glitches created a cine-film feel, like found footage from some ancient home movie.

After the film footage darkened and sped up – multiple splices, occasional flashes of red – and Bärtsch matched the mood with hammered tonal clusters, there came a lone and hesitant clap from somewhere in the audience. I nearly joined the clapper, because it felt like the end. But no, just a significant pause before the film (or was it a spotlight?) changed to an enormous white disc, and Bärtsch’s playing became suitably moonlit, all quietude and space.

Was it all worth it? Sort of. The ideas were interesting, the execution good. But for my eyes and ears the repetition, both visual and auditory, felt too thinly stretched to keep me spellbound for eighty minutes or so. But judging by the whoops and raucous clapping from the audience, finally allowed to express themselves, both I and two early leavers were in the minority.