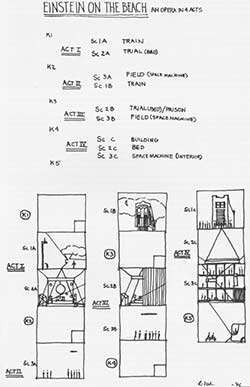 This is the first full production of Einstein on the Beach in twenty years, and the present run marks its third revival at the Brooklyn Academy of Music, where it was performed in 1984 and 1992. The production is in the midst of a year-long world tour that began in Montpellier this March and will conclude in Hong Kong in March next year.

Robert Wilson’s practice was to call all of his major works operas, and although Einstein is not really an opera, that term seems no more inapt than any other that might be employed to describe this plot-less, multidisciplinary theatre piece. At the time of its 1976 premiere it was radical in countless ways, Wilson’s non-naturalistic scenic and lighting effects and stylized stage movements reflecting his avant-garde theatre aesthetic, and Philip Glass’s groundbreaking minimalist score employing an odd ensemble of synthesizers and woodwinds and a chorus voicing only numerals and solfège syllables, with very few passages even remotely resembling an operatic aria or ensemble. Spoken texts are non-narrative and highly repetitive, often nonsensical and packed with pop-cultural and topical references. The four acts, connected by so-called “knee-play” segments, proceed without an intermission, with the audience at liberty to come and go during the 4-and-a-half-hour performance, which combines instrumental and vocal music, spoken text, dance, mime, and various images, scenes and tableaux replete with symbols and associations that relate to the famed physicist and his scientific achievements.

At this performance, violinist Antoine Silverman served as the opera’s most prominent symbol, that of Einstein himself. (In earlier performances of the BAM run, Jennifer Koh portrayed Einstein.) Seated alone in front of the stage, costumed in a shaggy white wig, white shirt and black braces, the indefatigable Silverman played extremely long solos of rapid arpeggio figures with barely any rests – and even posed wild-eyed with his tongue stuck-out as in a famous Einstein photograph. (The opera’s title may also derive from a photograph of Einstein posing at a sandy beach, but I also suspect an allusion to Nevil Shute’s post-apocalyptic novel, On the Beach.) 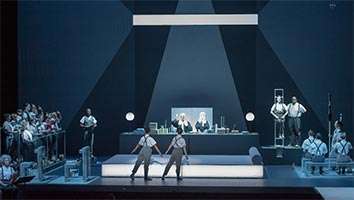 Major symbols prominently depicted include trains, clocks, compasses and rockets, allusions to Einstein’s important thought-experiments regarding time, space and relativity. A train is observed from a station platform, and a gun is fired on a moving train. A huge clock-face has no hands and a small clock shows time moving backwards and later accompanies a boy in an elevator falling in outer space, as in Einstein’s thought-experiment equating acceleration with gravity.

References to mathematics and science abound. Numerals are recited in the knee-plays, images of mathematical formulae are projected, and characters mime writing calculations on invisible blackboards. The testing of Einstein’s theories is suggested in the trial scenes as well as by depiction of astronomical eclipses, and the ‘spaceship’ scene in the final Act involves space travel and nuclear weapons. 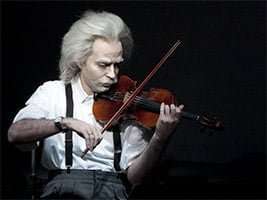 Yet, despite all of these connections to Einstein, this work is not about Einstein, nor is it primarily about the meaning of its words and images. This is a fundamentally abstract work, its essence lying in the aesthetic quality of what we experience in the theatre.

The performance began as the audience was entering the auditorium. Accompanied by slow, deep organ-like bass notes, the two “featured performers”, Helga Davis and Kate Moran, seated at the front of the stage, began the introductory knee-play – Davis naming random numbers and Moran repeating a rather nonsensical text – as the chorus members entered the orchestra pit one by one. The house lights dimmed at the scheduled starting time, and the chorus began to sing as if counting beats, but in an irregular pattern, later dividing with one group continuing to count and the other singing arpeggios in solfège syllables. These elements continued for some time, and would recur again and again in the later knee-play segments. 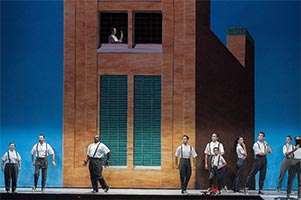 Act One comprises two rather elaborate scenes. The first depicts a train station overlooked by a tall tower from which a boy carrying a light (Jasper Newell) repeatedly launches paper airplanes toward the platform below. A chorister at the front of the stage silently gestures as if writing calculations on a blackboard. To densely polyphonic music from the instrumental ensemble and chorus, a dancer strides back and forth repeatedly on a diagonal path across the smoke-filled platform floor as a steam locomotive very slowly makes its way into the station. A brightly lit rectangle descends slowly from high above to the stage and as it reaches the ground the stage goes dark and the train vanishes. When the lights come back up, the entire agonizingly slow process is repeated again and again, each time with a larger and more varied complement of performers.

The Act’s second scene is set in a courtroom into which spectators, stenographers and jurors slowly enter and take their places. Two judges, one an older man, portrayed by Charles Williams, and the other a young boy (Newell), both wearing black robes and wigs, repeatedly declare that “this court of common pleas is now in session” and pour powdered substances from chemistry beakers onto the bench. Silverman (as Einstein) assumes his position in front of the stage and plays continuously. Davis, now portraying a lawyer, addresses the court with a monologue that includes references to “Mr Bojangles” as well as to members of The Beatles and to the American poet Christopher Knowles (who authored the knee-play texts), and the older judge delivers a rather militant feminist speech. Throughout the trial scene, the stenographers make typing gestures and the jurors frequently mime scratching their heads. When they all rise to eat and drink their brown-bag lunches, the scene segues into the second knee-play, in which Davis again recites numbers and Moran speaks another rambling text. 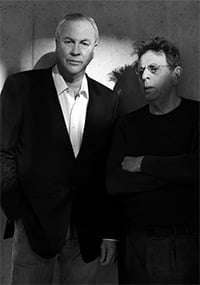 Act Two begins with an extended dance sequence choreographed by Lucinda Childs for the 1984 revival and performed energetically by dancers who initially spin and leap with legs extended, sometimes in ensembles and sometimes in pairs, but without lifting or partnering. When Glass’s music changes mood, the dance also changes to feature leaps with knees bent. Suspended above the dancers is a brightly lit ring, representing a spaceship, that moves across the stage.

The next scene, ‘Night Train’, is the opera’s most beautiful. A couple in wedding garb (Davis and chorister Gregory R. Purnhagen) are in the last car of a train that recedes ever so slowly from the audience under a night sky lit by a thin crescent moon. They emerge onto the car’s rear platform and sing a lovely solfège duet as the moon slowly waxes and then wanes. When they return to the interior of the car, the woman shocks us by drawing a pistol and shooting the man, whose expression freezes, agape in horror as the scene ends. Do these characters represent the young Einstein and his new bride, or are they just part of one of his thought-experiments?

When the trial resumes as Act Three begins, half of the courtroom is converted into a prison cell. The lawyer (Davis) again speaks of “Mr Bojangles”, and a witness (Moran) sprawls on a large bed in front of the judge’s bench and keeps repeating a short text about bathing caps seen in a “prematurely air-conditioned supermarket”, after which she acts out some of the events of the Patty Hearst case, changing costumes, donning wrist shackles, and aiming a rifle at the audience. ‘Einstein’ returns and plays as the witness recites a text with quotations from Carole King’s song, ‘I Feel the Earth Move’. A larger spaceship ring crosses above another extended dance, with the accompanying violin figures picking up speed and the Act ending with Silverman’s tongue-hanging-out pose. 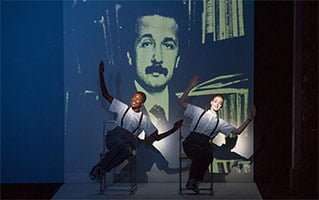 Act Four opens with a woman doing calculations behind a window on the top floor of a tall building. The choristers silently assemble in front of the building, strike a variety of poses, looking first down and then up toward the woman, and depart one by one, as Andrew Sterman plays a bluesy tenor saxophone solo. The stage then darkens to reveal a large, brightly lit horizontal bar (perhaps the front edge of the bed from the courtroom scene). As chorister Hai-Ting Chinn sings a vocalise, the bar very gradually rotates until it reaches the vertical and then rises up and out of sight – the reverse of the descending bar in the earlier train-station scene. This process takes more than ten minutes and is just one of many instances in which Wilson and Glass distort our perception of the passage of time – a rather Einsteinean feat!

The concluding scene is dominated by a three-level array of cubicles with abstract symbols in colored lights, on which choristers portray technicians operating the controls of a spaceship. Two clear elevator capsules are in constant motion – one rising and falling vertically contains a boy and a clock; another moves back and forth horizontally with a dancer and a compass aboard. ‘Einstein’ resumes playing as a miniature of the spaceship is seen launching into space against a blank backdrop, and he then departs. When the scene reverts to the ship’s control room, a man flies across the stage and soon flies back again, and the loud and frenzied music, with rapidly rising and falling scales, comes to a climax representing a nuclear blast.

Although most of the opera’s spoken texts and once-topical references came across now as utterly passé, I was still touched by the final knee-play. Davis and Moran emerge from bubble-topped hatches, apparently the survivors of the cataclysm that ends the spaceship scene. As they sit on a bench reciting numerals and text from earlier knee-plays, a bus slowly inches its way toward them. Finally, to the gentle accompaniment of the violin and chorus, the bus driver (Wilson) speaks of the need for “a soothing story to banish the disturbing thoughts of the day … a familiar story, a story that is so very, very old, and yet it is so new. It is the old, old story of love”. He tells of two lovers sitting on a park bench in the moonlight, declaring the depth of their love for one another, culminating, he says as the music dies away, “in fervent osculation.”

I suspect that most people will either love or hate Einstein. I saw it at BAM in 1984 on a last-minute whim without knowing what to expect, and I was bowled over by its novel sounds, stylized staging and mesmerizing qualities. I was unsure of how all that I have experienced of music, theatre and dance in the subsequent twenty-eight years would affect my reaction to the current production, and was pleased to find myself still enamored of this work. I was impressed by the brilliant stagecraft of the production team, the marvelous performance of the dancers, and by the Philip Glass Ensemble and chorus under the direction of Michael Riesman, who has led every performance of Einstein since its 1976 premiere. The Ensemble’s sound was better than ever, perhaps owing in part to improvements in synthesizer technology, and the precision and beauty of the choral singing was truly astounding.