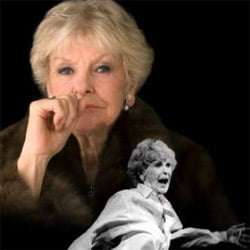 When actress and singer Elaine Stritch first performed her one-woman show based on her life (written by her and John Lahr), at the Public Theater in New York, she was in her seventies. She is now in her eighties but would have us believe differently. From the look of her she appears to be a well-preserved sixty-year-old and for sheer energy and delivery of the material both spoken and sung, she is the tops.

This is like watching a workshop that encompasses acting, singing, timing and revelation, all in one biographical performance. Miss Stritch is selective about what she tells us but she doesn’t hides the warts, the drinking, the mistakes she made in her career and personal life, because almost everything is laid out for our inspection. She herself is not fancily dressed, but wears just black leotards and a white shirt in a show the subject of which she sums up as being “an existential problem in tights”. Her only prop is a high chair that she totes around the stage usually while she is receiving astounding applause from her audience.

Elaine Stritch was born in Detroit, Michigan, to a strict Roman Catholic family. She attended a convent school and somehow found her way to an acting school where she met Marlon Brando who went out with every girl there except Elaine. Her first break was in a revue called “Angel in the Wings” in which she had one number called ‘Civilization’ (“Bongo, bongo, bongo / I don’t wanna leave the Congo”). Later she understudied Ethel Merman in Irving Berlin’s “Call Me Madam”. More plays and musicals followed plus appearances on television and in films, but she was not a household name until she came to live in London. 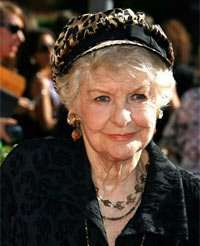 She starred in Noël Coward’s “Sail Away” in the 1960s on Broadway and in London where she eventually took up residence at The Savoy. She came back to London in Sondheim’s “Company” in the 1970s and while rehearsing Tennessee Williams’s “Small Craft Warnings” met her future husband, American actor and playwright John Bay. More films, stage work and television followed but there was always something that dogged her for a large part of her life – her drinking.

Stritch doesn’t flinch from talking about her problems with alcohol. She rationed herself at first to just two drinks a day, one before the show and one in the interval. But that was not enough and eventually she came to rely on drink so much that for much of her life she hardly felt that she was there, barely taking part in her own life. Her one-woman show is a way of reclaiming her life, something that almost happened without her.

She reveals her faults and mistakes, such as living with actor Ben Gazzara but threw him over for Rock Hudson. She lost the chance of working on a long-running television sitcom that turned out to be “The Golden Girls”. She may seem bitter but doesn’t appear to regret anything. She’s had a good life doing what she wanted to be, an actress and a singer, a performer from Detroit who finally had Noël Coward inviting her to a weekend with the Lunts. She couldn’t believe her luck. Finally, diabetes took over her life and she now has to deal with that instead of the booze. 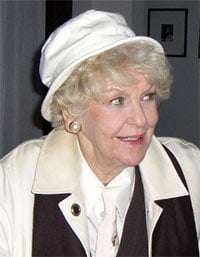 The theatrical anecdotes in this show are legion – a story about Ethel Merman dealing with a heckler during a show is a classic. When Stritch was the stand-by for Merman in “Call Me Madam” but also has one number (‘Zip’) in an out of town revival of “Pal Joey” in New Haven, Connecticut, she wondered whether she could fit in both shows at the same time. Answer from Ethel: “Go to New Haven, Elaine, and sing the fucking song!” Then there’s producer Frederick Brisson, the husband of Rosalind Russell and generally known in theatrical circles as ‘The Lizard of Ros’. He wouldn’t allow drinking in the theatre, so Elaine conspired to have a local barman deliver a present of champagne to her every evening before curtain-up with good-luck messages from Cary Grant, James Cagney, Bob Hope and others, all written by Elaine herself.

The musical side of the evening is a batch of songs, some of which became part of Stritch’s life, and some that just sum up where she was at any particular time. Sondheim looms large given she did long runs of “Company” in New York and London and she does excellent versions of ‘The little things you do together’ and her signature song ‘The ladies who lunch’. She also did “Follies” in concert and sings superb versions of ‘Broadway baby’ and ‘I’m still here’. All the arrangements are by Sondheim’s orchestrator, Jonathan Tunick, and played here by a ‘best of’ British band.

Other songs include Noël Coward’s ‘Why do the wrong people travel?’ from “Sail Away” which he wrote for Stritch, and a very moving version of ‘If love were all’. Stritch’s voice is a powerhouse with edge, perhaps obtained from the years of drinking. Like Merman, nobody sleeps when Elaine is on and yet she can knock you out with a punchy number like ‘Broadway baby’ or sing the softest ballad like ‘The party’s over’ and have you in shreds, weeping.

This is two-and-a-half hours of looking back, summing up, dusting off and starting all over again. It is a unique theatrical and musical performance – and there’s nobody quite like the incomparable Miss Elaine Stritch. Don’t miss!