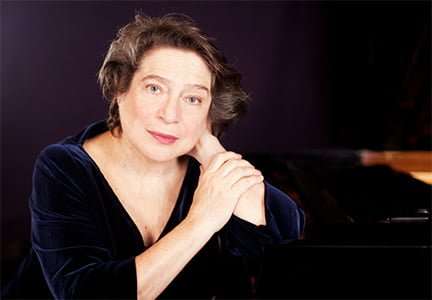 Elisabeth Leonskaja’s contribution to the ultimate recital of the current International Piano Series was often inspired. Here is a pianist that seeks and finds and does so unobtrusively. Born in Tbilisi in 1945, she developed a close professional relationship with Sviatoslav Richter, and has lived in Vienna for many years, Leonskaja doesn’t force sound out of her instrument, rather she creates it and variedly; nor does she impose herself on the music she plays, let alone fawn to the gallery. Her interpretations and her resources come from within, with discretion and refinement, and an assured long-term view of unfolding the music she chooses.

Ravel’s Valses nobles et sentimentales was impish, dry, cordial and affectionate, Leonskaja’s enjoyment of the music palpable, with retreats into fantasy given with delicious flexibility. The music of George Enescu is all too seldom encountered, regrettably, so it’s good that Leonskaja has at least his Piano Sonata No.1 in her repertoire. Enescu (1881-1955) designed a triptych of piano sonatas, all to be collected as Opus 24, but composed only the First and Third of them; the Second was mapped-out in his head but was never written down. The F sharp minor opener (1924) has three movements – slow-fast-slow – dark and brooding, richly expressed and with Eastern characteristics, followed by a festive scherzo with many rhythmic sleights of hand, then a meditative finale with liquid glissandos (made ravishing by Leonskaja) signalling a tranquil close to this 27-minute traversal. One might hear, amongst others composers, Rachmaninov and Debussy in Enescu’s mix, so three of the latter’s Préludes proved a welcome Enescu envoi. ‘Le vent dans la plaine’ crackled with dancing images; ‘La fille aux cheveux de lin’ was flowing and unsentimental, a tender portrait created; and ‘Feux d’artifice’ lit up the night-sky with brilliant scales and staccatos, and also enjoyed delicacy.

Leonskaja can seem rather efficient as a concert artist; her walk to and from the piano is brisk and business-like. Her acknowledgment of the audience is briefly courteous – no more – and she gets on with the job, straight into the Ravel, for example, and leaving virtually no space between movements: Enescu’s three passed as one, as did Brahms’s five. Yet, what the eye detects, the ear denies, for Leonskaja’s range of timbre, colour and dynamics is wide, and her playing has warmth and wit while displaying an imaginative response to scores and even an impromptu one on the night.

Her Brahms F minor Sonata (a young man’s work) was weighty and given with deliberation, the first movement with its expansive scale recognised through the observance of the all-important exposition repeat and with a tempo that searched the music for significance. With time on its side this opening Allegro was ideally ‘maestoso’, the development section almost extemporised; and if there were some smudges and awkwardness along the way, they mattered not given Leonskaja’s authority and interpretative sureness. The succeeding Andante espressivo was meltingly beautiful and deeply soulful, with the following scherzo steadily propulsive, not rushed, its trio akin to a sacred experience. The strange ‘Rückblick’ (Remembrance) fourth movement was of shadows and muffled drums, after which Leonskaja seemed very consciously to want to make the finale a substantial counterpart to the opening movement, which she mostly achieved, especially when the music burgeons to loving expression, but the flippant invention before the end seemed even more not-belonging than normal (Brahms’s miscalculation). However, Leonskaja was soon back on track and, just as is with the first movement’s coda, she made much resolution out of the heroic final chords.

Whether encores were needed is a moot point, certainly in relation to this enticing, well-made and perfectly proportioned main programme, but the finale of Mozart’s F major Piano Sonata (K332) was scintillating, Leonskaja’s fingers remarkably nimble while maintaining strength, after which Debussy’s La plus que lente was teased out for languorous nightclub entertainment.