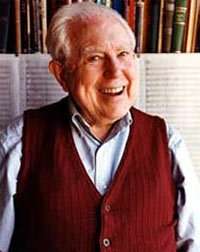 The five string quartets – so far (a Sixth is mooted) – of Elliott Carter (born 1908) are now acknowledged as one of the greatest chamber music cycles written in the twentieth century; many critics and players consider them comparable in stature to the cycles of Bartók and Schoenberg. Some — including Richard Rodda, who wrote the detailed program notes for the Pacifica Quartet’s traversal of the quartets — have gone so far as to anoint them as Carter’s “spiritual autobiography”. While any such autobiography would be incomplete without Carter’s other chamber music, orchestral pieces and song-settings, the string quartets very aptly showcase the evolution of Carter’s compositional style, complexity and musical rhetoric.

For their part, the musicians of the Pacifica Quartet — approaching their fifteenth year together — played with conviction and assurance what must be one of the most formidably challenging evenings ever presented by the Chamber Music Society of Lincoln Center. These Carter works have been a staple of the Illinois-based Pacifica Quartet’s repertoire for some years, and this concert coincided with the release of them on Naxos, an event that was aggressively marketed in the form of a post-concert CD signing, prominently hyped in an oversize program insert and an announcement from the stage.

The Pacifica Quartet’s artistic approach is distinctive from that of other champions of these works including the Composers Quartet and, perhaps most notably, the Arditti Quartet. The latter group’s recordings emphasize detail and craftsmanship — one cannot help but be fascinated by the individual parts of the machine and their continuous interaction. The Pacifica plays this music with not only the required precision but also a level of attention and energy that did not flag from the opening note of Quartet No.1 to the ethereal dissolution of Quartet No.5. The musicians also brought intense contrasts and color to these works, even utilizing different seating set-ups for the Second and Third Quartets. 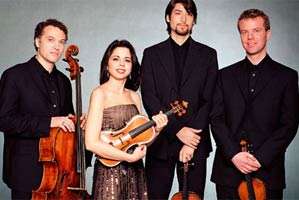 Quartet No.1 took up the totality of the first third of the program (there were two intermissions). The Pacifica seemed to emphasize the ‘American’-ness of the work — tonality is in a state of near-total suspension yet the work inhabits the same orbit as Schuman, Harris and Copland. On the other, the Pacifica emphasized hints of developments in Carter’s compositional style to come — for example, individual players seemingly in their own meters, and one of the finale’s variations in which the two violins play sotto voce sustained notes as the viola and cello engage in a rapid, filigreed ‘conversational’ duet-exchange. The glorious Adagio seemed for the first time to shed its static nature and take on grandeur, building in intensity and then seeming to simultaneously exhale and evaporate.

Following the first intermission the Pacifica played Quartet No.2. The work was a major step forward for Carter with its daunting complexity comparable to contemporary works by Xenakis and Boulez. It also marked Carter’s ascent to a major figure in the international avant-garde of art music, earning Carter both the 1960 Pulitzer Prize and UNESCO International Rostrum of Composers Prize. The seating had changed (from violin 1-violin 2-cello-viola), with the second violin and cello trading places and seating more ‘spread out’, which complemented Carter’s vision of a work for four protagonists of a very independent nature. The program-note described the first violin as “flamboyant and virtuosic”; violinist Simin Ganatra dispatched the part with stunning effortlessness, often seeming to play off the “romantic and impulsive” — and theatrical — playing of cellist Brandon Vamos. The material for the second violinist is described as “reserved and orderly” and viola as “lyrical and doleful”, but Sibbi Bernhardsson and Masumi Per Rostad also imparted a spine to the work, providing a coherent underpinning to music that seldom sustains or repeats figures but whose nine movements traverse a panorama of moods and colors. 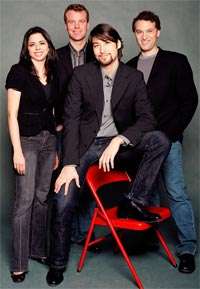 Quartet No.3 is a ‘double duo’ — first violin and cello on the left, second violin and viola on the left. Vamos was seated on a riser, with the remaining players standing. The two duos are playing in differing time-signatures and with differing tempo-markings (the opening, for example, has Duo I marked ‘Furioso’, Duo II ‘Maestoso’), and their respective ‘movements’ do not coincide with each other. When this work was first performed, the original players (the Juilliard Quartet) were hooked up to a ‘click track’ to keep them co-ordinated; three decades on, that practice has gone the way of the 8-track tape. No single listening to this work is adequate to understand the many layers of this, Carter’s most complex chamber work, yet the Pacifica’s players brought to this daunting work an uncanny level of drama (and even lush, almost Romantic playing), with the myriad musical gestures never overpowering the duos’ forward momentum or overall structure.

Following the second intermission Quartets 4 and 5 were performed, the Pacifica musicians returning to their ‘traditional’ seating. The final two quartets are not quite as ‘complex’ as the Second or Third, but do reflect Carter’s shift from music of rigorous, dense ‘maximalism’ to rhetorical intimacy and gesture. Quartet No.4, somewhat like the Second Quartet, is written in a manner that imbues each instrument with an individual ‘character’; author David Schiff suggested a work that builds from conversational bickering to intoxication. The Pacifica’s interpretative vision of the work yields music that takes on the trappings of spoken language, and goes well beyond Schiff’s simplified ‘plot’ of the work; the musicians imparted the ‘Scherzando’ with particular fury, not of a frenzied nature but extrovert, virtuoso goose-bumps; the ‘Lento’ was also particularly effective, with individual instruments and pairs rising above gentle, sustained chords with short, characterful outbursts that provide punctuation to the movement’s almost-suspended sense of time.

Quartet No.5 is in twelve intricately constructed movements, built from small musical motifs and figurations that the individual instrumentalists play in the work’s introduction. The other odd-numbered movements are interludes in which motivic and musical figures are tossed around from the even-numbered movements (‘Giocoso’, ‘Lento espressivo’, ‘Presto scorrevole’, ‘Allegro energico’, ‘Adagio sereno’, ‘Capriccioso’). These musical ‘games’ bear a strong similarity to many of Carter’s recent works for solo instruments, and the Pacifica Quartet effortlessly served up and played the musical figurations like so many badminton birdies; the ‘named’ movements are among the most emotion- and color-rich music of Carter’s quartets, the Pacifica drawing stunning contrast between the interludes and the profundity of the named movements. ‘Presto scorrevole’ crackled with an enlivening energy that one would not expect of an ensemble that had navigated the complexities of the other four quartets in the two previous hours. ‘Adagio sereno’, in which the instruments play sustained harmonics, creating and transforming an almost prismatic array of musical colors reminiscent of Morton Feldman’s beautiful late works, was played with particular beauty. The final ‘Capriccioso’ percolates with pizzicatos before ending with a sequence of arco gestures that ease the work to a quiet ending.

The Chamber Music Society’s regular venue, Alice Tully Hall, is undergoing reconstruction; the hall for the Carter cycle was in the New York Society for Ethical Culture, a very uneven acoustics, but balances were just and detail clear in the various seats from which I was listening. The Chamber Music Society put a great deal of trust in the Pacifica Quartet with this formidable program — and that trust paid off, with excellent performances (in the happy-looking presence of the 99-year-old composer) that not only justified the reputation of Carter’s masterpieces but shed new light on them, fleshing out the music’s elusive, multifarious qualities with character and feeling. Now to Naxos’s recording…