Rose, a bride and a performer – Amanda Squiteri
Mama, a mother and much else – Susan Narucki
Stella, an astronomer – Katherine Rohrer
Kid, a boy – Jonathan Makepeace
Zen, a supposed seer and not much else – Matthew Garrett
Harry or Larry, a bridegroom and a clown – Morgan Smith
Roadworkers – James Michael Zally and E. C. Kelly 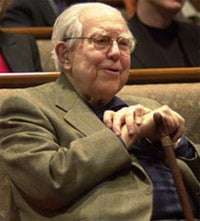 Elliott Carter (born 1908), arguably the most esteemed living American composer, is a few days shy of his 99th-birthday (on 11 December) and shows few signs if any of slowing down.

He continues to write demanding works – from miniatures for solo instruments to full-scale concertante works with orchestra – in the cosmopolitan, post-war ‘tonality-free’ style. It may come as a surprise to learn that he has written only one opera in all of this time – just under a decade ago. More surprising is the fact that this work, “What Next?”, requires only eight characters and a small orchestra, took nearly ten years to receive its New York stage premiere.

The opera itself was in fact the second half of a very satisfying retrospective that included five works for solo players and small ensembles written from 1990 to 2002. These works were performed by members of AXIOM, the Juilliard School’s recently-formed contemporary chamber orchestra (modeled on such ensembles as Ensemble Modern and the Schoenberg Ensemble).

All of the pieces received solid and edifying performances by the young players, who clearly understand that Carter’s instrumental music often takes on the character of a monologue or dialogue.

Fantasy – Remembering Roger for solo violin (written in memory of Roger Sessions) was played with flinty, edgy flourish by David Fulman. Flutist Alexandra Sopp and clarinettist Gilad Harel navigated the rhythmically daunting filigree of Esprit Rude/Esprit Doux with charm and wit. The strongly contrasting meditative and edgy moods of Au Quai were conveyed well by bassoonist Justin Brown and violist Nadia Sirota, whose combined sound had an unusual warmth in a dry acoustic that can be unforgiving to some instruments and voices. Con leggerezza penzosa – Omaggio a Italo Calvino contained some of the most challenging virtuoso music of the evening and was dispatched with amazingly secure playing, at once whimsical and emphatic, by clarinettist Stephen Zielinski, violinist Keats Dieffenbach, and cellist Clarice Jensen. The final work of the first half, Luimen, is written for the unusual combination of trumpet, trombone, harp, guitar, mandolin and xylophone; conductor Jeffrey Milarsky and the players traversed a startling array of sound-colors in a work that turns on a hairpin from pastoral to pointillistic. The three string-players, who have a good deal of tight ensemble playing in the first third of the piece and individual, highly exposed passages throughout the rest of the work, were particularly impressive.

The big draw of the evening (the first of four performances of this program) was, of course, the opera. All of the action of “What Next?” takes place on what appears to be a tight highway turn inside a tunnel strewn with plastic highway dividers, twisting from the rear of the stage’s left-side directly into the lip of the stage, with the characters themselves heaped across individual dividers as if a catastrophe of some kind had taken place. The opening roar of percussion suggests a massive collision of some sort; as the action begins, each character leaves the pile, clearly disoriented.

And from the first vocalizations, it was apparent that this production is extremely well cast. We learn that three characters were on their way to a wedding. An angst-filled Mama, sung and acted by one of today’s best sopranos focusing on new works, Susan Narucki, at first seems oblivious to bride-diva Rose, brought to life with equal measures of restrained camp and portents of doom by Amanda Squiteri, and Harry or Larry (he answers to both names, and a few others), a bipolar clown whose shifts from menacing to tender – when he’s not busy catching high-heel shoes with his fishing pole – were portrayed with some of the most forceful acting of the evening by baritone Morgan Smith, whose voice can shift from warm to penetrating in the blink of an eye.

The other characters may or may not have something to do with each other: new-agey pseudo-Buddhist Zen (sung and acted wryly by tenor Matthew Garrett), Stella the hot-to-trot astronomer (mezzo Katherine Rohrer’s way with the libretto was filled with vivid color and inflection), and a Kid who may or may not be Stella’s son, and whose handful of utterances and actions (sung with startling power by Jonathan Makepeace) may or may not hold clues as to what happened.

Paul Griffiths’s libretto is more than a little reminiscent of Eugen Ionescu and Samuel Beckett plus an occasional twist of David Mamet, with cleverly constructed and juxtaposed dialogues among these six characters in search of … their wrecked vehicles? Their destinies? Scientific or philosophical answers? Escape from some sort of existential purgatory as two roadworkers move those dividers out of the way?

The stage action is accompanied by a classical-sized pit band, augmented by industrial-strength percussion and a tuba. Maestro Milarsky and the intrepid young players of AXIOM provided outstanding color, sweep, and instrumental dialogue and commentary, playing the central, slow instrumental interlude that divides the single act into two parts with particular beauty.

The production included supertitles, which were projected well above the action – but were seldom needed given the singers’ consistently excellent diction.

The composer was in attendance, and the audience rewarded the superb performers and production – and, of course, the composer – with a prolonged ovation.