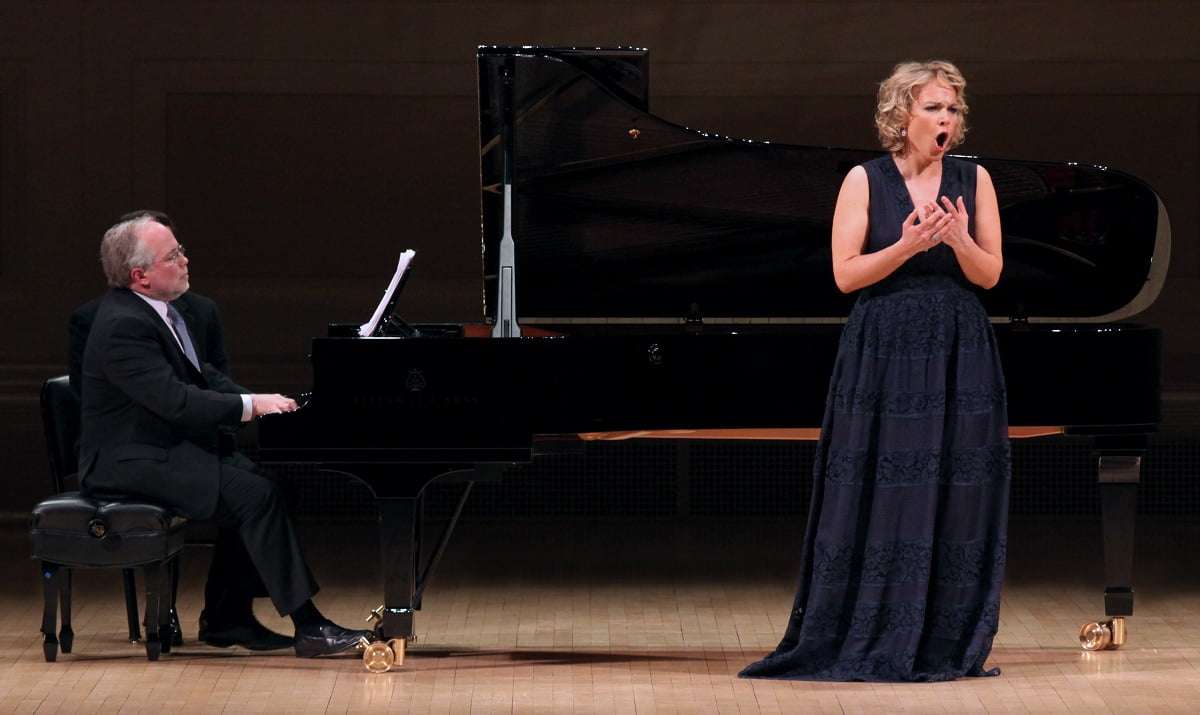 Things started off rather coolly, though, with fourteen Lieder by Brahms. Garanča’s naturally generous voice was elegant in the first four settings, but she was somewhat detached until, in ‘O liebliche Wangen’, she sang with more fervent sentiments – particularly in its closing lines, bidding the “Schönste der Schönen” (fairest of the fair) to come quickly and end her beloved’s heartache. Then, in a calm and intimate rendition of ‘Sapphische Ode’, Garanča’s line and Murphy’s accompaniment were quietly mesmerizing, and the expectant lullaby ‘Ruhe, Süssliebchen’ also benefited from Murphy’s gorgeous playing. Stand-outs were ‘Mädchenlied’, radiant and fluid but with a beautiful sense of understatement, and ‘Von ewiger Liebe’ – wisely placed before intermission – with its slow build-up to a powerful climax in which Garanča reached dramatic heights.

The second half brought a wardrobe change and a more exciting mood, beginning with an impressive trio of mélodies by Henri Duparc. One of the highlights of the afternoon was Garanča’s spectacularly operatic rendering of ‘Au pays où se fait la guerre’, the cumulative power of the repeated “J’attends encore son retour” (I still await his return) creating impending calamity for a woman whose darling has gone off to war. Duparc’s music is especially well-suited to Garanča; she traversed the long and winding invention with remarkable dexterity. The softness of her ravishingly realized ‘Extase’ – with its wistful piano interlude – was released to stunning intensity, and the calm opening of ‘Phidylé’ gradually gave way to an even more powerful display.

Rachmaninov shows Garanča’s talent to be rich, colorful and bursting with illustration. Highlights included ‘I wait for thee’, delivered with a restrained ecstasy that finally erupted, and a sumptuous account of the heartbreaking ‘Sing not to me, beautiful maiden’. There were three encores: further Brahms, a jubilant ‘Meine Liebe ist grün’, then a shining ‘Widmung’ (Robert Schumann), and finally a tender piece from her native Latvia, ‘Aizver actinas un smaidi’ (Close your eyes and smile) by Jāzeps Vītols.