Given so many emoting, agonising, publicity-seeking pianists these days – all ages, all shades of glamour statement and body language – it’s something of a tonic to meet an artist who does nothing but sit at the instrument, dressed in a sober business suit, and gets on with the notes. 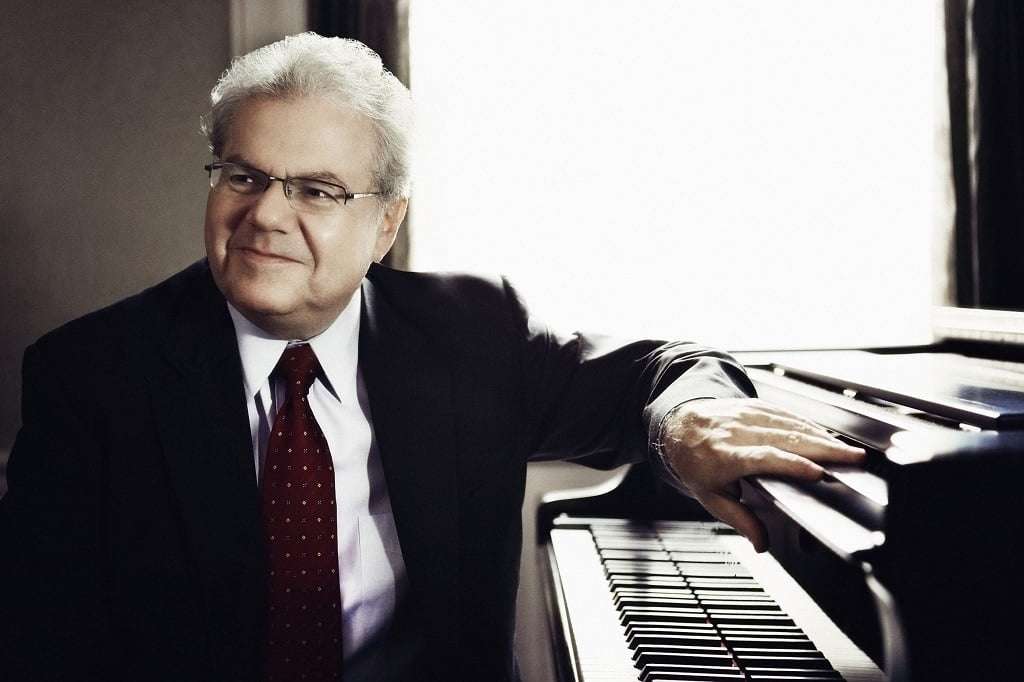 New York-based, Emanuel Ax, turned seventy a couple of weeks ago, has never been a demonstrative performer. With him, in whatever capacity – solo, Concerto, chamber-player – you know exactly what you’re going to get. Reliable, clean delivery, expressive restraint, a high-profile musician without airs or graces. His disciplined hand action, close to the keys and quietly shaped, would have had Clementi’s approval. Just the occasional flutter of the right hovering before melody notes. An evening in the office.

Back in student days, the Brahms Rhapsodies used to be a favourite playground – inviting the boys to gush, the girls to swirl. Ax’s trajectory had less to do with ardency than to traverse the landscape dispassionately, crafting an objective, taut structure. Intimacy of delivery was to the fore, not a big forte in sight, the lower registers touched but neither aggressed nor dramatised.

George Benjamin next – programming-wise, the tested Henry Wood trick of secreting a soupcon of modernity among tried old favourites. “Conceived for the hands of young pianists”, Piano Figures (2004), premiered by Pierre-Laurent Aimard in Luxembourg in 2006, comprises ten aphorisms, loosely in the tradition of Beethoven’s Bagatelles. Should we not like any of them, never mind, Ax told us with the confiding air of a kindly uncle about to administer a nasty pill, some were only a matter of seconds. Given the context, I think I’d have preferred the tougher concentration of Schoenberg’s Klavierstücke Opuses 11 (similar duration) or 19 (shorter). But Benjamin played to the home crowd (interested murmurs among the shuffles), and in Ax, playing from the score, he had a sympathetic advocate, alert to every nuance and icily precise in his chording and dynamics. “My desire was to state ideas and capture moods in the most direct and economic way possible”, Benjamin says. An affectionate collection if not a path-breaking one.

Mindful of the Florestan/Eusebius tensions and Hoffmann-esque intercourse of Schumann’s 1837 Fantasiestücke, without ever seeking cinematic extremes, Ax conjured eight quasi scenes from adolescence. ‘Des Abends’ and ‘Warum?’ were beautifully poeticised essays in muted legato and voicing. ‘Ende vom Lied’ was about balanced curtains of adieu F-major, Schumann’s “chime of wedding bells mingled with a death knell”. ‘Traumes Wirren’ was feathered, immaculate brilliance. ‘Fabel’ was about narrative and flashback, breathed and rhythmically defined. But did ‘Aufschwung’ soar? Was ‘In der Nacht’ under a cloud? Whereabouts the “black butterflies of melancholy” in ‘Grillen’?

In many ways, Ravel’s Valses nobles et sentimentales – Vienna, Schubert and dance distilled through fin de siècle French lens pre-1914 – was the highlight of this recital … touch, glassy registering, perfection of synchronicity and chords, the marriage of melody, cadence and harmony, here amorous, there acid, fused to perfection. The composer musing to himself came to mind. The misty epilogue, lingering and fading, Ax suspending the baritone Ds and low ppp Gs, was palpably about echoes and dreams – “all these waltzes rising gradually out of the blurred memory [mingling] gracefully and a little regretfully” (Hélène Jourdan-Morhange). Atmospheric.

Given his Polish origins (he was born in Lwów, both his parents being concentration camp survivors), it’s always surprised me that Ax’s Chopin is not more intense and imbued. He plays the text and fioriture with the trained ease and grace of a complete professional, yet somehow draws a curtain across the troubled man within, hurrying where holding-back might yield the more sensorially meaningful dividend. Best of his Chopin group was the F-sharp Nocturne, replacing the advertised B-major from Opus 62. This had a simple beauty, with the kind of wondrous coda that stops time, right-hand descent and left voices coming to rest in a dark pool, a ray of setting sunlight caught in one final mezzo A-sharp. The Mazurkas went their way, the complexities and contrasts of the lengthy C-sharp minor arguably just a little matter-of-fact. The showpiece Andante spianato et Grande Polonaise brillante, one of Chopin’s early Paris visiting-cards, was pianistically unruffled (it’s long been a staple of Ax’s repertory) but, notwithstanding a hint of closing E-flat bravura, fell short on heroism. Exposed early to the old-world model, slower and more deeply felt, of Rubinstein and Michelangeli, I wondered, half-hoped, if we’d get something of their manner, a maturing of the years perhaps, with the Andante spianato – but Ax has always liked it brisk (witness his 1975 recording). He’s not going to change now.

Raising the roof requires an artist on a greater adrenalin charge, a Steinway that doesn’t sound acoustically as though it’s in a distant empty hall, and an audience larger than the one which turned up. The house, though, nearly did come down fifty minutes before the start. An ear-shattering, body-blasting explosion that rattled windows, moved the earth, and had wildlife scurrying and crows screeching. A rogue space rock missed by NASA? A plane crash? Saffron Hall is less than fifteen miles from London Stansted. Neither – but a sonic boom triggered by two scrambled fighter jets escorting a flight back to the airport. Extraordinary experience. Haven’t heard one since the fifties … later Concorde.