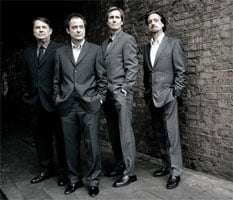 Having released (earlier this year) its selection from Dvořák’s ‘middle’ and ‘late’ string quartets for Deutsche Grammophon under the title of “Old World New World”, the Emerson Quartet musicians gave a flavour of their approach to this composer’s music in this BBC Radio 3 Lunchtime Concert. Customarily first- and second-violin duties were rotated, with Philip Setzer leading the Terzetto and Eugene Drucker the quartet.

Terzetto, written for the unusual combination of two violins and viola, is an attractive work of bright sonority and lyrical invention. Here it began rather inauspiciously. The overall tone of the players was warm, but with vibrato applied so liberally the flowing introduction left a strong, sugary aftertaste. The thick sound dominated the first two movements, with sentimentality in abundance, but once they reached the more rustic scherzo the Emerson members became leaner of tone, and the music benefited considerably, the use of vibrato was judicious, bringing through the composer’s more rhythmic writing; and the finale continued in the same vein, its variations strongly characterised before a vigorous finish.

The Opus 61 String Quartet is one of the lesser-performed of Dvořák’s works for the medium, overshadowed by such as the ‘American’. It is however a substantial and highly attractive piece, the result of a mere 16 days’ work on the part of the composer for music that is structurally rigorous and with a profusion of melody. The Emerson Quartet gave an effective performance, the only curiosity being a strange timbre acquired by some of the pizzicato notes on David Finckel’s cello, reverberating through the wooden box on which he was sitting. This aside there was much to commend the performance, which began once again with excessive textures but showed much more dynamic variety and rhythmic profile.

Dvořák’s invention was to the fore, whether in the beautiful close to the opening movement, with violins in thirds and the cello playing open fifths, or in the curious moment towards the end of the Poco adagio where uncertainty creeps in, the music suddenly questioning. Here the musicians found depth of emotion in Dvořák’s writing, balancing the lyrical passages with those flickers of doubt. The rustic scherzo had restless urgency, the trio putting this at ease somewhat with an almost imperceptible move from minor key to major. The finale, its melodic ideas concentrated and shared between instruments, enjoyed clarity and plenty of character, with Lawrence Dutton’s contribution on viola especially persuasive. The third of Dvořák’s Cypresses was a well-chosen encore, nicely restrained.