This is the second of three concerts in which the Emerson Quartet plays Bach, a recent string quartet (two are UK premieres) and a ‘Razumovsky‘.

The Emerson sound is immediate, projected at a greater height than is usual: three of the players, save the cellist, stand. Bright Sheng writes of them: “each member is not only a splendid virtuoso, but also a passionate and superb musician.”

The delight of the Bach is the textual clarity obtained. Where the Fugue or the Contrapunctus has four parts, each has a string instrument available to express it. All entries of the theme, let alone any inversions or other modifications of the original, can be clearly established (by the player) and identified (by the listener). The works’ nuts and bolts are laid out before our ears. Each main phrase, approximately the same length, is played at a similar volume. The overall effect is clinical and monotonous and renders the listener virtually superfluous. Passion – vigorous but rather gentlemanly – is part of the mixture, too. Mystery, daring and surprise are absent, too. 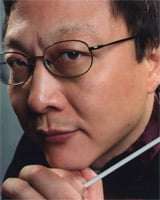 Bright Sheng’s one-movement quartet is extremely demanding. It contains no miracles – the title refers to the supreme skills of the Emerson Quartet members and to Bartók’s The Miraculous Mandarin. Sheng’s is a work of contrasts and rhythmic versatility. Two themes contest – one harsher than the other, one more fleet and scampering, one at a recognisably higher pitch. Gradually they make accommodation. The rhythms become less nervous and agitated, and the middle register becomes predominant. An individual musical intelligence is at work.

Razumovsky No.2 was impressive and clinical. The emotions, the awkwardness and spikiness, and the startling and abrupt originality of this great work were laid out before us vigorously – and on a plate. This was passion to order, played with immaculate co-ordination and finesse – each phrase and section of the material clearly judged and painstakingly considered. I did not delight in this music-making, however highly accomplished. There was no room to be engaged. I felt pushed out – with plenty to hear, but nothing that required active listening.

The encore – one of Webern’s 5 Pieces (Opus 5) – showed otherwise. The miniaturist skill and freshness of both writing and performance was captivating. I actively listened – rapt – to every note.