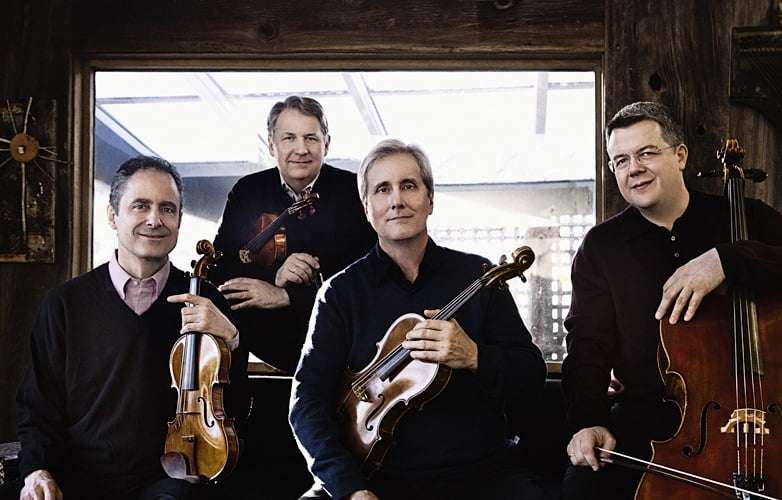 In their final years Beethoven and Shostakovich immersed themselves in writing String Quartets and composed some of their greatest and most profound music. In this Emerson Quartet recital the key of B-flat (major or minor) dominated. Beethoven originally intended the Grosse Fuge to conclude Opus 130 but was persuaded that its length and complexity was too much. Consequently, he wrote a shorter and lighter Finale. The difference in temperament between these Beethoven works and Shostakovich’s Opus 138 is apparent as well as extraordinary: the meditative passages in the former’s works generate warmth and serenity, while the troubled, sometimes bluntly brutal, character of the Shostakovich evidences an embittered temperament.

At this concert the Emerson Quartet displayed many talents and opened with Opus 130, giving full effect to contrasts in the slow introduction. The ensuing Allegro nipped along smartly, and after a lively, skittish Presto, intensified with strong accents, the Andante con moto revealed Beethoven’s wry, yet childlike, sense of humor, an indication of Haydn’s influence. The succeeding alla danza Tedesca, with its thrusting thrice-repeated strokes that parallel those appearing in the Shostakovich to come, had a sweet, charming folk-like character. A tender serenity graced the lyrical ‘Cavatina’, and the re-written Finale, played with agility, was an appropriate if conservative way to conclude this structurally adventurous work.

The Shostakovich opens with a pensive viola solo on a twelve-note melody, which contains much of the material from which the piece is fashioned, played with disquieting calm – an eerie, nocturnal atmosphere began to develop. A strongly asserted three-note figure from Shostakovich’s Fourteenth Symphony written the year before (1969) curiously recalled the effusive outbursts that interrupted the stillness that opened the first movement of Op.130. Macabre effects, such as tapping on the wood of the violin, generate a spooky quality, and lightning-bolt dissonant thrusts disturb the austere atmosphere. A feeling of aimless meandering in an unearthly mysterium pervaded this account. Occasionally, scraps of playful figuration try to transform this unsettling atmosphere without success. The Emerson members have the full measure of this disturbing work, playing with grit and determination. To be effective this strange work should not rest easy on its listeners. It did not.

The complex Grosse Fuge is just as challenging, one of the most impressive, extensive and complex fugues ever written. It is a daunting task to display its interwoven counterpoint clearly, so that not just entrances of the theme in its various permutations but each line of its interwoven network are produced clearly and distinguishably. Such was the accomplishment of the Emerson Quartet. Concise, clean and perfectly balanced, this performance revealed Beethoven’s brilliant conception and the extraordinary talents of this superb ensemble.