This poignant programme, realised for the BBC Radio 3 Lunchtime Concert at Wigmore Hall, brought together two works by close friends in the autumn of their lives. Shostakovich wrote his penultimate String Quartet in 1973, two years before his death, while Britten’s Third such work, his last major piece, was completed in the year before he died. 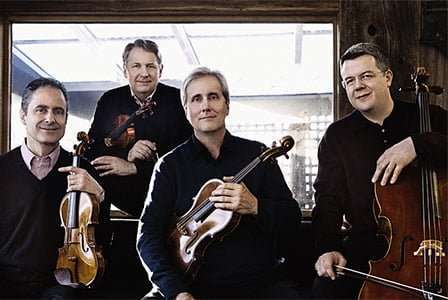 Shostakovich turned to the string quartet as his primary means of expression later on in life, attaining a profound and concentrated style that is both restrained and deeply expressive. Textures are often reduced to one or two instruments at a time, while melodic phrases are elongated and often without tonal confines. The Fourteenth is dedicated to the cellist of the Beethoven Quartet, Sergei Shrinsky, and his equivalent in the Emerson, the recently appointed Paul Watkins, led off confidently with bold but uneasy expression. This set the tone for a conversational first movement, whose guarded idiom gave way on occasion to faster music of forced gaiety, before introspection returned. The second-movement Adagio spoke of sorrow and regret, with a particularly striking solo from Philip Setzer, on first-violinist duty. The thoughtful counterpoint was again provided by Watkins, the cello taking a prominent role throughout. The finale took a more incisive and determined stance without breaking through to truly fast music, but at its root lay a troubled serenity, the players’ tuning beautifully secure.

In 1960 Britten and Shostakovich struck up an immediate friendship through a meeting arranged by mutual acquaintance Mstislav Rostropovich. Britten’s The Prodigal Son (1968) was subsequently dedicated to Shostakovich; in return the Russian composer inscribed his Symphony No.14 to Britten the following year, and its UK premiere was conducted by him at the 1970 Aldeburgh Festival.

Perhaps not surprisingly the opening of Britten’s final large-scale composition (written for the Amadeus Quartet) is closer in musical language to Shostakovich than arguably any of his other writing; yet as the first movement, ‘Duets’, progresses the stylistic similarities become less obvious, and it is fascinating to observe the musical cells criss-crossing between pairs of instruments. This time Eugene Drucker took the lead-violin part, and found a blend of calm and sadness in the phrases – but underneath it all, as in the other three parts, was the fierce resolution that ensured Britten finished the work despite badly failing health. Both scherzo movements are terse and more than a little bitter, the ‘Ostinato’ relentlessly exploiting its four-note phrase and the ‘Burlesque’ no less forceful in its Beethovenian drive. Between these was the aching ‘Solo’, where Drucker, despite occasional lapses of intonation, played with a depth of feeling I have rarely heard him reach, and as the music soared higher so it was possible to think of birds circling overhead. In the last movement, which Britten leaves open-ended, in a gesture that speaks of beginnings rather than ends, these sentiments were evident in the steady, resolute tread of the ground bass here entrusted to Watkins, a reassuring presence even when the harmonic language above it became more twisted. The final chord hung on the air, though Watkins stayed a little longer, meaning the ear expected the start of the passacaglia theme once again.

After such an affecting performance an encore was a risky move, but it gave the concert some humour when announced by the cellist, who declared himself “the only English speaker in the group”. He also assumed a prominent role in the slow movement of Haydn’s G minor String Quartet (Opus 20/3). A little too much vibrato, perhaps, but affectionately played nonetheless.