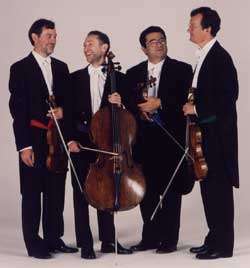 The Endellion Quartet, in residence at Cambridge University since 1992, continued with the second in its six-concert season at West Road Hall. The Endellion Quartet is known for championing contemporary works and also a commitment to scholarship, to increase understanding of the quartet-form from its roots. This season at Cambridge University is no exception; it presents the full cycle of Haydn’s Opus 33, and this programme offered a peek into the Central European soul of the quartet repertoire, with Bartok’s powerful first example and Dvořák’s upbeat ‘American’.

Haydn had ample opportunities to experiment with the medium of the string quartet, for which he was largely responsible; he wrote around 70 such works, often by commission in sets of six, each work different to the last. In Opus 33/Number 3 the eponymous bird takes the form of grace-note figures that flutter in and out throughout, most ingeniously in a single variation, which quickly returns to the first theme in the unexpectedly brief second movement. The Endellion members approached the Haydn at a delicate volume, with playfulness that didn’t lack for expression or lyricism. The performance of the first three movements felt a bit restrained. The musicians did though regain momentum in the finale, a Slavonic dance that provided a thematic link to the Bartók and Dvořák compositions.

Béla Bartók was another game-changer in the string-quartet realm. His first example, written in 1909, in places calls subtly to mind the quartets of Debussy and Ravel as well as to a greater extent the influence of Wagner and Richard Strauss. Max Reger? Schoenberg’s First Quartet? Who knows for sure? Still, despite any influences, Bartók owns his music, and it’s entirely original in structure, and born of his (unrequited) passion for violinist Stefi Geyer. But the piece is also there for the borrowing, and the Endellion musicians adapted it readily and effectively to their particular interpretation: in the first few measures, amidst gradually revealed and novel tonalities, a conversation takes place between two violinists with distinct personalities.

In Dvořák’s “jolly” (Andrew Watkinson) ‘American’ Quartet, the players, with quick tempos from the off, moved the music brightly through melodies that, to Dvořák, represented the New World and those more typical of his native Bohemia. This performance was warm and intimate, with few of the Central European rhythmic and expressive mannerisms too often over-applied to Dvořák’s music. The composer may have been happy to spread schmaltz on his bread, but his music doesn’t lend itself to false sentimentalism, as this performance finely displayed. The finale sustained Dvořák’s intended optimism, merely slowing the tempo sufficiently to explore the more-distant echoes of Europe before returning to America.