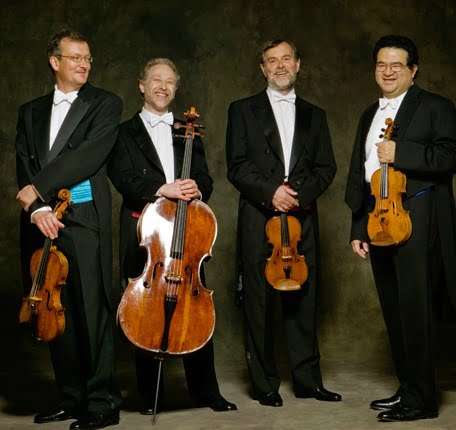 One should always guard against approaching a concert as “another Endellion Quartet evening” or a “standard Endellion Quartet recital”. Even when a string quartet has been going for almost forty years, every concert is different and brings new problems. I learned afterwards that two of the members, Ralph de Souza and especially David Waterman, were rather under the weather. Such problems did not show in their performances, which were typically penetrating and satisfying.

The musicians made a confident start in Haydn’s final completed String Quartet, and Garfield Jackson’s first little solo was played with terrific intensity, as if to remind us that even if Haydn did not completely free the second violin and the viola, he did allow them a little autonomy. With Andrew Watkinson playing the first-violin part with equal ferocity and the other two joining in where they had a chance, Haydn’s counterpoint and his interesting key-changes were well pointed up. The Minuet was a real Scherzo in the sense that it was immensely witty, and its contrasting Trio was thrown into relief. The wonderful variations of the Andante, taking an almost simplistic tune as their starting point, were beautifully realised. Haydn starts with just first violin and the cello, and the varied instrumentation is just one of the master touches which make this movement so haunting. The Finale was both very serious and tremendous fun, a typical Haydnesque paradox. What a tragedy that he could not complete the third work in the set, which would have been in D-minor.

When I admitted recently on Facebook that I do not really like Bartók’s Third and Fourth Quartets I received the social-media equivalent of pitying glances. I should say that I have been listening to them for nearly sixty years, and perhaps am now running out of time to appreciate them fully. The Endellion members’ performance of the one-movement Third was wholehearted and held the piece together very well, but despite all their efforts, the various ‘effects’ still sounded like add-ons rather than organically essential devices. Marvellous phrases came and went, but they were succeeded by less convincing ones. The players clearly love the work, something which was confirmed in conversation afterwards. For those who share my doubts, I can at least say that it is quite short!

The second half of the programme was taken up with Beethoven’s First ‘Razumovsky’, the String Quartet equivalent of his ‘Eroica’ Symphony. Here I would like to draw attention to two basic traits which help to make the Endellions’ Beethoven so convincing: they make the right sound, and they observe the note-values exactly. It is on the aspect of sound that some transatlantic ensembles fall down when playing Beethoven, and recently I heard a young American group play fast and loose in this very work.

When you hear what Beethoven wrote, and the players know how to express it in tone, it makes all the difference. The Endellion musicians kept the opening movement up to tempo and made it tremendously exciting, as they exchanged phrases without dropping a stitch. This aspect became even more enjoyable in the scherzo-like Allegretto. In the recording studio, the opening bar or two would have occasioned a re-take, but the players were soon throwing little snatches of music about with a sort of controlled abandon – Beethoven learnt this from Haydn but took it to a more powerful level. The contrasting passages were finely done, too. The Adagio was played with concentration and spiritual feeling and rose to an immensely resolute climax. Watkinson’s linking cadenzas were ever so slightly scrappy but, when it came, the Finale was delightfully launched by Waterman’s cello and the rhythm was always airborne, the coda fiercely intense.

As an encore, we heard the amazing little Presto from Beethoven’s late B-flat Quartet, Opus 130, which both preserved the mood and made a perfect bon bouche with which to send us home.

A final thought: as I have mentioned before, the Endellion Quartet always places Haydn before Beethoven. I suppose the Bartók had to come second, otherwise one would have had a huge influx of conservative Wigmore patrons after it, but it would have made a very interesting programme to have had the Beethoven first and the Haydn last.