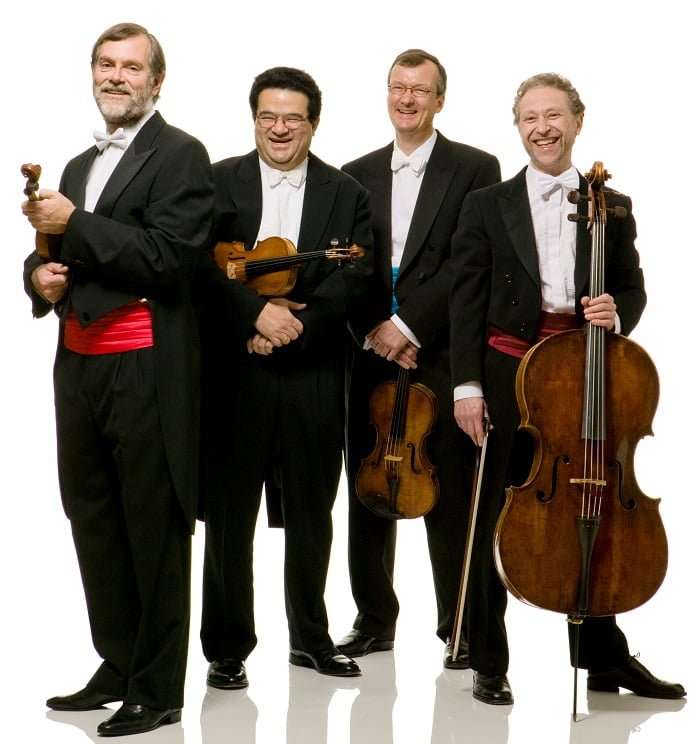 Hearing the Endellion Quartet play Haydn is like eavesdropping on four of those learned men of the Scottish Enlightenment arguing and disputing in an Edinburgh coffee house – the friendly discourse is on that sort of level. It is salutary to reflect on how these gentlemen’s comprehension of Haydn has deepened: 30 or so years ago, their Haydn seemed rather polite; now they hew the great opening movements out of the living rock. They started out on the Allegretto of the D major, Opus 76/5, with a firm purpose that signalled serious matters to come. This Allegretto which ends as an Allegro is an extraordinary creation, halfway between a set of variations and a sonata movement, and the Endellion members gave every aspect due consideration. Then on to the wonderful Largo ma non troppo: Cantabile e mesto, which they sustained beautifully, plunging into its great moment of release with every fibre of their being. The Minuet and its Trio were style personified, and then we had that amazing comic-opera finale, where the superbly timed interplay among the instruments had me imagining Haydn pursuing one of his favourite sopranos down the corridors of Eisenstadt or Esterhazy. A delightful end to a performance of real substance.

I learnt my Janáček from the Smetana Quartet, whose late-1960s recordings were my passport not just into this composer, but into Czech music as a whole. The Endellion musicians took a less pungent view of the ‘Kreutzer Sonata’: the tempos seemed a little broader, the narrative more reflective. Yet there was much to engage the listener’s mind, not least the committed projection of the inner parts by Ralph de Souza and Garfield Jackson – the latter, whose viola had shone out in a couple of places in the Haydn, seemed to be having a particularly good evening, and the viola part is the ‘engine-room’ of this work. Janáček wrote the ‘Kreutzer Sonata’ not for his earthy Moravian colleagues but for the more refined Bohemian Quartet of Prague, so a ‘classical’ view is perfectly valid. And what a haunting work it is, its opening motif one of the composer’s most inspired ideas.

After the interval we in Wigmore Hall were offered a truly heroic view of Schubert’s great G major String Quartet. How far quartet-writing had travelled between Haydn’s Opus 76 and this masterpiece, constantly gazing into the abyss in its first two movements! It is difficult to visualise the dumpy, sociable, shortsighted Schubert harbouring such anger and anguish in his soul. Whereas Beethoven in his late string quartets appears to be coming to terms with his approaching death – albeit with a certain amount of fist-shaking, as in the Grosse Fuge – Schubert is openly challenging the gods on their own ground.

The great songs of Winterreise and especially the Heine settings of Schwanengesang such as ‘Der Atlas’ are cut from the same divine cloth as is D887, which takes the concept of bitter-sweetness to new heights. Andrew Watkinson led his colleagues in a consummate realisation of the Allegro molto moderato, not too slow, yet broad enough to illuminate every one of its pages and ensure that each of Schubert’s poignant harmonies had its effect. I was grateful that the exposition repeat was not observed – I have never known it add anything except length to a performance. In the Andante un poco mosso, David Waterman’s cello line was a heartbreak and the terrifying outbursts had their full weight. Those who call this movement too ‘orchestral’ are missing the point – like the first movement, it needs the sensation of four players straining against the limitations of their instruments.

The nimble Scherzo brought some relief: its Viennese Trio, on a par with that in Mozart’s E flat String Quintet, was taken quite fast but seemed to fit the tempo of the outer sections. Here I must make a criticism: given one of the most ingratiating melodies in the repertoire, Waterman did not allow each note to register clearly. I would not mention it, had I not noticed similar lapses from him in the Minuet of Schubert’s A minor in the Endellion’s November Wigmore concert (in the repeated quotation from ‘Die Götter Griechenlands’). The tarantella-like finale is always a severe test of intonation and the battle was not always won on this occasion, but it is more important to keep Schubert’s inexorable pulse going than to play every little black note in tune. The Endellion musicians stuck to their task and gave us many little beauties along the way. There were many cheers – the players looked shattered, as well they might be.