The Endellion String Quartet has embarked on its 41st and final season. Three of those have been in place since the start and Ralph de Souza, the most ‘recent’ arrival, has been second violinist since 1986. This concert confirmed that they are a great Classical quartet but, like the Amadeus before them, less sure of foot in nationalist Romantic music. 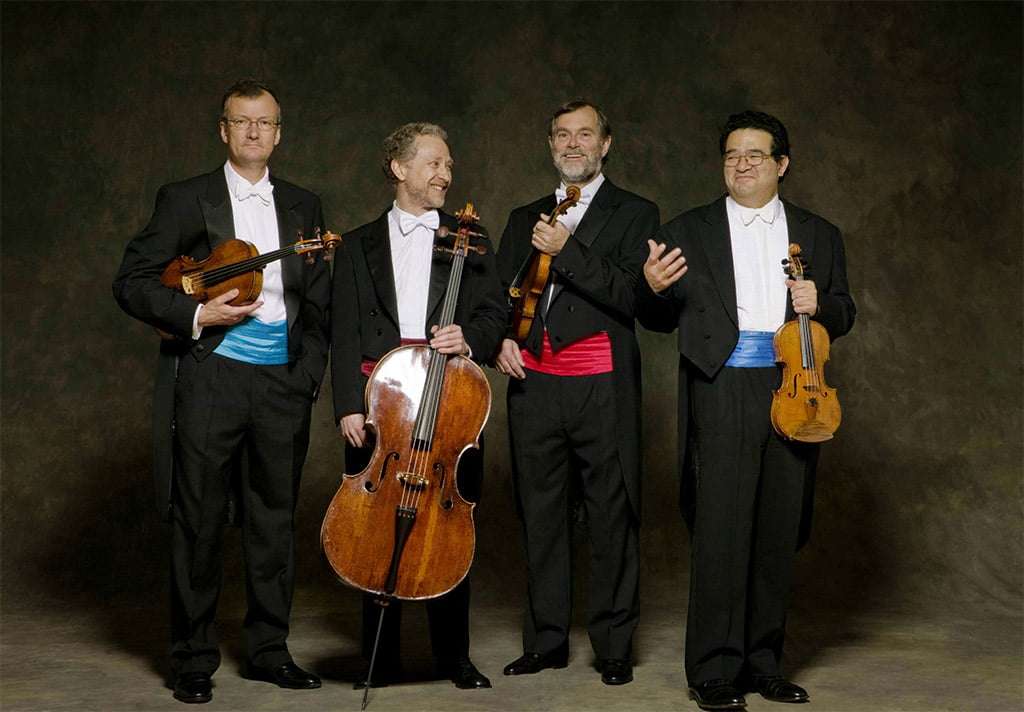 The Quartet began with one of Haydn’s greatest creations, which would be much better known if it had attracted a nickname like its predecessor in Op.64, the ‘Lark’. As the Quartetto Italiano used to show us, the E flat is memorable in every way, from its delightful initial theme to its witty ending. The Endellion, experienced Haydn players, found the tempo giusto for that first theme and settled down to a really relaxed and satisfying conversation, taking the composer’s contrapuntal excursions in their stride. They found a wonderfully broad tempo for the heart of the work, the noble Andante, but braced up manfully for its contrasting B flat minor section. The Minuet and Trio were truly danceable and they had fun with the Presto rondo finale, finishing with a witty flourish and a smile.

David Waterman usually gives a little speech before the second item in a programme, and gives thanks to the Quartet’s sponsors before saying something about the next work. He indicated that the players enjoy performing Smetana’s autobiographical First Quartet and as three of them launched the opening movement and Garfield Jackson let fly with the viola’s searing fanfare, it seemed that all might be well. But to anyone raised on the Smetana Quartet’s many performances of this masterpiece, what followed was not impressive. I never like to describe any chamber opus as ‘orchestral’ because I do not know any orchestral chamber music, but there is no denying that some of Smetana’s quartet writing is quite a ‘heavy play’. There was too much compromised intonation in the Endellion reading; a passage towards the end of the Polka badly needed clarifying; the dance rhythms lacked the required lift; the terrifying harmonic E in the finale, by which Smetana signalled his tragic deafness, failed to have the desired electrifying effect; and in general, worthy intentions did not translate into an idiomatic performance. Of course there were good things: Jackson’s viola solos made their mark, not just in the Allegro vivo appassionato but also in the Allegro moderato à la Polka; and Waterman’s cello was eloquent in the Largo sostenuto. The quiet ending to the finale brought a pleasing close but also a feeling of relief and the notion that this piece – like Borodin’s Second which I once heard them play – was not really their métier.

After the interval we travelled to Mount Olympus for Beethoven’s Op.130. At once the players seemed in their element as they explored the opening movement of this celestial serenade. The little Presto was genial, with a light touch; the Andante really was ‘con moto ma non troppo’; and the Alla danza tedesca was marvellously lopsided without the accents being overstressed. The outer movements of the Cavatina were gravely sung, with feeling, but the contrasting section was muffed. I follow Adolf Busch in believing that the Late Quartets are about Death. For me, the Cavatina, which used to make Beethoven himself weep, is about consolation: in the outer sections, the composer attempts to console us with the feeling that Death can be borne; then he suddenly realises that his own dissolution is imminent; the first violin – marked ‘beklemmt’ or choked up, hovers above the other instruments almost like an out-of-body experience, before Beethoven takes control of his emotions again and returns to the consolatory mood. Both Busch and Peter Cropper of the Lindsay Quartet used to achieve this effect, at a slower tempo than the Endellion’s.

Of course, the knowledge that we are approaching the Grosse Fuge, Beethoven’s original massive finale to Op.130, always takes a little of the focus off the Cavatina; and for this reason it may be better as a rule to play the substitute Allegro – again Adolf Busch is our guide and by taking it at a slightly slower tempo than usual, he and his Quartet make it more substantial on their great recording. But it is good to hear the Fugue in its intended place occasionally. The Smetana Quartet used to pull off this tour de force in concert and I have heard others manage it.

The Endellions immediately seemed at home in the Fugue, achieving coherence in its more stressful passages in marked contrast to their playing of similar passages in the Smetana, where they had sounded overstretched. I remember discussing the Fugue with Norbert Brainin of the Amadeus, in the context of certain interpreters (even Busch) who had preferred to record it with chamber orchestra. Brainin’s feeling was that the Fugue demanded the feeling of individual responsibility that only a Quartet could bring to it – and that was what we got from the Endellions. They kept the music moving forward inexorably but found time for profound expression, within Classical limits, in the quieter moments. The whole structure was exposed to us, yet they avoided any academic dryness. The final pages were beautifully timed, bringing huge applause from the sold-out hall.

It will be hard to say goodbye to the Endellions – they will be at the Wigmore again onFebruary 12 and July 16 next year, and they have a Beethoven cycle looming up in Cambridge – but they will have left us with many memories of exalted playing. The best parts of this concert were of that order.