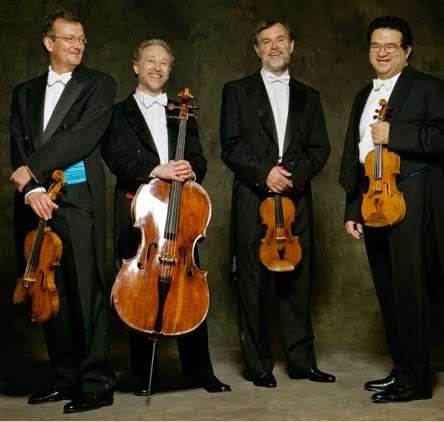 I have always been dubious about Joseph Joachim’s ‘historical’ system for planning concerts, and I recall being critical of the Endellion Quartet some years ago for placing a late Haydn before an early Beethoven in a lunchtime concert. On paper this Wigmore Hall programme looked perfectly logical, but in practice it would have been much better to place the Tchaikovsky work second, before the interval. Either of the Classical works would have made an ideal piece with which to end the concert; but as it was, they were awkward bedfellows.

The Endellion members made a confident start in the ‘Fifths’, really attacking it so that the full vigour of mature Haydn was brought before us. Every player was at full stretch in the Allegro, with inner parts given maximum value and all four revelling in Haydn’s wonderful counterpoint. The Andante made a delightful interlude: although it is not strictly a set of variations, Haydn does vary his serenade-like melody and much of the responsibility rests on the first violinist – Andrew Watkinson was not found wanting. The canonic Minuet returned us to the energy of Haydn and its cumulatively exciting Trio was superbly executed. The Finale was taken fast, almost too fast, and I could imagine the first-violin part being more wittily timed; but all in all, it was the sort of dashing, no-holds-barred Haydn performance that one rarely hears – perhaps it takes thirty-five years to accumulate this kind of daring!

After such drama, the opening of Mozart’s A-major sounded almost apologetic and it took a while for this particular listener to get on to its wavelength – perhaps the fault was also partially in the playing, but if so, we were soon involved in Mozart’s world, so different from Haydn’s. This is Mozart’s longest String Quartet and although it has been given the nickname ‘Drum’ by the Austro-Germans on account of the cello part in the final variation of its Andante, in the English-speaking world it has always been slightly overshadowed by the ‘Hunt’ and ‘Dissonance’. As the Endellion musicians got down to their task, the beautiful polyphony of the Allegro, more vocal and flowing than Haydn’s, was unfolded and we could appreciate the liveliness of the inner parts – throughout the evening, Ralph de Souza’s very positive violin-playing and Garfield Jackson’s plangent viola tone were much in evidence. The Minuet and Trio were absolute delights and the great variations were thoroughly absorbing, especially the poignant minor-key one. The Finale was cleverly timed, right down to the gentle wit of the quiet ending.

Following the interval, the Endellion players surprised me with their penetration and finely executed bowing in the slow introduction to Tchaikovsky’s F-major. I have never especially connected them with Russian music – one of the few disappointing performances I have ever heard from them was a Borodin Second, many years ago when David Waterman was using a rather small cello. Apparently they play all the Tchaikovsky Quartets and there was much to enjoy here, although even they could not do much for the opening movement, once that affecting Adagio introduction was out of the way. The Moderato assai is one of those movements where Tchaikovsky’s technique falters. His pupil Taneyev, a basically more skilled composer though not blessed with Tchaikovsky’s fund of melody, would never have made the mistake of bashing away at the same rather banal eight-note figure, as if mere repetition would improve it. (Tchaikovskians will recall that this Quartet was blessed at its birth by the very best of fairy godfathers: the first performance was led by Ferdinand Laub – whose death not long after led to Tchaikovsky’s much greater Third Quartet – and its St Petersburg premiere had Leopold Auer in the first-violin chair. But Anton Rubinstein was thoroughly grumpy about the F-major and I am sure its first movement had much to do with the equivocal reception.)

With a sigh of relief, I relaxed into the Endellions’ lovely playing of the lilting, memorable Scherzo, with its dancing Trio; and no one could possibly complain about their heartfelt involvement in the Andante, where such commitment made one forget that the melodic content is quite limited. The lively Finale, complete with one of Tchaikovsky’s excursions into ‘learned’ fugal writing, ended an evening that was not perfect – or even perfectly planned – but always invigorating and stimulating.