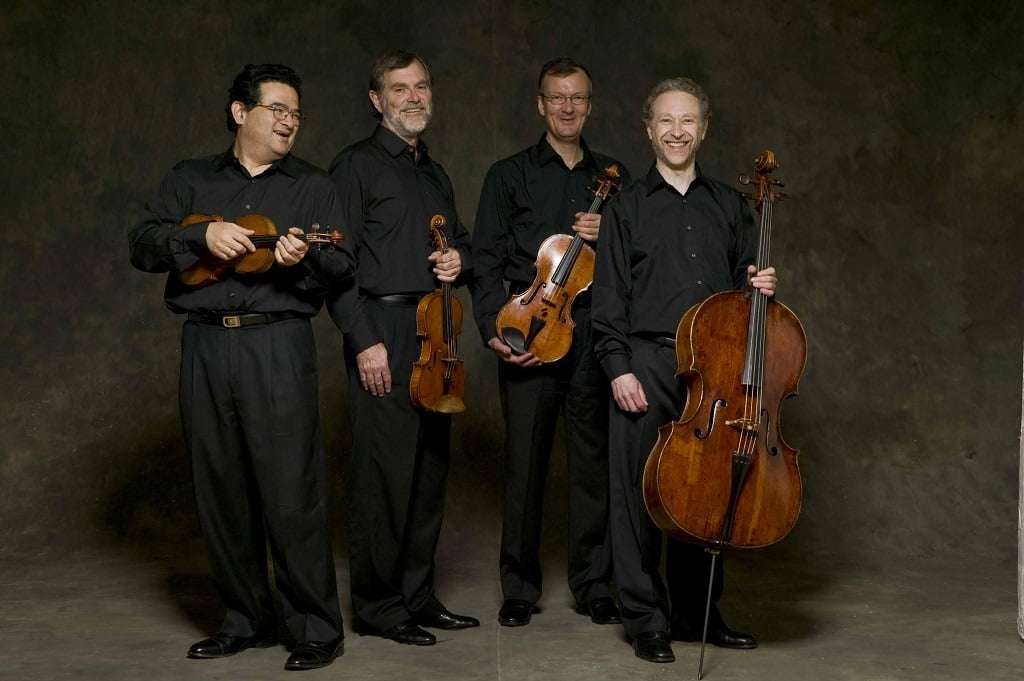 Formed forty years ago, the current and long-serving members of the Endellion Quartet walk more gingerly onto the platform than of yore – particularly David Waterman, who revealed after this concert that he is suffering from an agonising sciatica-like pain in his right leg, emanating from some pressure at the base of his spine. Fortunately for us, it did not show at all in his playing, and we must hope he will find medical relief.

I used to make it almost a life’s work to disagree with the late Hans Keller, but I was forced to admit that he had a point when he bemoaned the lack of attention given to Mendelssohn’s String Quartets. The situation has changed since those days: most ensembles play at least a few of them, and there must be half-a-dozen-or-so terrific complete cycles on CD – my present favourite is that by the Escher Quartet. The Endellion musicians launched into his brilliant D-major Quartet with total conviction and the opening theme, with its spectacular first-violin part, flourished despite some less than perfect intonation. The second subject is one of those hymn-like themes which used to get Mendelssohn an undeserved reputation for sentimentality, mainly, I would say, because less talented British Victorians aped the surface characteristics of his style without replicating his inner tension. It was played here with a straightforward simplicity that melted the heart. The first of two much gentler inner movements is a Minuet, which has the character – though not the time signature – of a siciliano. It was beautifully interpreted, as was the following Andante with its pizzicatos. Brilliance and panache returned with the Presto con brio Finale, although here again there was an emollient second theme which the players relished.

Benjamin Britten’s Third Quartet was written at Hans Keller’s suggestion for another ensemble in its fourth decade, the Amadeus, and Keller received the dedication. The Endellion musicians have always played it well and have twice recorded it. On this occasion Andrew Watkinson, who occasionally slipped from grace intonationally elsewhere in the programme, stayed heroically in tune in his many exposed passages. Much of the work demands utter transparency and the players were equal to the task. The Quartet is in the Bartókian arch form and the second and fourth movements demand a robust approach which these players can now rise to effortlessly. The final Recitative and Passacaglia, subtitled ‘La Serenissima’, brought fine moments from all four participants and was sustained movingly – it must be one of the most affecting things Britten wrote, and fittingly it came almost at the end of his career.

Beethoven’s Second ‘Razumovsky’ sounded thoroughly authentic following the interval. These players have long been among the best Beethovenians, so it was just a little disappointing to find the composer’s repeat scheme flouted in the opening Allegro. At this stage of his creativity Beethoven did not do anything simply because it was the convention. He did not write an exposition repeat in the First ‘Razumovsky’ but rather threw in a misleading ‘false repeat’, which leads me to assume that he meant every single repeat in its successor. In other words, each repeat is an integral part of the work. To miss even one is, as I have remarked before, like demolishing a wing of Blenheim Palace because you cannot be bothered to maintain it. The Endellion players gave us nine excellent minutes of Allegro but fourteen would have been even better! They made amends with an intense Molto adagio and a well characterised Allegretto – this Scherzo is on a most lavish scale, which only serves to confirm me in my opinion that Beethoven wanted a substantial first movement. The final Presto brought well-deserved applause and a delicately played encore of the ‘Fuga a 2 Soggetti’ which makes up the Finale of Haydn’s Op.20/5.

The Endellion Quartet will return to Wigmore Hall on December 6, with guests Jonathan Kelly and Roderick Williams for a programme to celebrate the life of that great oboist, Neil Black, and raise funds to establish an award in his memory; then January 20 (birthday concert) and May 29.