This concert, concluding the Endellion Quartet’s fortieth-anniversary Wigmore Hall series, was very satisfying. It began with perhaps the musicians’ trump card, Beethoven. We have some splendid Beethoven ensembles today – the Belcea, for one – but when the Endellions play his music, the ‘fit’ is supremely natural. The early F-major Quartet, probably composed second in the Opus 18 set but placed first because of its strength, gave the composer no end of trouble, nicely summarised in Misha Donat’s programme note. In June 1899 Beethoven sent a copy of the score to his friend Karl Amenda, but two years later he asked Amenda to put it under wraps, because he had made so many changes. The Amenda family kept the manuscript and it surfaced at the start of last century. Several recordings have been made: to mention just two, the Wihan Quartet members included it in their first Beethoven cycle and the Endellions put it into their highly recommendable Beethoven box. 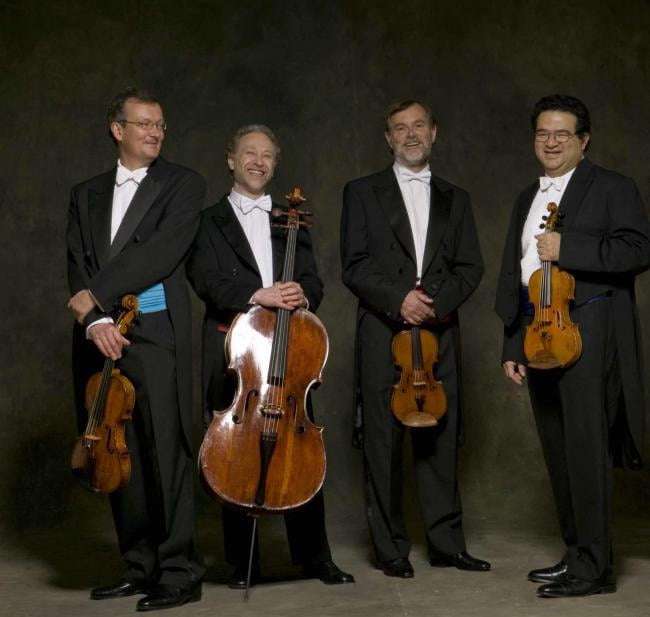 Undoubtedly the revised version is better in every way, and in a performance like this one it comes across as a fully finished masterpiece. The Endellions batted little motifs back and forth in the outer movements with friendly aplomb, not forgetting some ‘learned’ counterpoint in the Finale. From the very first notes it was clear that the players were in their best form. The great Adagio brought out all their rare ability to plunge into profundity as if it were the most natural state of mind – the Busch Quartet had it too. It is from Amenda that we learn Beethoven’s original inspiration for this Adagio, the Tomb Scene in Romeo and Juliet – Beethoven’s sketches bear it out. But Romeo and Juliet is a tragedy of incredible frustrations (I write this just days after watching the similarly frustrating West Side Story again on television), whereas in Beethoven’s vision there is only tragedy, profundity and spirituality. We heard it all in this account, and then the Scherzo, kept well up to tempo, provided some relief. A lofty performance.

With the help of sponsors, the Endellions had commissioned four five-minute pieces from favourite composers who were all present at the concert to hear the first London performances. In a short speech, David Waterman said there were very few such short pieces for string quartet – I think there are more than he supposes, but let it pass.

Jonathan Dove’s Vanishing Gold chimes with the current anxiety about climate change and the extinction of so many species who share our World. He was thinking specifically about two tiny amphibian creatures, the Golden Toad of Costa Rica and the Golden Coqui (a frog) of Puerto Rico, both of which appear to be extinct. The two-note call of the Golden Coqui begins and ends the piece, and in between comes beautiful music mostly evocative (for me) of Central and South America.

Giles Swayne’s Endellionigma is an ingenious set of variations on a theme which itself is a variation of a theme that is only suggested as a ghostly presence at the end. Certainty eluded me, but I was able to confirm with the composer my impression that the theme-of-the-theme is Elgar’s Enigma theme! The piece starts with four pulses, beginning with the cello and moving up through the ensemble, each pulse a little more elaborate than the last. Gradually the disparate elements come together until the players are all agreeing on Swayne’s theme. The important thing was that it sounded like a good piece of music.

Prach Boondiskulchok’s Ritus consists of four small Portraits, each one highlighting one of the instruments and a time of year: ‘Shoots’ belongs to the first violin, ‘Crickets’ to the second, ‘Skein’ to the viola and ‘Melting’ to the cello. In addition the composer had analysed the natural resonances of the St Endellion church in Cornwall for his harmonic framework. What emerges are four very effective little fragments – I especially enjoyed the viola and cello Portraits.

Sally Beamish’s A Myndin is one of several pieces she has written to mark her departure from Scotland, where she lived from 1990 until recently. It is a very beautiful piece and it gave Garfield Jackson the chance to unfurl his very best tone – his melody then taken up by David Waterman’s. Andrew Watkinson and Ralph de Souza are also given some evocative effects.

Like the other three works, the Beamish was beautifully played and the audience clearly enjoyed hearing four such valid but different glimpses into the workings of a string quartet.

Critics like to have at least something to criticise, as it shows that a) they have been awake throughout the concert and b) they are not writing a slice of hagiography. My scrap of criticism is that the Scherzo of Schubert’s ‘Death and the Maiden’ was a little too slow – at the Endellions’ tempo a hint of doggedness crept in which was not part of Schubert’s plan. Otherwise this was yet another fine interpretation. The terrifying contrasts of the opening Allegro, which may have frightened Ignaz Schuppanzigh into rejecting the work, were fully realised; the magnificent double variations on the song ‘Der Tod und das Mädchen’ were superbly characterised, the seraphic fourth bringing a real moment of sublimity; and at the end of a tiring evening the tarantella Finale was nobly sustained.

A brief word about exposition repeats: we heard that in the Beethoven but not in the Schubert, a good solution in my opinion. Normally a glutton for repetitions, I have never heard an ensemble really justify the long repeats in Schubert’s D-minor and G-major Quartets. It has become de rigueur for players to include the equally long expositions in the C-major String Quintet and the B-flat Piano Sonata, and in those cases I am not going to complain!